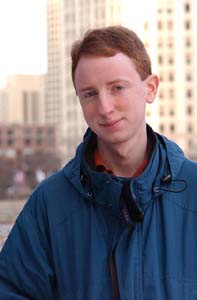 Yesterday evening, the buzz was that Harvey was the smart money to take home the title today. Skill-wise, he was ranked just behind Kai in the Top 8, and Budde would probably have to fight his way past both Jensen and Finkel to make it to the finals. Dustin Stern is the latest great product of the Madison Limited scene. He was hyped at Pro Tour – Los Angeles 2001, but is only just now coming into his own. For the draft, Harvey got to choose his seat, and by extension Stern's. He stuck Stern in the eighth seat to limit his control over his colors. That gambit paid off, but it wasn't clear by the end of the draft who had the advantage. They sat across from each other in the pit and shuffled quickly.

Harvey had won the flip, so he was first on the board. His Elvish Warrior outclassed Stern's Glory Seeker. Harvey, ordinarily soft-spoken, was practically inaudible as he cycled Disciple of Malice. He passed his turn back without playing a third land. Stern added a morph to the table. Harvey drew and did not react. Swamp appeared on his side of the board, along with Wirewood Elf and Festering Goblin.

Stern untapped, and shrugged before sending with his morph alone. Harvey paused, but let it though all the same. Stern followed up with Screeching Buzzard. Harvey's Warrior fought back, and he played a morph. An all-out attack put Harvey deep in thought. He put his morph in front of the Glory Seeker, and Festering Goblin on Stern's morph. Stern put damage on the stack before unmorphing Daru Lancer. Harvey saved his morph with Vitality Charm.

He hit back with all three of his creatures, leaving Stern at eleven. He had another forest but no follow-up. Stern was stuck on four lands as well. Crown of Suspicion on his Buzzard made racing all the more attractive. The bird and Lancer shot back, and now Harvey was at nine. True Believer made striking back difficult.

Worse yet, he had no play. His five available mana fronted a supposed Gourna. Stern hit again, and this time Harvey's morph blocked the Lancer. It hit the graveyard unceremoniously, revealed to be Treespring Lorian. Gustcloak Sentinel meant Harvey would need something special to survive. He did not have it.

Both players led with Festering Goblins, but Harvey had a Disciple of Malice to follow it up. Stern played a plains and handed it back, looking at no more lands in hand. Harvey fired in with both his guys, trading the Disciple for Stern's Goblin, then made a Severed Legion.

Stern ripped the plains. Down came Whipcorder. Harvey was not so fortunately. His three swamps enabled a second Severed Legion. Stern stemmed the bleeding with Crown of Suspicion on the Goblin.

Then Stern pulled a swamp, and dropped a colossal Soulless One. Now Harvey's offense looked like it was completely stymied. He had a trick up his sleeve. A Crown of Suspicion of his own enchanted one of his Legions and attacked. Stern didn't want to risk eating eight damage, so he traded his 5/5 Soulless One for the enchanted Legion.

And now Stern was rolling. First Glory Seeker, then Gustcloak Savior and Anurid Murkdiver. Harvey still found only swamps. He scooped his cards rather than wait one turn for the killing blow.

Harvey didn't say a word as he folded his first seven cards back into his deck. His next six still had him shaking his head. Stern watched the Jensen-Budde match next door, concealing any excitement he felt at Harvey's misfortune. Harvey's five were acceptable, and they were off.

Harvey led with a turn-three morph, and Stern's slow hand prevented him from doing anything better than Sandskin. Harvey had a second morph at the ready, and Stern held had no action at four mana. Harvey bashed for two. Stern played Oblation at end of turn, reshuffling his Sandskin back into his deck. He moved to untap. 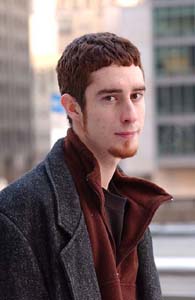 Stern smiled and shook his head at his forgetfulness. Daunting Defender hit the table to shut down Harvey's offense. Harvey's reply was a 1/1 Soulless One. Stern brought in another Defender and swung for three. Harvey had Cruel Revival and returned fire for five. However, he had no answer for Soulgazer, and the other Defender hit for three.

In fact, he had no play at all on his turn. Improvised Armor on the Soulgazer was a suckerpunch. It bashed Harvey to nine. He unmorphed Treespring Lorian at end of turn and brought it in for five, still sitting on his mana. Stern served in the air. A Gourna decloaked to take a hit for the team. Stern wasn't out of action. Sandskin neutralized the Lorian, and True Believer joined his side.

Harvey Infested, then finished the Daunting Defender with Crown of Suspicion. That left just the pantsed-up Soulgazer. It was clear that it would be enough. Gustcloak Harrier and a morph from Stern were added insurance. Two attacks ended it.

Stern was clearly unsatisfied with the conditions of his victory, two mana-stumbles and a double-mulligan, but there was nothing he could say to Harvey. The two exited the Feature Match area in silence.