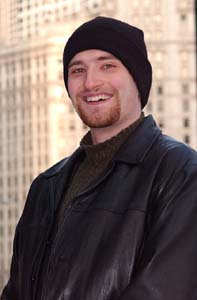 In a Top 8 filled with accomplished players, Fabio Reinhardt is the odd man out. His only real accomplishment is winning a few PTQs, but considering the players surrounding him today, his skill can't be questioned.Jon Finkel used to be considered the best player in the world, until Kai convincingly took that title away from him.

His finishes had become less impressive with time, and this weekend's tournament was the last Pro Tour Finkel was qualified for. In fact, he didn't even plan on coming until a few days before the event, and it's a good thing he did. This Top 8 makes Finkel the first player to reach ten Pro Tour Top 8 finishes. It also gives him some extra Pro Tour points to stay on the Tour for a while, and he has an opportunity to make a run at yet another big tournament victory.

There was a lot of friendly banter between both players before the match started, as they discussed their respective studies.

Both competitors started playing creatures in the form of morphs. Reinhardt attacked and they traded (he had Charging Slateback, Finkel had Skirk Commando). The parity battle continued as both players once again played morph creatures. This time, Reinhardt's survived combat when he flipped it over to reveal Mistform Shrieker.

Finkel cast Riptide Shapeshifter, which died to Pinpoint Avalanche. Reinhardt also cast Imagecrafter. Finkel made a morph creature, and when the Shrieker attacked again it turned face up to reveal an Ascending Aven, which blocked and traded with Reinhardt's 3/3 flier. Reinhardt had another morph, while Finkel was out of creatures.

Surprisingly, Reinhardt played Lay Waste on an island when Finkel had seven lands in play, instead of cycling it to draw a card. Finkel summoned Menacing Ogre, and each player picked three as a number. The Ogre got his bonus, and attacked for five damage. Reinhardt dropped Gratuitous Violence, shifting the game in his favor as he attacked for six damage with his morph and Imagecrafter. Solar Blast killed Reinhardt's morph on main phase (Skirk Commando), and Finkel attacked for another five points of damage.

Mistform Mask provided a way to stop the Ogre beats by changing creature type to Wall each turn, and Sage Aven let Reinhardt dig into his deck for more threats. Finkel confidently tapped out for Slipstream Eel, and Reinhardt attacked for two with his Aven, bringing Finkel down to one life point. He followed with his own Slipstream Eel, and the game seemed all but over.

Reinhardt summoned a Mistform Wall, and Finkel had Mistform Dreamer. The Wall changed creature type, attacked for one, and was joined by a morph creature. Finkel used Erratic Explosion to kill it (Mistform Shrieker) and attacked through the air for two points of damage. Finkel was stuck at three land, and Reinhardt brought out Avarax to increase the pressure on the board. After taking a considerable amount of damage, Finkel played a morph and kept his Dreamer back to block.

Choking Tethers tapped them down for a successful attack, and Finkel played a second morph creature. Essence Fracture bounced both morphs, and that was enough tempo advantage to finish the job.

Finkel opened with a second turn Voidmage Prodgy. He had no turn three play, and Reinhardt played a morph. Once turn four came it was obvious that Finkel's draw didn't have many inexpensive creatures, as he played a fourth land and passed the turn. Choking Tethers was cycled to tap down one of Reinhardt's morphs, as he brought out a second. Voidmage Prodigy attacked and was not blocked, allowing Commando Raid to take out one of Reinhardt's morphs (Charging Slateback).

Mistform Wall gave Reinhardt a blocker, while Finkel played a morph creature. It flipped over on Reinhardt's end step to reveal Ascending Aven, and it started attacking for three a turn. Reinhardt's morph attacked back for two, since Finkel obviously didn't want to trade with his Voidmage Prodigy. 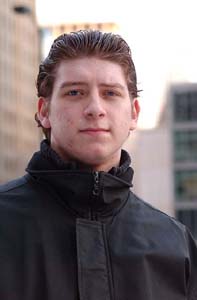 At this point in the game, the Prodigy was creating a game of chicken. Reinhardt had Sparksmith and Slipstream Eel in hand, and was looking to force Finkel to sacrifice the Prodigy to a lesser card. He finally bit on Mistform Dreamer, allowing Sparksmith to resolve. Finkel stole it with Threaten, and had the Goblin shoot itself. Finkel's morph blocked and traded with Reinhardt's in combat, leaving the board as Reinhardt's Wall to Finkel's Aven. Finkel's Riptide Shapeshifter was Complicated, and both players cast their own Slipstream Eels.

Essence Fracture cleared Finkel's side of the board, and the following attack brought him to four life points. At this point, Reinhardt had a full board on the table and the game won in the next turn or two. However, vintage Finkel emerged to take the game at the last moment. His Slipstream Eel came back out, got haste thanks to Fever Charm, and attacked for the win. The crowd was stunned, Reinhardt seemed a bit shaken, and Finkel was the perfect example of confidence.

It morphed up, but Reinhardt used Choking Tethers to tap it before blockers. Reinhardt played a morph, which fell to Pinpoint Avalanche (Goblin Taskmaster). The Aven stayed back to stop the Dreamer, and Reinhardt summoned a very threatening Slateback capable of swinging for eight damage. Essence Fracture bounced Finkel's blockers, and Reinhardt attacked for the win.

Finkel's morph was matched by Reinhardt's Mistform Wall. It flipped over to reveal Ascending Aven, and flew over for three damage. Lay Waste took out the only island Finkel had on the table. The Aven attacked again, and Finkel played a fourth mountain. Mistform Shrieker threatened to trade with the Aven, but Finkel dropped an island and killed it with Pinpoint Avalanche to keep the clock going. A morph added some additional resources on the ground for Finkel, and Reinhardt played a morph of his own. Choking Tethers slowed down the Aven beats for a turn, and Finkel summoned Riptide Shapeshifter. Reinhardt's Pinpoint Avalanche took care of the Aven problem, and Finkel did nothing on the following turn but play a land.

Sparksmith made Reinhardt's board look much better, and was followed by a second Mistform Wall. Finkel paused to ask the judges about Aven Fateshaper's creature type, and sacrificed the Shapeshifter to get it. Once again, Threaten stole the Sparksmith and Finkel made it shoot itself, and the Fateshaper attacked for four to bring Reinhard tdown to seven life points. Reinhardt was one mana short of being able to cast Slipstream Eel so he cycled it, and was lacking options to handle the 4/5 flying monster.

Instead he looked to outrace with Avarax, but had a lot of work to do since the attack merely brought Finkel down to thirteen. Menacing Ogre hit play, and Finkel chose one while Reinhardt chose zero. The Ogre stayed back and the Aven attacked once more. Reinhardt couldn't find an answer, and conceded.