stonia, a team that earned an impressive 11th place finish in last year's World Magic Cup, featured the return of both Hannes Kerem and Simon Robberts from last year's team. Kerem, the Pro Point leader of the team with 49, also had a notable Top 4 finish at the 2008 World Championship in Memphis.

Their opponents had a little less than a quarter of the Pro Points that Kerem earned in his lifetime, and yet, the team has been impressing all weekend. Iceland has a combined 12 Pro Points between their players, with Alvin Orri Gislason representing them as the country's Pro Point leader and national champion. The Magic scene is not large in Iceland, which has a population of only 300,000 people. Nonetheless, the country set their sights on getting onto the world stage with a Top 32 finish, the goal they set for themselves.

And then they just kept winning. After Stage 1, they found themselves in the Top 16. Three rounds later, and they were in the Top 8. 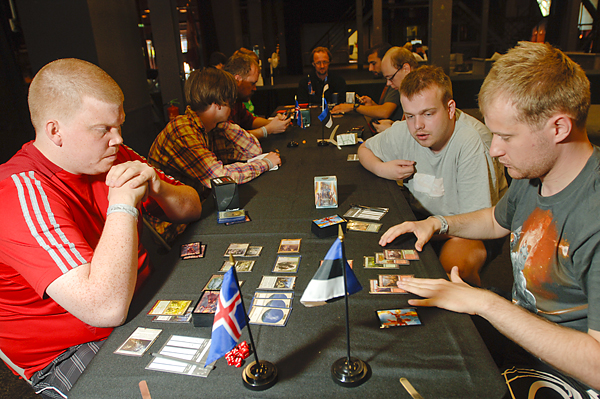 Estonia and Iceland face off in a Quarterfinal match featuring a team with faces from last year on one side and a team that was just happy to be here on the other.

The teams, all featuring very sporting players, shook hands as they took their seats, shuffled up, and began their matches.

The match between Icelandic national champion Gislason and Estonia's Kaasik did not last long. In the first game, Gislason had some early Domri Rade action to keep his hand replenished and Blood Artists off the table, leading up to Thundermaw Hellkite to put Kaasik's back against the wall early. While Blasphemous Act bought Kaasik some breathing room, Gislason's follow-up Ghor-Clan Ramapager was able to seal the deal over the course of two more turns.

The second game went even faster, with Kaasik having to mulligan into a six-card hand that featured lands that could only come into play tapped. Meanwhile, Gislason's start was just as fast as in the first game, with Thundermaw Hellkite coming down to give Iceland an early lead in their match.

The Blue-White-Red Flash mirror, as expected, took some time, with Haroldsson and Robberts both building up their lands and dancing around in single-digit life totals. It was all in a fight to see who would resolve a Sphinx's Revelation, which culminated to a large turn where Robberts was at 6. When Robberts attempted a Warleader's Helix to gain some life and drop Haroldsson a little closer to 0, Haroldsson fought over it with his own Warleader's Helix, and a counterwar ensued at the end of Haroldsson's turn, resulting in no real change in life total and Haroldsson tapped out. 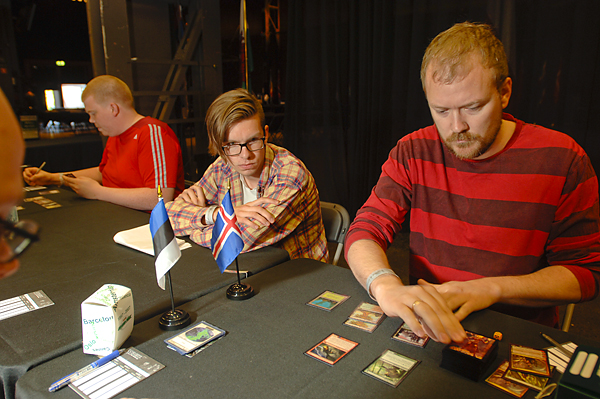 Iceland's Hedinn Haroldsson settles in for the long haul in his first game.

Robberts immediately untapped and led off with a big Sphinx's Revelation for six, going to 12 life and drawing a new hand. Haroldsson did the same, drawing five cards, and both players were back to square one, with Haroldsson representing countermagic after his card-drawing spell.

The two continued to dance off, grinding out small advantages and changes in life with Moorland Haunt tokens, an Augur of Bolas or two, and for Haroldsson, the occasional Mutavault activation. Eventually, Robberts was brought low enough in range to drop to Warleader's Helix from Haroldsson.

But before they could even finish sideboarding for their second game...

...Sigurdsson locked things up in two brutal games against Raidma. In the first game, Sigurdsson had early aggression with Cartel Aristocrat and Voice of Resurgence, while Raidma sought to go over the top with a turn four Thundermaw Hellkite.

The second game featured a showdown between dueling Scavenging Oozes, with both players jockeying to feed onto the creatures that were traded off in the previous turns. This became a lot less relevant, however, when Sigurdsson began to draw spells and Raidma's draw steps turned up lands. One of those spells for Sigurdsson was Abrupt Decay, which took out the opposing Ooze and let him start attacking in despite a low life total.

Hellride from Raidma wasn't enough, and Estonia's future in the tournament became grim when Blood Artist appeared on the next turn, going well with Sigurdsson's already in-play Cartel Aristocrat and spirit token. Despite that, Sigurdsson played conservatively, attacking with only his 1/1 token each turn until he built up a board. 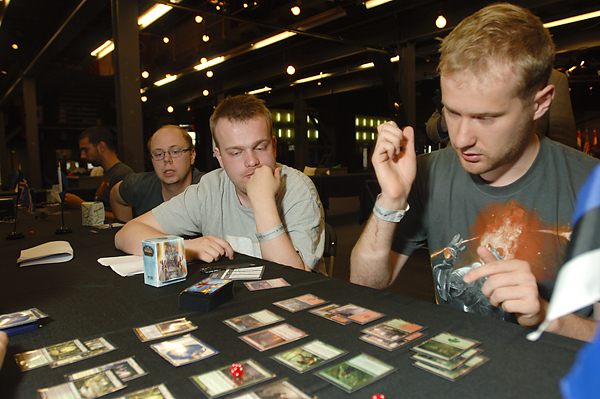 Estonian coach Hannes Karem watches to see if any of Rauno Raidma's draw steps yield a solution to their opponent's growing board.

Voice of Resurgence a turn later, and then another creature to sacrifice to his Cartel Aristocrat slowly turned things around. Raidma fell to 10, then lower when he had to start chump blocking the large Ooze and elemental token left behind from Sigurdsson's sacrifices Voice of Resurgence. "Nine lands. Okay..." said Hannes Karem, Estonia's coach, who watched helplessly as his teammate could not draw any spells.

A second Hellrider came on the final turn, but it was too little too late, with their Icelandic opponent at a comfortable life total thanks to Blood Artist and the Scavenging Ooze. Sigurdsson's Blood Artist and Cartel Aristocrat could combine to end the game should Raidma attack, and the two Estonia players offer Sigurdsson the handshake, dead to rights on the next turn. 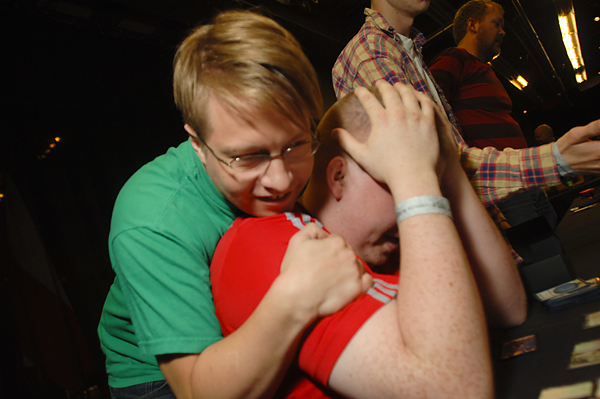 Iceland's dream of a World Magic Cup win lives on.