Two of Hong Kong's finest squared off in this quarterfinal match. The ante was steep. The pressure was on. Both players, however, maintained an air of sportsmanship and fun.

Tong applied pressure early. He began with Sunscape Apprentice and Disciple of Kangee. When Au Yeung rallied with a Disciple of his own, he kicked up an Ardent Soldier and Faerie Squadron. In this way, he was able to stay one step ahead of his opponent's defenses, pushing through a few damage each turn. Au Yeung was at six before he could take a breath. 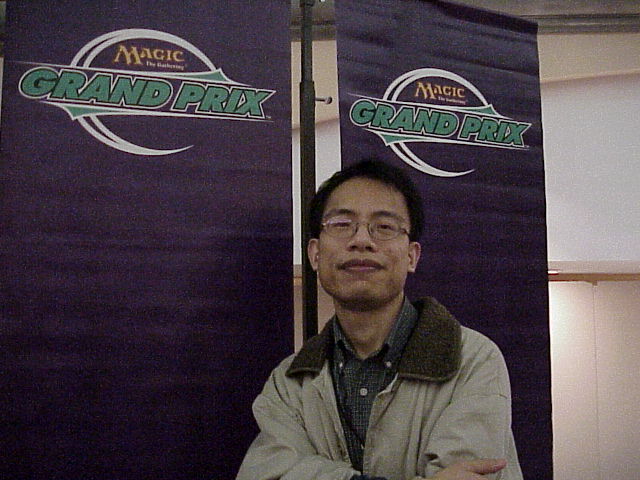 The game stalled at this point, neither player drawing anything of consequence. Au Yeung finally found a seventh land. This let him drop Goham Djinn while still keeping the Squadron tapped with his Apprentice. He had seven creatures on the board to Tong's nine.

One of them was Spirit Weaver. Together with the Disciple, they made for a blocking nightmare for Au Yeung. He was forced to take another three damage from the Squadron, hoping to stabilize the board without losing creatures chump blocking. He bounced Tong's biggest threats with a Nightscape Battlemage. Tong pushed through a flying Prison Barricade. Au Yeung was at one. Two turns later, Tong had more flying attackers than Au Yeung had blockers, and won the game.

Game two was much more drawn out. Au Yeung had a Crypt Angel on turn five. Tong's creatures were all white, so he couldn't break through. Au Yeung made a Goham Djinn as well. It was a mere 3/3, but it could start wrecking house. Tong played a Zanam Djinn that teaches a university course on the subject.

Au Yeung Shackled it, then forgot it was there and sent his Djinn running into it. Lucky for him it regenerates. After that he seemed to take control. He hit in the air with his Angel. In his eagerness to get Silver Drake into play, he tapped out of white mana. This let Tong use his Apprentice to put his Zanam Djinn on top of his library, destroying the Shackles.

Au Yeung tried to race him. The dust settled on two turns of combat with Tong at two and Au Yeung at one. Tong sent five creatures to the air, and took the match.