This is one of the two Brazilian-on-Brazilian matches in this Quarterfinals. These two are a bit "foreigner" out here since they are from Rio de Janeiro (which has a bit of bitter rivalry with Sao Paulo). They shook of the nervous jitters with some small talk and deck discussion before the match.

Felipe started with a juicy Careful Study: Roar of the Wurm and Deep Analysis. He followed that with Wild Mongrel making Barreto's start (Yavimaya Barbarian and Call of the Herd) pale in comparison.

Olle Rade showed up on Desiderati's side, getting Andre into deeper trouble. The Mongrel killed the Barbarian and Barreto used Firebolt to finish it off before playing a second Barbarian.

When Felipe reached four mana the Roar got flashbacked into the table. Andre tried to use Fire/Ice to kill the Safekeeper but Felipe had no qualms losing a land. Temporal Springs killed the Call of the Herd.

The Roar and Barbarian traded hits bringing Felipe down to ten and Andre down to fourteen. Barreto tried Firebolting Olle Rade and this time, down to three lands, Desiderati allowed it.

The Roar brought Andre Barreto down to eight before Felipe played Wild Mongrel. When Andre tried Wild Mongrel Desiderati had the Counterspell for it. Feeling confident enough he paid the Flashback for Deep Analysis going down to seven.

Desiderati's nerves showed when he made a mistake announcing Temporal Springs but he still felt confident enough to send both creatures in. Knowing he would draw an useless Barbarian Ring on the next turn - courtesy of the Springs - Andre Barreto conceded. 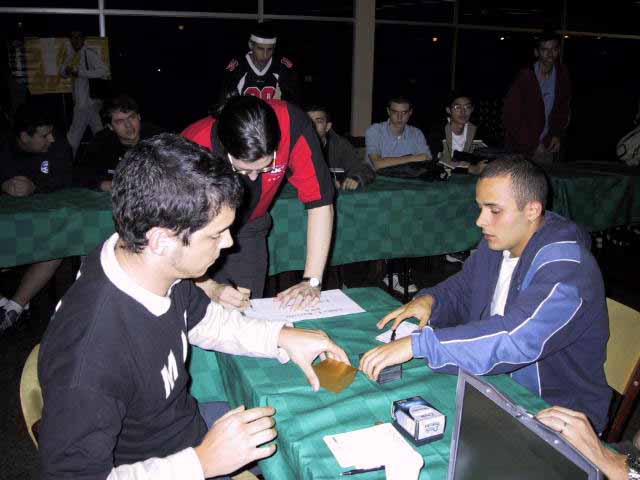 Shuffling up for game two.Again Felipe's first turn Careful Study placed Deep Analysis and Roar of the Wurm in the graveyard. But this time Andre's start was a bit better: Grim Lavamancer, Wild Mongrel and Basking Rootwalla.

Fire/Ice took out a freshly cast Werebear before Sylvan Safekeeper came into play. Despite the massive pressure Desiderati felt confident enough to pay the Analysis' flashback.

After deep consideration Andre Barreto sent his whole crew in. After a sleight misunderstanding with blocking assignments Olle Rade took one for the team in front of Wild Mongrel and Desiderati fell to ten.

To hold the fort he played his own Wild Mongrel before using Quiet Speculation to drop three Roar of the Wurm into play. He now had his four Roars in the graveyard.

Andre played Flametongue Kavu to blow the Mongrel out of the way but Desiderati had two lands and Wonder to discard. In came a Roar and Andre's best chance was to find a way to swarm for enough damage. If he could do that his Lavamancer would finish things.

So he played another free Rootwalla and sent everyone in. At ten Felipe agonized over blocking assignments for a few seconds. In the end he fell down to three and killed Flametongue Kavu. He was still facing four creatures, one of them Lavamancer, at three life.

In came the second Roar but it was to no avail: Andre had Violent Eruption in hand.

For a third consecutive time Felipe fired a first turn Careful Study, but this time "only" discarding Roar and a land. On the next turn he played a second Study, this time getting Analysis into the graveyard, and Sylvan Safekeeper.

On the next turn the Roar token came in. Barreto needed something bigger and he got it: Shivan Wurm! Desiderati had Temporal Springs for it but couldn't attack because of the Centaur.

The Shivan Wurm showed up once again and once again Felipe used Temporal Spring to get it out of the way. On the third attempt the Wurm bounced the last creature: Phantom Centaur.

Once again Desiderati had Temporal Springs and this time this left the road open for the Roar token. Andre replayed Phantom Centaur and Grim Lavamancer but another Study gave Desiderati a way to drop Wonder into the graveyard.

He couldn't, so he conceded.