Naoki Shimizu took his seat for the Quarterfinals with nervous excitement written on his face. "It's the same chair," he said, pointing. "The same as my last feature match." He won that match over Stanislav Cifka to earn his spot in this Top 8. This is his second crack at Sunday play. The last was at Pro Tour Austin, where he first came into the public eye with a third-place finish. This weekend he's played a version of the popular White-Red-Green deck that keys off the power of Wolfir Silverheart, Huntmaster of the Fells and Restoration Angel.

His opponent is no stranger to the bright lights of the Sunday stage. Gaudenis Vidugiris Top 8'd the last Block Constructed Pro Tour nearly a year ago in Nagoya, losing in the quarterfinals in a tight match against Fabien Thiele. He's looking to improve on that here. He's playing what could very well be the deck of the tournament, the White-Blue-Green deck created for Team SCGBlack by mastermind Sam Black. Invisible Stalker, Geist of Saint Traft, Wolfir Silverheart, Spectral Flight, and Increasing Savagery give the deck explosive power matched by few decks in the format. 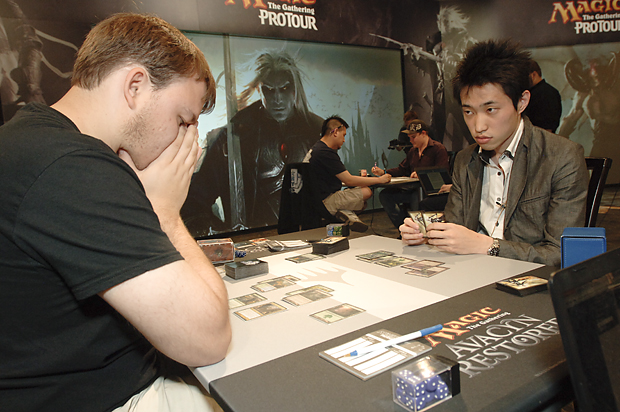 Naoki Shimizu and Gaudenis Vidugiris have both made their return to the Sunday stage of the Pro Tour.

Vidugiris's finish in the main tournament gave him the option and he chose to play. He kept his opener. Shimizu did not. He shuffled up a new six and stared hard at it, then closed his eyes in concentration. With a heavy sigh he decided to keep.

Vidugiris led out with forest and Cavern of Souls on Spirits while Shimizu fetched Forest with Evolving Wilds, then played Clifftop Retreat and Avacyn's Pilgrim. Vidugiris untapped and drew his card, then shook his head. He had no third land.

Shimizu attacked for a point and played another Retreat. Vidugiris drew his card slowly and his reaction was mixed. Evolving Wilds meant he would have to wait yet another turn for his spells. He got got a reprieve, however, when all Shimizu could do was attack for 1 and play a third Clifftop Retreat.

Vidugiris searched out an island, then untapped and played Geist of Saint Traft. Shimizu had nothing but a Kessig Wolf Run and a second Pilgrim. Vidugiris fetched out a second Island and got ready to bring the pain. Four mana suited up the Geist with a pair of Spectral Flights. 10 damage sailed through the air. Faced with this, Shimizu untapped, then scooped up all his cards with a flourish.

Geist of Saint Traft soars through the sky and leads Vidugiris to his first game win in the semifinals.

Shimizu's deck refused to cooperate again, forcing him down to just five cards in hand before the game began.

They matched openers of Forest, Avacyn's Pilgrim. Shimizu attacked and Vidugiris accepted the trade. Shimizu followed up with Kessig Wolf Run and Scorned Villager. Vidugiris had an Abundant Growth to get mana out of Evolving Wilds and a second Pilgrim.

Obviously Shimizu was short on action. He played a forest and passed the turn to flip his Villager. Vidugiris dropped Hinterland Harbor and Geist of Saint Traft, and with Shimizu so far behind on cards was happy to trade it away when Shimizu attacked the following turn. Shimizu had no follow-up. 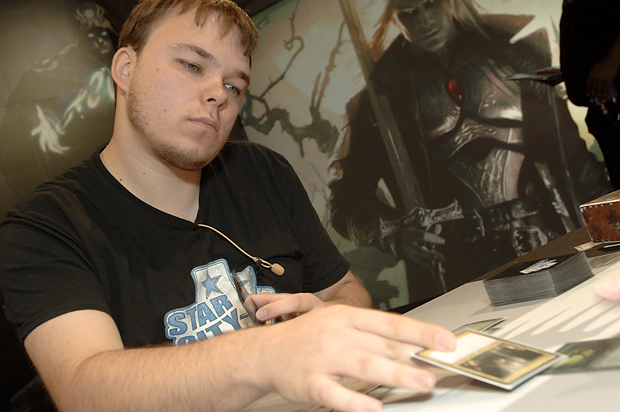 Vidugiris presses his advantage, while Shimizu stumbles on a rough hand for the second game.

Vidugiris played a replacement Geist and passed. Shimizu had a fifth land and nothing to do with it. Vidugiris hit for 6 and added Tree of Redemption to the board as a potential cheerleader on his route to victory. Still Shimizu had nothing, and a Wolfir Silverheart was enough to convince him to move on to the third game.

Finally Shimizu got to start with a full grip. He led with Forest and Avacyn's Pilgrim. Vidugiris played a Cavern of Souls on Human to get a first-turn Pilgrim of his own. Next came Scorned villager and Evolving Wilds for Shimizu. Vidugiris drew and stared at his hand for a full minute before deciding to swing for 1 and play Island and Invisible Stalker. Shimizu got a Mountain with his Wilds, then untapped and played Bonfire of the Damned for one, wiping Vidugiris's board. His Villager hit for 1 and he passed.

Vidugiris played a land and tapped out for Wolfir Silverheart, bonding to the Avenger. Unfortunately for him, Shimizu had Zealous Conscripts waiting in the wings, stealing the Silverheart for an all-out attack. Vidugiris was able to chump and stay alive for one more turn, but that was all.

Both players started with Evolving Wilds. Vidugiris fetched Island, then played Hinterland Harbor and Invisible Stalker. Shimizu got Mountain, then played Forest and Scorned Villager. Vidugiris hit for 1, and a Cavern of Souls on Spirits enabled Geist of Saint Traft. Shimizu played a Huntmaster of the Fells and passed, mentally crossing his fingers.

Vidugiris played a land and Abundant Growth on his Island, but had nothing more to do on his turn than attack for 1 with Invisible Stalker. Shimizu tapped five for Wolfir Silverheart, pairing with Huntmaster, then attacked with Huntmaster and Wolf. Vidugiris flashed in Wolfir Avenger to eat the Wolf and took six. He untapped and dropped Tree of Redemption.

Shimizu finally found white mana with Clifftop Retreat. He attacked with his Silverheart and Huntmaster. Vidugiris blocked the Silverheart and fell to 8 life. Shimizu passed without playing a spell, so he flipped into Moonscarred Werewolf and Ravager of the Fells, dealing another 2 to Vidugiris.

Vidugiris agonized over his next play, clutching his head in his hands. Eventually, he chose to play Wolfir Silverheart, soulbonding it to Geist of Saint Traft. He attacked with Invisible Stalker and Geist, but Shimizu had hooked him. Tapping four, Shimizu flashed in Restoration Angel, flickering the tapped Wolfir Silverheart and soulbonding to it. The now 7/8 angel blocked the token, and the Silverheart devoured the Geist. Now Shimizu's position was dominant.

Flicker shenanigans with soulbound from Shimizu turn things around for the Japanese player.

Shimizu untapped and swung in with Ravager, Angel and Silverheart. Vidugiris tried to make the best of his miserable options. He blocked the Ravager with Tree of Redemption and chumped the Silverheart with his own. He swapped life totals with the Tree and fell to 6 from the Angel's damage. Shimizu played Scorned Villager, and then the final nail in the coffin: a post-combat Pillar of Flame to finish off the Tree. Vidugiris checked his next card, then scooped.

The players were forced to wait for the final game so that it could be played on camera. While Shimizu was away from the table I asked Vidugiris about the crucial play. "Yeah, I was thinking about the Angel, especially the way he reacted to getting Clifftop Retreat. I mean, he could've just been happy to be able to activate Gavony Township. The thing is, if he has the Angel there, I don't think I can win. My other play is to soulbond to the Tree of Redemption, but it's probably not enough. If he doesn't have the Angel, he's in real trouble."

They watched as Alex Hayne defeated Jon Finkel, and then as Ken Yukihiro defeated Denniz Rachid, Shimizu clapping loudest of all. He and Vidugiris took their seats and began.

With no fourth land, Vidugiris decided to take to the air, slapping Spectral Flight on the Avenger and hitting for 5. He played an Avacyn's Pilgrim and gave it back to Shimizu, who cast a Restoration Angel before untapping. He played Pillar of Flame on the Pilgrim, hit for 4 and cast Scorned Villager. 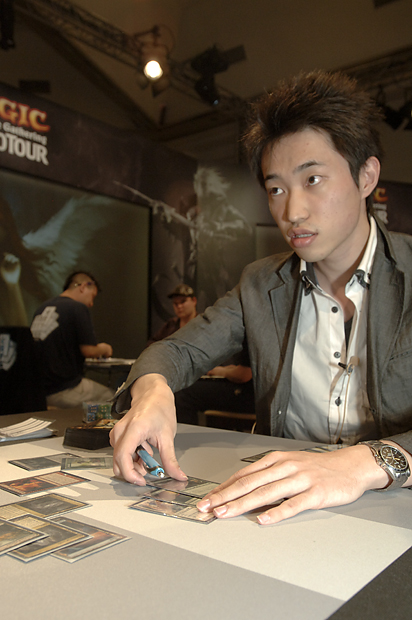 Shimizu's Restoration Angel action makes a close match against Vidugiris a nail-biter as the two players trade blows in the fifth game.

Vidugiris drew Hinterland Harbor and paused for a minute, surveying his options. His Wolfir Avenger put on a second Spectral Flight and bashed in, leaving Shimizu at 8. He passed with two mana open. Now it was Shimizu's turn to agonize. With shaking hands he tapped his lands and creatures for five mana, soulbonding Wolfir Silverheart to Restoration Angel.

Vidugiris untapped and leaned back in his chair. He counted and re-counted, trying to decide on a play. With a shrug he tapped his lands and cast Increasing Savagery on his Avenger. Restoration Angel dove in front to save Shimizu, at least for a turn. Vidugiris sat forward, sensing victory. Shimizu untapped, slowly drew his card, then sat thinking with his chin in his palm. He played Scorned Villager, bonding to his Silverheart, and attacked Vidugiris down to eight, passing with Restoration Angel mana up.

With everything on the line, Vidugiris attacked. Shimizu didn't bother prolonging his bluff, extending the hand in defeat. Vidugiris let out a huge sigh of relief and shook his hand as his crowd of supporters cheered.