As we all know, Onslaught Block Constructed is a format where blue is dead and there are no counterspells. Right? 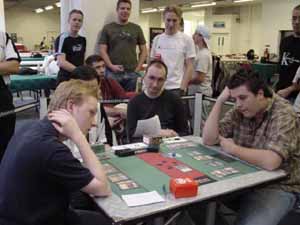 Maybe all of those blue mages who have been whining about the loss of Counterspell should take note of Mario Pascoli, who has taken his blue-white deck to the quarter-finals of this Grand Prix. There he will face experienced Dutchman Frank Karsten, who is playing red-white control. This matchup should favour Mario, whose deck is designed to be extremely effective against other control decks.

Frank and Mario each played three lands and a morph to start the match. Frank, who went first, then played his fourth land and unmorphed his not very surprising Exalted Angel. Mario, however, could only muster a Temple of the False God as his fourth land, and so could not unmorph his Angel. Frank swung for four more and made a Lightning Rift. Mario responded with the devastatingly powerful cycling of Decree of Justice for 0 soldiers. When the card which he drew from the cycling and the one from his draw phase yielded no land, he was in serious trouble. Frank’s Angel attacked, and he cycled Akroma’s Vengence to kill Mario’s morph. Mario drew for his turn and, on six life facing an Angel and a Rift, conceded.

The second game went much better for Mario as he was able to cycle Complicate and counter Frank’s third turn morph. He summoned a Silver Knight and a Stabiliser on the next turn and a morph on the following turn as both players continued to drop lands to prepare for their more powerful spells. A Starstorm from Frank took care of the morph, but the Silver Knight dropped him to 14. Mario had another Exalted Angel, which Frank took care of with Wing Shards.

Down to 12, Frank attemped to cast Akroma’s Vengeance to get rid of the Knight and Stabiliser, but found it Discombobulated. Mario’s top four cards were Flooded Strand, Stabiliser and 2 Plains, so on the next turn he used the Strand to shuffle his deck and played a DECREE OF SILENCE. This left Frank in an awful lot of trouble, unable to cycle, his next three spells guaranteed to be countered, and facing a Silver Knight. As if this was not bad enough, Mario had another Decree of Silence, so the Silver Knight went all the way.

In the decider Frank started by cycling Eternal Dragon on the second turn and playing a Silver Knight on the third turn. Mario played his own Silver Knight, and Frank had another. Two of the Knights traded and Mario was knocked down to 16. Mario had a Stabiliser but nothing for the Knight, and Frank attempted to take advantage of Mario having only two untapped lands by playing a Temple of the False God and casting an Exalted Angel. Mario bounced this back to his hand with one of the Chains of Vapor that he had sideboarded back in, and dropped to 13 on the following turn as his Flooded Strand searched out a second Island, giving him the ability to Discombobulate the Exalted Angel when Frank attempted to replay it.

Frank was continuing to play lands and attack with his Silver Knight, and Mario went to 9 life as he returned his Eternal Dragon and then laid a Decree of Silence. He played his Eternal Dragon, which traded blows with Frank’s Silver Knight until, with the lifescores at 10 for Frank and 7 for Mario, Mario found a Silver Knight of his own. Frank had cast 2 Eternal Dragons and a Spark Spray (all countered) to get rid of the Decree, and dropped to 5 on Mario’s next turn as the Silver Knights traded. He had a lot of land and 3 cards in his hand and sat there thinking for a very long time. What he didn’t know was that Mario’s hand was Discombobulate and 2 Eternal Dragons. To try to avoid death, Frank played Starstorm in Mario’s upkeep to get rid of the Dragon. Mario had a Discombobulate for that, and amongst the top four cards of his library was another. The Dragon swung in to send Mario into the semi-finals.

Pesky blue decks. You think you’ve fatally weakened them and they just keep coming back.