Quarterfinals: Gab Tsang vs Jason The 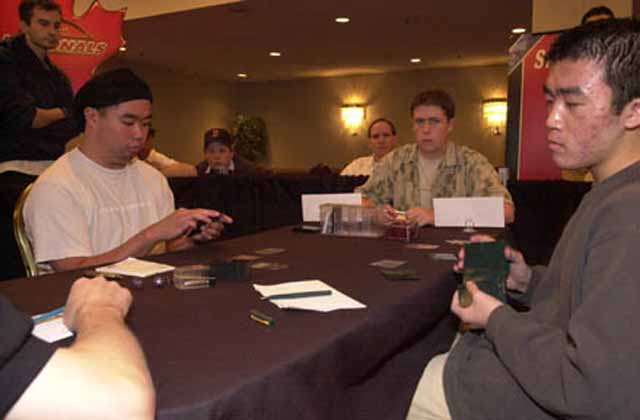 This match featured Jason The, from Winnipeg, Manitoba against Gab Tsang, of Toronto, Ontario. They are both excellent players, and although Gab has more Pro Tour experience than Jason, it was certainly not going to be an easy match. The was playing a Sabre Bargain variant with two main-deck Duresses, while Tsang was playing Accelerated Blue. The match would seem to favor Gab because of his many counterspells, but Jason's deck was a very anti-blue version of Bargain. 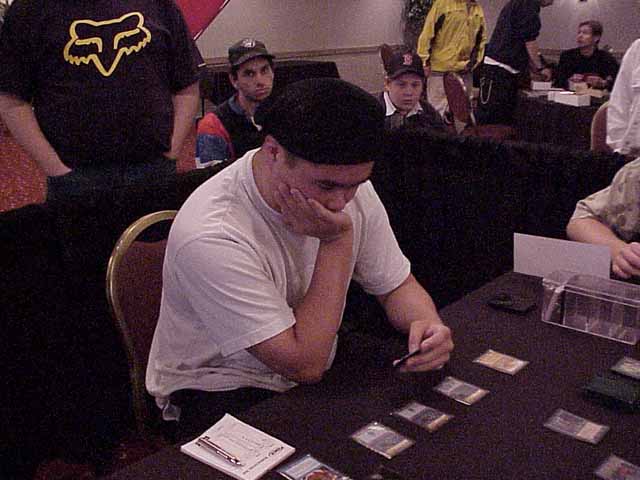 Gab won the roll and played first. Gab opened with a Port, an Island, and a Grim Monolith, while Jason played a Swamp and then Vampiric Tutored at the end of Gab's turn. He then played a Swamp, a Dark Ritual, played two Grim Monoliths of his own and dropped Yawgmoth's Bargain. This is very significant, as it gives Jason enough threats to get around Gab's many counters. Gab played a second Port and tapped one of Jason's swamps on his upkeep, while Jason drew 17 cards with Bargain. He played two Dark Rituals and a Skirge Familiar, but Tsang had a Miscalculation ready and countered the Skirge. They each just played land for the next two turns and Gab continued using his Rishadan Port on Jason's only plains. Jason played Soul Feast in an attempt to gain life, it's countered. Gab then played a Morphling leaving two Islands untapped. On his turn, Jason played Skirge Familiar and Renounce, but the Renounce was countered, and when Gab played Treachery on the Skirge next turn, Jason had no further way of winning and conceded. 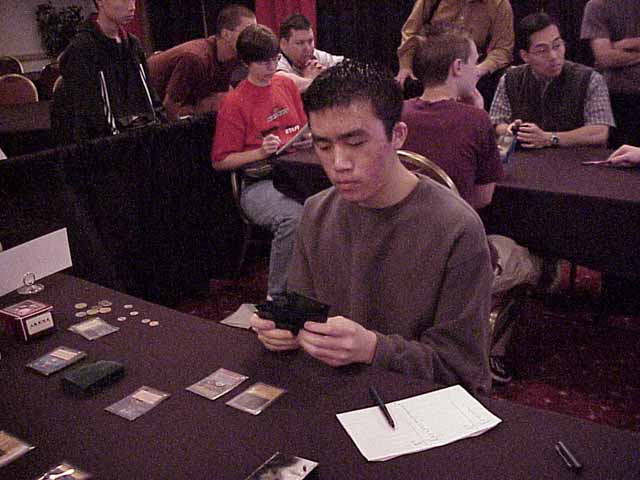 Jason opened with several depletion lands and had a Grim Monolith Annuled. Gab played several islands. Jason cast an Academy Rector, and used a Phyrexian Tower to remove it from the game, getting a Bargain. Jason drew a few cards, and attempted to cast a Tooth of Ramos but it was Miscalculated. Jason was taking his time and hoping he would draw enough discard to strip Gab of any counters. They played land for a few more turns, and then Jason drew several cards and tried to Duress Gab twice: the first was Rewound, and the second was Miscalculated and Jason chose not to pay, as he still needed mana to play a Skirge. He Unmasked Gab, taking his final spell, and played a Grim Monolith and a Rector - and said go. This visibly surprised Gab, as he expected that he would not live through that turn, but The's draw was obviously poor and did not allow him to complete the combo. Jason tried a Renounce several turns later, but it was Thwarted, and since Jason had no further way to win, he continued attacking with the Rector for several turns while Gab just played land. When Gab used Seal of Removal on the Rector and countered it, Jason conceded. 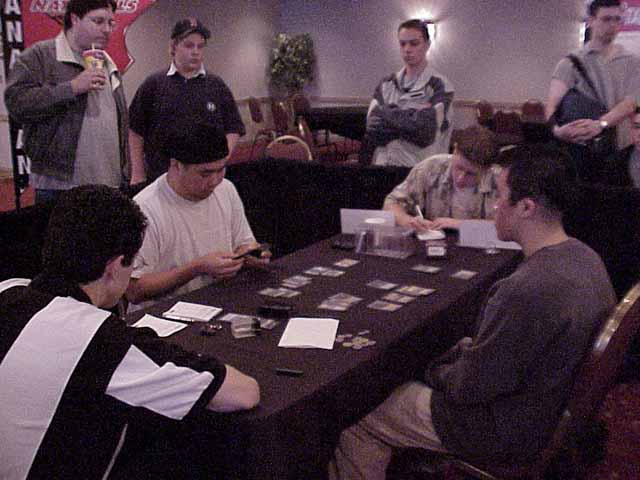 Jason played first and Gab mulliganed. Both played land for the first few turns, and Gab laid a Seal of Removal. Jason Vampiric Tutored and on his next turn played a plains. Gab played another Seal and a Monolith, and ended his turn. On Jason's turn, he Duressed Gab, taking a Thwart and leaving him with nothing but three Annuls. He then played Phyrexian Tower, then Academy Rector, and sacrificed the Rector to the Tower to get his Bargain into play. He drew fourteen cards, played three Dark Rituals, Renounced all his land to gain some life, and despite Gab's two Seals, he easily had enough mana to play Skirge twice and play multiple Soul Feasts. When he showed Gab a Yawgmoth's Will, he conceded.

Gab played first and mulliganed, while Jason had to down to five cards. Jason struggled to get land early, and that problem was further compounded by Tsang's Dust Bowl, which killed several depletion lands. Jason did eventually draw three Grim Monoliths, but the first two were countered. After the third one, Gab Stroked himself for two. Jason tried to get out a Rector, but it was countered, and the turn afterwards his Unmasks were Quashed. This left Jason in a very bad position, as he had no black mana sources, and minimal discard with which to force through a Rector or Bargain. Gab didn't have any problem winning from there.