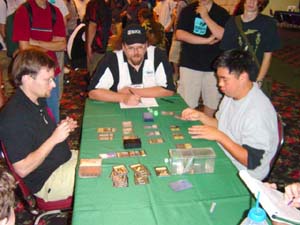 Rob Dougherty, owner and proprietor of Your Move Games, has been successful in team events, winning a Pro Tour and a Grand Prix, but has been the bridesmaid in his single matches. He has handfuls of Pro Tour Top 4s and Grand Prix Top 8s around America, including Pro Tour - Osaka and Chicago 2000, but has never actually finished up first by himself. He's looking to change that today.

On the other side of the table? Gab Tsang, also a team-based monster without a big win to his name; Gab's come in third at Team events from all the way back in Worlds 97, to top 8 team finishes at Grand Prix - Columbus and Pro Tour – New York, but has never gotten the brass ring for himself.

It's time to see who can take the prize on their own.

Rob took out his hand and before he even looked at it, he crowed, "BYOO-tee-ful hand!" Gab, sadly, could not say the same – he mulliganed a hand that was all business, except for a single forest for land that said, "CLOSED FOR HANUKKAH." He sent it back and it returned with a single island and no Careful Study or other card drawing... So he sent that back. Rob held up his hands as if to deny responsibility.

The five-card hand was as barely acceptable as five-card hands get: Two forests, Careful Study, Catalyst Stone, Roar of the Wurm. At least he had land, and the possibility of casting Roar if he could somehow yard the sucker. He opened with forest; Dougherty trumped with island, and Careful Study on top of it, putting a Mongrel and Roar into the graveyard. Gab slowed the Wurm onslaught with his Catalyst Stone, but Rob made a Werebear.

Gab stepped on any possibility of Wurms in the future with a second Catalyst Stone, but failed to draw any islands. Rob added a Mongrel keep his Werebear company, then sent it into the fray.

Gab then drew a Quiet Speculation, which would have real synergy with the two Catalyst Stones... If only he could find an island to cast it with. Rob decided, as he had in past matches, to Speculate for three now-uncastable Roars to increase his chances of drawing business cards... Oh yeah, and to gain threshold so he could attack for six damage with Werebear and Mongrel. Gab squashed that possibility by stuffing the Roars back into Rob's library with a Reclamation, reducing the Werebear to a more manageable 1/1. Rob discarded Walla to the Hound to make up for it, though, doing four points total.

Gab then drew and laid a Mongrel, ditched the Roar to the Mongrel, and cast Roar of the Wurm. Considering that he was landscrewed at this point, he wasn't doing too badly... Rob evidently concurred, as he declined to attack into a Wurm's gaping maw. Gab finally drew an island the next turn, causing Rob to shout, "Wow!" as the crowd went nuts, soccer-style. Was this the turnaround point? Could Gab fight back from this?

Tsang Careful Studied to draw an Acorn Harvest and Wonder; he thought about it for a moment, ditched a forest and a Wonder, and sent in the Mongrel, leaving the Wurm at home for D. In response, Rob Cunning Wished for Reclamation, then Reclaimed the Reclaim and the Wonder in Gab's graveyard, sending a very hurt puppy crashing back to earth just in time to meet his brother on the other side of the table. Gab dropped the Harvest and cleaned out his hand to try and save his dog, but Rob dropped a Rootwalla and a Wonder to ensure that Gab's Mongrel was kibbles and bits.

Rob now had flying. He did the math, then Careful Studies to gain threshold and make sure he can attack for enough. It wasn't quite enough, but it was sufficient to put Gab on a one-turn clock; when Gab drew no Moment's Peace, he conceded.

Tsang sideboarded and shuffled like a madman, cramming an additional complete pile shuffle into less than ten seconds, beating the three-minute deadline with three seconds to spare. This earned a brief smatter of applause from Rob. 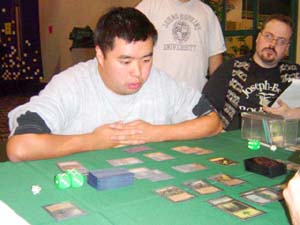 Gab looked at his hand and said confidently, "I'm gonna keep this one." Rob looked somewhat less certain, but kept as well. Gab laid the eternal first-turn Careful Study, dropping Reclamation and Roar; Rob matched that Study with his own, dropping Roar and Garden. They then spent their next turn casting their decks' poster-boy creatures: Gab cast Mongrel, while Dougherty cast Werebear.

Gab Studied again, dropping Roar and Envelop, hoping to lure Rob into a false sense of security... Or, as Rob most likely (and correctly) figured, he had an extra Envelop in his hand and could afford to throw one away. Gab then tapped out, giving Rob a one-turn opportunity to cast a sorcery – but it wasn't going to be that Roar, since Gab cast a Catalyst Stone.

Rob hissed air through his teeth, then Speculated for the triple-Roar team again to get that out of the way.

The four Roars in the yard also served the dual purpose of making his Werebear larger than the average bear – and he attacked for four. Gab pimp-slapped him back with Mongrel, then cast his own cut-rate Wurm token; Rob tried to summon a bunch of chump blockers for said token with Grizzly Fate – but say, remember that Envelop we discussed earlier? Rob did. Gab then counterattacked for eight, and Speculated for Roar, a Moment's Peace, and a Deep Analysis.

Rob created two Mongrels with the help of a friendly neighborhood Werebear, thus avoiding his painful Centaur Garden in an attempt to preserve his dipping life totals... But Gab ditched Wonder, and Rob couldn't match it. Wurms brought Dougherty down, hard.

Rob played first, and kept; Gab had a two-land hand that could work, but he couldn't chance it. He shipped it back, and spent his first turn doing the old Careful Study shuffle, flicking a Wonder and a Moment's Peace into the graveyard. Dougherty, who went first, didn't have anything as cool as that for his play; he had to settle for the ever-popular second-turn Mongrel.

Gab continued the graveyard momentum by Quiet Speculating for two Wurms and a Deep Analysis; Rob sent the Mongrel in, then robbed Tsang of flying and card drawing by Krosan Reclaiming his Wonder and his Deep Analysis, then attacked again for three the next turn, dropping Roar and immediately casting it.

Gab Speculated for another Moment's Peace, another Roar, and the Deep Analysis that Rob had put back in there a moment before – and he was in an interesting position. His graveyard was fully stocked with all sorts of meat – Analysis, Wurms, Peaces – but he had nothing on the board yet, opposition from Dougherty's Mongrel, and a Wonder stranded in his hand with no way to discard it and (with only three mana on the table) not enough mana to cast it.

Dougherty Mental Noted a Centaur Garden and a Careful Study into his graveyard, wishing he had the kind of threshold that Gab Tsang had. But he didn't. So instead, he attacked again, bringing Gab down to thirteen.

And Gab finally got the land! He cast Roar triumphantly, putting that large 6/6 bad boy on the table! Dougherty Careful Studied for about two minutes, trying to figure out what to discard, settling on forest and Envelop. He Mental Noted again, and this time he struck paydirt whilst digging through his library – a Roar and a Grizzly Fate. After all of this exhausting search, he didn't quite have the energy left to cast either spell, so he passed.

Gab attacked with the Wurm,wumping past the Mongrel, and then added another annelid to his army; now he had not one, but two Wonders stranded in his hand, with no way to discard either. Searching for chump blockers to feed to a Wurm, Dougherty hard-cast a Grizzly Fate from his hand, neatly bypassing the one in his graveyard and throwing four 2/2 tokens out there.

Gab flashed back Deep Analysis and drew... Mongrel. He can discard the Wonder now and fly in for the win!

If he attacked with his Wurm tokens, there are two cards that can kill him: Moment's Peace and Wonder. Rob discarding Wonder to his Mongrel would cause a gigantic trainwreck down below, with some Bears soaking up some lovely Wurm damage, and then Rob could swing in for the kill the next turn. Moment's Peace would accomplish the same thing, but Rob was tapped out.

Gab had a Reclamation in his graveyard, but not the mana to cast it.

The tension in the air was so palpable that you could give it a massage. Gab passed.

Rob cast Roar and did not attack, indicating that he probably did not have Wonder – otherwise he might go for the throat. On the other hand, Gab did have two Moment's Peaces in his graveyard, and perhaps Rob is afraid of that.

It's shell game time. Who has business, and who's just faking?

Rob now had two mana open: There were a few possibilities: 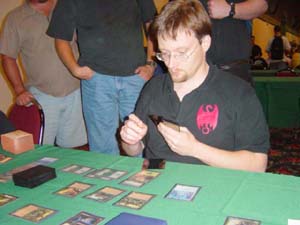 The truth is that Gab was also playing a shell game; he had tapped his only Forest, hoping to try and convince Rob that he had no other forests; he wanted Rob to cast Moment's Peace, because then Gab could match it and trump it with his two Peaces.

Confused? Hey, welcome to the world of professional Magic.

Gab decided to see how seriously Dougherty was attached to bluffing; he Reclaimed the Grizzly Fate and Roar in Dougherty's graveyard, seeing if Dougherty would use his Reclamation in response and use up that precious two mana he had showing. Dougherty did not.

It was risk time. Tsang decided that if Rob did have the Wonder, he would have used it by now. He risked it all on an attack for everything... And Rob had nothing. It was a bluff. Game goes to Tsang.