Nassif played first with a third turn morph, fourth turn channeler, which were met by a morph and a Riptide Biologist on his opponent's side. The Biologist is pretty good against decks packing green, which was proven when Nassif had to turn his morph face up: it was an Undorak. Things looked better for Jensen when he played Keeneye Aven and revealed the morph to be Mistform Seaswift. He also found his 3rd color, red, and played a skill on his Biologist. 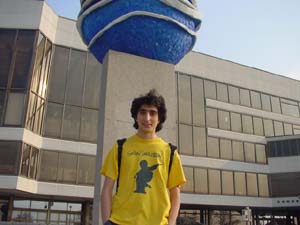 Meanwhile Nassif was developing his board position as well, with riders, Flamewave Invoker, and a Caller of the Claw, after Jensen shot the Channeler, so that he couldn't activate the Goblin Mutant, creating a bear token. The race went through the air for the Dane, while the Frenchman charged on the ground. With a permanent blocker and creature remover, the Biologist, the race was in favor of Jensen. It ended with Jensen on a short 3 life.

Nassif had the first play in the second game with a turn 3 morph, while Jensen was building up his air force with dreamer. A second morph by Nassif was met by a good defense and possible Skill target, Mistform Wall. The first morph turned out to be a Slateback, and the second one died to a charmed blocking wall. Nassif side consisted only of Slateback and he burned Jensen's next play, a morph with an Erratic Explosion. As he went to the combat phase, his beast got tapped with Tethers.

A morph Biologist and a Skill on the wall solidified Jensen's position, but Nassif had solid answers: Fever Charm and Krosan Tusker. Both of Gabriel's beasts went in, Slateback got blocked by Mistform Wall while Tusker went to the dome. Both players had cards to save their creatures, but David was on defense, as he was still facing the two beasts. That brutal power was too much for Jensen and he conceded when he saw his next draw. 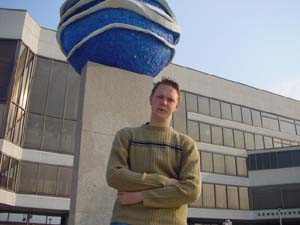 Game 3 started with a grin on Nassif's face, as Jensen had to take a mulligan: he'd not be the only one to Paris. Both players kept their hand of six. Nassif had a very strong second turn play: Lightning Rift, while Jensen put a morph into play the next turn. Both stalled on land , Jensen managed 3, while Nassif only 2. The Frenchman did however have a Herald on defense, who fetched another Herald and later cycled a Disciple of Grace, without mana to kill a morph, to get to his third land. He found it. His Rift caught a Vitality Charm and killed a morph, after cycling a Swat and a Krosan Tusker. Jensen was able to play two more morphs and a dreamer, but still missed his third color.

The Dane's early morph rush was somewhat stopped with the second Herald and a morph on Gabriel's side, because of the fear of a Caller of the Claw, that could create a large amount of tokens. Jensen army of fliers became stronger with the Clone of a Dreamer, putting Nassif on a minimum 2 turn clock, 1 if one of the morphs turned out to be another evasion creature or if he has any falter-type effect. Time for a long thought, which was troublesome for the Dane, as he had to go to the bathroom.

After deliberating for about 20 minutes, Nassif decided to put Jensen on 12 and made a morph. Jensen had a Choking Tethers and brought the game to a swift end.