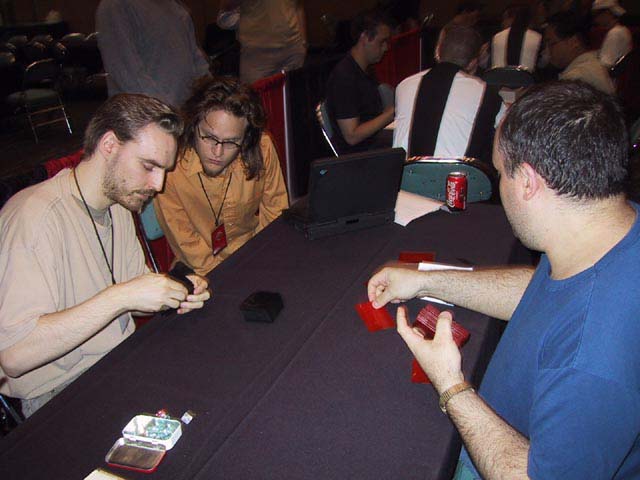 "The first PTQ I ever played in, I lost to some guy in the Top 8 named Ben."

"You have a very creative sideboard - it was very fun to test against."

The matchup between these two players is perhaps the most interesting of the quarterfinals. Gary Wise has never had a shot at the Canadian National Team, this being his first time in the Top 8 of this event. Gary isn't playing his best deck for the tournament, trying to save all of his tech for Worlds. The Team Pro-Tour Champion is certainly the favored player, if one only looks at player pedigree - the untested Ben Raymond has a lot of threats against his Counter-Rebel opponent, not the least of which is Crypt Angel. Ben Raymond's deck is almost certainly the talk of top 8. His rogue deck "Digger", which he designed and which took him to a 3rd place finish in the Standard Portion of the tournament is one of the most unusual decks to see play in a Nationals Top 8 this year. The deck, based on Gravedigger recursion, discard, and Cavern Harpy is certain to prompt a lot of interest from playtesters for Worlds.

Ben's opening hand wasn't too good, and neither were his subsequent hands. He was forced to triple-mulligan against Gary Wise's mostly solid Counter-Rebel hand. This most likely spelled doom for Ben in the first game, especially after Wise dropped a pair of Meddling Mage (naming Ravenous Rat and Recoil) to stop Ben from being able to easily recover.

On the fourth turn, Gary dropped a third Meddling Mage (stopping future Vodalian Zombies), while Ben still only had two land in play. After revealing his hand, showing a Counterspell and Absorb, Gary prompted a quick concession from Ben.

Ben added in Misinformation, Tsabo's Decree, and Juntu Stakes. Gary had anticipated this sideboard, and brought in Disrupt, Unnatural Selection, and Global Ruin.

This game wasn't nearly as one-sided. Ben dropped an early Ravenous Rat (nibbling away a Defiant Vanguard), and Gary pulled out a Ramosian Lieutenant to make up the lost card advantage. Going for beatdown, Ben dropped an Urborg Emisarry without kicker to start some kind of offense, while Gary added a Meddling Mage (stopping Recoil) to keep some control of the board.

With a Recoil in hand, Ben had less options, attacking with his Emisarry to get in some more beats. Soon, Lin Sivvi joined the battle, and the Lieutenant threw himself in the way of the Emisarry. A counterspell war over Gravedigger left Gary tapped out and without anything to search for, as well as returning the Emisarry to Ben's hand. Bringing the Emissary back down to the table, Gary searched for a Ramosian Sky Marshall in response, while Lin Sivvi popped back to Gary's hand.

Soon, Sky Marshall raced against against Emissary, with Ben in a slight lead in the race. Things would begin to go badly, however. Despite stopping an Unnatural Selection, Lin Sivvi was making the race a little difficult. After failing to get the Emissary into play, Ben died to Gary's fliers on the next turn.

Ben's hand for the third game was incredibly good, including numerous Urborg Emissaries, a Counterspell and abundant land. Gary, on the other hand, took a risk with his opening hand, keeping a one land hand, but drawing into his second land, and dropping a Meddling Mage which Ben countered. 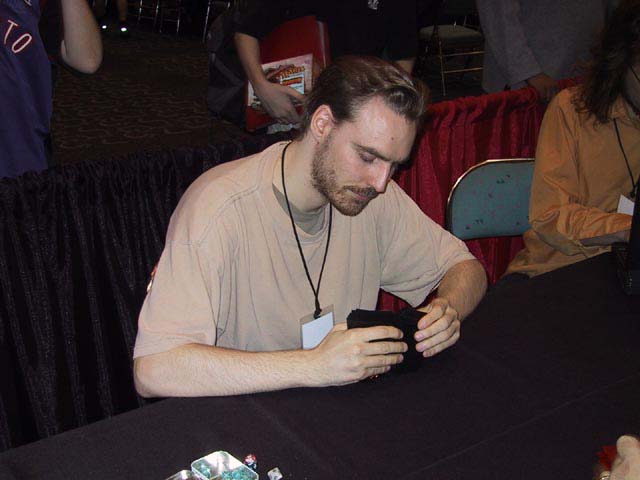 Gary dropped yet another land, but a pair of Emissaries plopped out of Ben's hand, and though Gary countered the second one, the beats were coming on quickly. Absorb's kept him at high life, but Ben kept the pressure up, pulling a counter out of Gary's hand with a Crypt Angel.

Gary finally dropped his first creature, a Ramosian Sergeant, while the beats kept coming from Ben. A Cavern Harpy was also stopped by Gary, but it left him without the mana to use the Sergeant. Recoil pulled the Sergeant off the table and a Cavern Harpy plopped the Emisarry back to Ben's hand, and in response Gary brought a Defiant Falcon into play allowing Ben to bounce it. A Meddling Mage sat home stopping Tsabo's Decree, but things still looked bleak.

Trying to mount some kind of defense, Gary recast the Defiant Falcon. Sending in with both creatures again, Ben lost his Emissary and popped the Cavern Harpy back to his hand, leaving a newly summoned Falcon and Mage back for Gary. Tapped out, Gary was unable to stop a Crypt Angel (bringing back another Cavern Harpy to Ben's hand. After attacking Gary sat at 1 life, bringing out a Rebel Informer at the end of the turn. After Ben's Recoil took it off the table, Gary conceeded.

Gary expressed some frustration after realizing that he searched before the Emissary had targetted anything. "I'll take the gift," responded Ben.

Gary started the first game off with a few quick land and a Meddling Mage against Recoil. Ben's opening Ravenous Rats took out a land, but Gary had more than a few more land to play. With the Rat's marching in, Ben continued with a Cavern Harpy to keep the card advantage coming. The Rat's second appearance nibbled away a Rebel Informer, while Gary sat back with countermagic for the continuing threats. Juntu Stakes hit the table to be disenchanted, and Gary continued the race with his Mage.

Dropping a pair of Unnatural Selection (the first was countered), Gary was left tapped out, and Cavern Harpy bounced the Rat back up again to take out an Absorb. Playing the trick again on the next turn, Gary was left without a card in hand, while a Tsabo's Decree and Ravenous Rat sat waiting in Ben's hand. The Rat took out a Disenchant next, and the Harpy/Rat recusion continued, leaving Gary effectively in Rat-lock. Dropping another life, he brought the Harpy back for the defense to keep Gary from attacking.

From the top of his deck, Gary dropped a Defiant Falcon, but Ben still held onto the Tsabo's Decree. Clearing the way with the Decree, the Harpy came over to bring Gary to 1 life. Dropping a pair of Ravenous Rats, Gary conceded.

In the final game, it is Gary's turn to mulligan, keeping a slow draw that included Unnatural Selection and Lin Sivvi. With Ben untapped with two Islands, Gary milked a counter out of Ben with a Ramosian Sargeant, putting his Lin Sivvi into play after Ben's new Emissary began the beatdown. Recoiling the Lin Sivvi on his own turn to keep Gary off of the Rebel chain, he bought himself another turn, and followed up the next turn with a Ravenous Rat to clear Gary's hand. 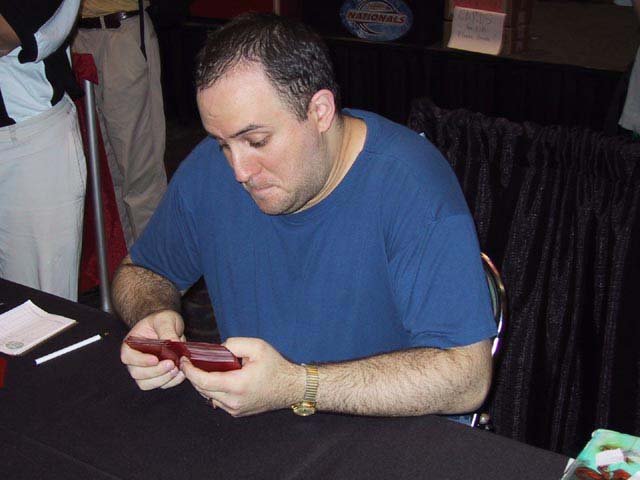 Gary's hand may have been empty, but he did still have Lin Sivvi. Lin Sivvi, however, was soon facing off with a Crypt Angel as well. Gary did still have Unnatural Selection in play, and Rebel Informer soon started taking out creatures starting with the Crypt Angel, and following up with Emissary. Gary was at low life, however, and plenty of threats remained in Ben's deck.

Gary began pulling the Rebel chain out, but saved mana to bluff countermagic against a potential Tsabo's Decree. After drawing an Absorb, he used Lin Sivvi even more conservatively, but still accumulating a beadown. With numerous Ravenous Rats in his hand, Ben held onto them, to avoid their death from "Legendary Rat Syndrome" with the Unnatural Selection.

Losing life fast, Ben Recoiled the Unnatural Selection, trying to draw countermagic from Gary's hand or make his Ravenous Rats in hand more useful. He pulled an Absorb, which he Misdirected. Gary changed his Rebels into an assortment of different creature types, including "Felix", "Kai", "Ronaldson", and others.

Things were grim for Ben now.

Making Ben's Foil Ravenous Rat a Legend, Gary made short work of the other Rats. With only the lone Legendary Ravnous Rat on the defense, he was too low to survive, even with the Tsabo's Decree.