Quarterfinals: Getting a Leg Up

These two players represent opposite ends of the Pro experience. Katsuhiro Mori is a former World Champion, in his third consecutive Worlds Sunday, and Uri Peleg is the mainstay of team Israel, in a breakout singles performance. They’re also piloting decks that live in different places along the black-green axis. Mori’s deck is more aggressive, but Peleg’s blossoms in the late game.

The two traded blows early, Peleg’s 3/4 Tarmogoyf (thanks to the Nameless Inversion that took out his Birds of Paradise) versus a Troll Ascetic from Mori. Mori added Masked Admirers, but Peleg had an Inversion of his own. Then he tapped four and played Garruk “Buy One, Get Two Free” Wildspeaker, making a beast right away. 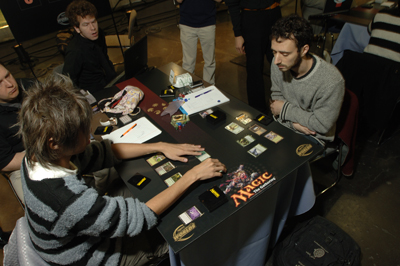 Katsuhiro Mori of Japan is playing in his third consecutive World Championships, while Uri Peleg of Israel is playing in his first. Mori untapped and played Civic Wayfinder, getting back his Admirers, trying to keep up with Peleg’s advantage, but spending six mana for a 3/2 hardly matched paying nothing for a 3/3. Peleg further pressed his advantage with a second planeswalker, Liliana Vess, and tutored Profane Command to the top of his deck. Peleg attacked with one of his Beasts and Mori traded his Troll for it, still firmly on the back foot. Not even the swing from Profane Command to kill a beast and get back his Troll could keep up with Peleg’s machine. His last hope was doubling up on the Tarmogoyf and hoping Peleg forgot he had Horizon Canopy, but Peleg saw right through it.

I got a glimpse at the sideboard choices.

Mori got off the blocks fast with two Wren’s Run Vanquishers, while Peleg Thoughtseized away Profane Command and played out Tarmogoyf and Ohran Viper. Mori swung in with both Vanquishers, trading one for the Viper, then played out Masked Admirers. Peleg had Shriekmaw for the other Vanquisher, and then threw it in front of the Admirers.

Mori replaced them with Garruk Wildspeaker and one of his Beasts. Peleg’s Tarmogoyf hit, and the Beast took a tumble. Mori replaced it and regrew his Admirers with a Llanowar Elves. Shriekmaw took out the Beast, but still Peleg couldn’t risk leaving himself open to Mori’s two Treetop Villages. His life stood at just 7.

Mori poured on more pressure, Admirers, Troll Ascetic, and another Beast, but Peleg had a second Shriekmaw. He decided it was finally time to turn up the pressure. He swung in for 6 with his Shriekmaws, holding back ‘goyf, three elves, Birds of Paradise, and his Treetop Village. Mori charged the Red Zone with Boreal Druid, two Treetops, Troll Ascetic, and Masked Admirers.

Uri went into the tank. He animated his own Treetop and got the okay to move to blockers. Two Elves teamed up on the Admirers, another chumped the Ascetic, Tarmogoyf ate a Treetop, and his own Treetop took down Boreal Druid. Peleg took 3 damage, down to 4.

His Shriekmaws took Mori down to 8. Mori played out Imperious Perfect, regrew the Admirers, and played them, hoping Peleg wouldn’t take the game right there. He could not, but still put Mori within striking distance with one ‘Maw, leaving himself adequate defenses against Mori’s squad. Mori checked the top card of his deck, then scooped up his cards.

Before shuffling up for Game 3, Mori tweaked his deck, swapping the Loxodon Warhammer back in for Viridian Shaman.

Both players turned in their opening hands, but there was a significant discrepancy in the power levels of their replacements. Mori had a second-turn Wren’s Run Vanquisher, then a tapped Treetop Village and nothing to do.

Peleg, by contrast, had the following opening:

Turn one: Birds of Paradise

Uri Peleg wins 3-0 and advances to the Semifinals, where he’ll have to beat Kotaro Otsuka’s Mannequin shenanigans.