Quarterfinals: In the Glare of the Lights

One of three Americans in the Top 8 of Pro Tour–San Juan, Noah Swartz had gotten there largely on the back of his Block Constructed deck built by Hall of Famer Zvi Mowshowitz. His record in the Draft portion of the first two days of play was a dismal 2-4, and with the Limited format being the field of battle for the Top 8, his chances were not initially looked upon highly. But he had managed to craft a plan and executed it well in the draft, pulling together White-Blue Levelers and arguably the strongest deck at the table. Jeremy Neeman of Australia is trying to accomplish something none of his countryman have managed to do since Tom Chanpheng in the mid 90s: win a Pro Tour. Could he hold off Noah's powerful deck, or would Australia be left still looking for its second Pro Tour champion?

Caravan Escort led the game off for Noah Swartz, who had been awarded the right to play first by winning the opening die roll. The 1/1 became a 2/2 on the second turn and poked Neeman to 18. Brimstone Mage for Jeremy was the reply, but rather then level up his pinger Neeman cast Battle-Rattle Shaman and began attacking, the Goblin pumping the Mage to 4/2 during combat. 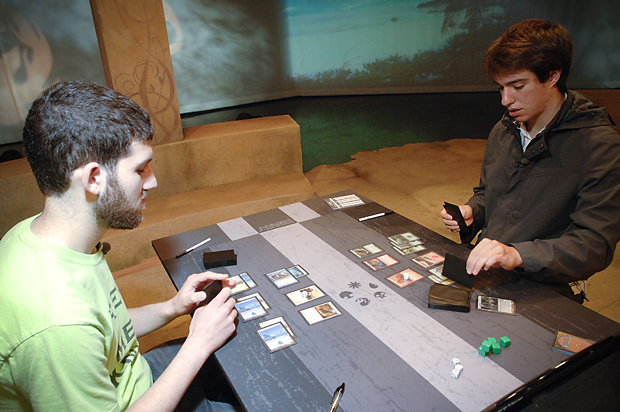 Noah didn't seem concerned about the powerful Mage, instead continuing to level up his Escort. On the third level, the white creature allowed Noah's Champion Drake to become a monstrous 4/4 from the moment he cast it. That put it out of range of pings from a leveled Brimstone Mage and dramatically increased the speed of Noah's clock. But Jeremy was able to speed up his clock as well, attacking with Battle-Rattle pumping itself to drop Swartz to 12, then casting a postcombat Stomper Cub. The 5/3 trampler was definitely a powerful threat, and with the life totals at 14-12, Jeremy had managed to take the lead for the first time in the game.

That lead didn't last long as Champion's Drake rumbled in to drop Jeremy to 10 and the Caravan Escort became a 5/5 first striker; Stomper Cub was big, but it wasn't that big. The Australian leveled up his Brimstone Mage but couldn't get an attack in and was forced to pass to Noah. The American untapped and then thought about how he might attack. He readied to send both of his creatures to the red zone, then hesitated and sat back. Totem-Guide Hartebeest came down pre-combat, fetching up a Hyena Umbra and enchanting the Drake. The now 5/5 flyer punched in for half of Jeremy's life total, and the Australian used Brimstone Mage to ding Noah for 1 before untapping.

It was his last turn of the game if Neeman didn't have a play to deal with the Drake, and with an Umbra to go through in addition to 5 toughness, that looked like a tall order for the red, green, and blue mage. If he had Regress or some other type of bounce he could do it, or perhaps a Heat Ray that would take care of the Umbra and net him a turn. He leveled up his Brimstone Mage and passed with Mountain, Forest, and Island up. When Noah declared an attack the following turn, Jeremy quickly scooped up his cards; his pass had been but a bluff.

The two players shuffled silently in between games. With both being relative unknowns coming into the weekend, they both bore the burden of trying to best some of the heavy hitters in the Top 8.

Both players opened the second game off on a mulligan, but were content with six cards. Despite going second, Swartz had the first creature by way of a Hada Sky Patrol. Jeremy matched it with Aura Gnarlid, then enchanted the 2/2 with Snake Umbra a turn later. Noah leveled up his Spy Patrol, then a turn later cast Time of Heroes and all of a sudden both players had fatties working the tables. A Guard Duty on Aura Gnarlid allowed Swartz to trump, however, and Jeremy was left with a massive blocker. Unfortunately for him, his opponent's fatty specifically couldn't be blocked thanks to its level counter.

Restarting his offense, Neeman cast a Stomper Cub. His opponent answered with an attack and Frostwind Invoker, bringing the scores to 14-10 in Noah's favor. Beastbreaker of Bala Ged for Jeremy was leveled once to become a 4/4 while his Stomper Cub traded with Swartz's Invoker. With Jeremy tapped out, Noah was free to level his Spy Patrol into a 5/5 with shroud (thanks to Time of Heroes). He chopped half of Jeremy's remaining life total and gave the Aussie one more turn to find an answer while on a comfortable 14 himself. Jeremy looked at the top card but didn't have a solution, and the two were on to a third game.

His back up against a wall in his first Pro Tour Top 8, Jeremy Neeman was all business as he shuffled for the third game. Under his breath he mumbled some words of encouragement to himself, a single loss away from elimination.

A second-turn Beastbreaker of Bala Ged and a third turn level activation for the creature put Jeremy Neeman in commanding position for the third game, keeping his tournament hopes alive. He even cast Sporecap Spider on defense while Noah spent his first three turns doing nothing beyond playing lands. At four mana the American had Makindi Griffin, but even at 2/4 the powerful flyer wasn't going to be enough to stop the Beastbreaker. 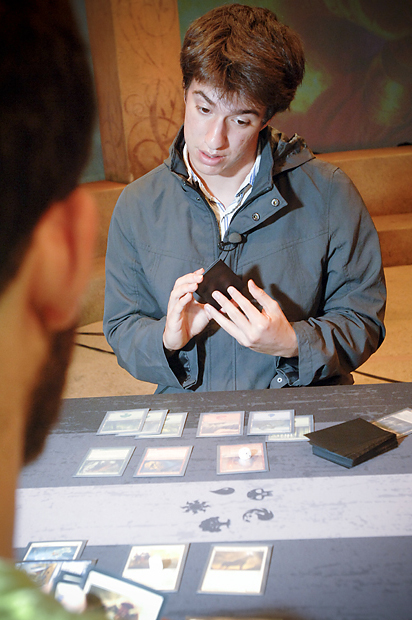 Boar Umbra on the Spider made it a formidable attacker as well, and both of Jeremy's creatures charged to the red zone. Noah opted not to block and fell to 4. He cast Kabira Vindicator to help on blocking duties, but Jeremy still had multiple fatties charging to the red zone. When Neeman attacked with the Spider and Beastbreaker, Swartz blocked each then used Smite to take out the leveler. After combat Jeremy cast Aura Gnarlid to support his Boar Umbra'd Sporecap Spider against Noah's remaining creature, the Kabira Vindicator.

Coralhelm Commander hit for Noah and was pumped to 4/4; he had enough creatures to block and survive a turn, even trading for the Aura Gnarlid. His opponent, however, had different plans. He cast a precombat Battle-Rattle Shaman, then pumped his Aura Gnarlid with its triggered ability. That meant the green creature was too big for any of Swartz's monsters to block, and his tiny life total of 4 wasn't enough to survive the beat. Neeman was still alive, and headed for a fourth game.

With other matches finishing behind them, the cameras pressed in on Noah and Jeremy to cover what was still a potential last game for the Australian. If the added scrutiny bothered them, neither gave any indication.

After his first loss of the day, Noah Swartz got to start on the play for the fourth game. He spent his second turn casting Champion's Drake only to see his opponent out-match it with a second-turn Beastbreaker of Bala Ged. Survival Cache came down for Noah after an attack, putting him up 2 life and drawing a card. He got to do the same the following turn on rebound, despite taking a 4-point attack from the Beastbreaker after Jeremy spent his third turn leveling it.

Dawnglare Invoker was Noah's creature for the fourth turn, and when Jeremy attacked with his Beastbreaker, Noah surprisingly pushed the 2/1 in the way to block. He quickly revealed why, however, tapping a white mana for Smite and sending the fatty to the graveyard. Postcombat, Jeremy cast Aura Gnarlid, then enchanted it with Spider Umbra. The Aura gave the Gnarlid reach, which would allow the Australian to block his opponent's flying creatures. 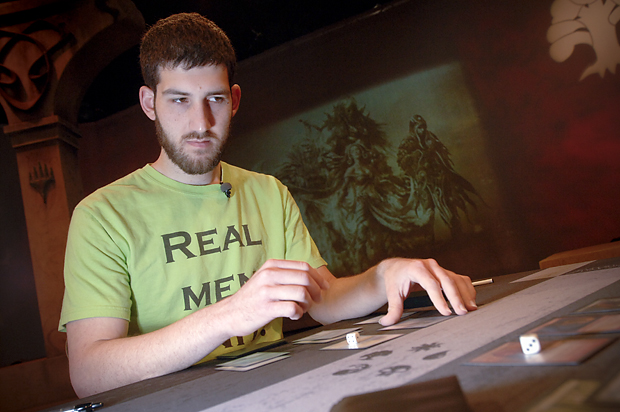 Swartz cast Hyena Umbra on his Invoker and nearly attacked before realizing his opponent had a creature with reach. Instead he cast Guard Duty on the Gnarlid, then Halimar Wavewatch which he leveled twice. Neeman kept the reach creatures coming, dropping Sporecap Spider to the table, and Noah clearly wasn't happy to see the powerful blocker.

"Man, these cameras ...." Swartz grumbled quietly, clearly frazzled as the game dragged on.

The Wavewatch made it all the way to 6/6, unblockable thanks to the Island Jeremy had on the table, and Noah found himself a key land: his eighth. That meant his Invoker was live and he could tap his opponent's creatures down in order to allow him to start attacking. With the tapper wearing an Umbra, Jeremy had a lot of work to do to remove the thing from the battlefield, but not a lot of time to do so. If his opponent attacked all out, he could get in for a whopping 13 damage. At 18 already, that meant two attacks would be sufficient to end Neeman's run.

Noah attacked, and Vendetta came down on the Dawnglare Invoker to kill the Umbra, but Jeremy fell to 5 when all was said and done. Did he have a second removal spell? He untapped, drew, and declared an attack. When Swartz tapped all of his creatures, Jeremy politely smiled and extended his hand in defeat.