This match-up is a classic that will determine which of these two players will have the right to continue fighting for a berth on the U.S. Nationals team. While you have almost certainly not heard of either of these players there is a long standing tradition of unknown players making the U.S. National team. The winner of this match will be one step closer to joining the likes of Justin Gary, Bob Maher, Eugene Harvey, and Paul Cheon as previously unknown National team members. 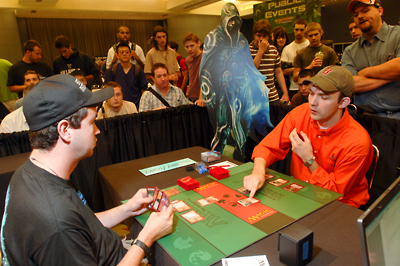 Carl Dillahay and Marsh Usary are both up and coming players, but only one of them will make the U.S. National team.

I spoke with Carl Dillahay last night about his quarterfinal match-up and he was pretty excited about bringing in his Dragon’s Claws. Both players tested the match-up extensively last night and both sides agreed that Dillahay was a favorite if he drew his Tarmogoyfs but that Usary had the ability to close ground quickly with a hasty Demigod of Revenge.

As the two players thoroughly shuffled their decks as per the judges instructions after the deck check. As they were going through their shuffling rituals the head judge came over and asked how the players planned to indicate the state of their Figure of Destinys. The players pointed to some six-sided dice and explained that they would use the pips of the dice to reflect the power/toughness of the Eventide card that made a strong showing in this Top 8.

The head judge was not satisfied with that and dispatched an underling to get D10s.

Usary shrugged, "I don’t really think it will be getting to 8 with our decks."

Dillahay kept a hand with no first turn red source for his Figure of Destiny and led off with Mutavault into Fire-Lit Thicket. You know you are in for a quick match when Usary announced "Incinerate you," at the end of the second turn cycle. A suspended Rift Bolt and Mogg Fanatic were Dillahay’s plays on turn three, while Usary had Magus of the Moon.

Dillahay had no problem with that and sent the Rift Bolt at Usary’s dome – the Magus was actually fixing his mana. He played Figure of Destiny and pumped it to a 2/2. He also suspended his second Rift Bolt. Usary played Lash Out to take out the Kithkin on upkeep but missed on the clash and played Mogg Fanatic. The life totals were 12 to 13 in favor of Usary who lost his Magus of the Moon in a fight with the always pesky Mogg Fanatic.

"How many cards do you have?" asked Usary who was now at 9 and looking at three cards in Dillahay’s grip. "That’s a lot of cards." He hoped for the best and aimed Incinerate and Shock and Shock at the Syracuse player but passed the turn laying a Ghitu Encampment and making no play.

Incinerate, Incinerate, and Shard Volley from Dillahay closed out the game.

While the two players shuffled through their sideboards Dillahay wondered how close he came to the edge. "If that Ghitu Encampment didn’t come into play tapped would it have been Demigod?"

Usary was hesitant to give away any information and just shrugged, "Mmmmm... it is hard to say."

"Will you tell me after the match?"

Usary nodded in agreement while finalizing his sideboard swaps. He took out his Magi and Shocks in favor of Sulfur Elementals and Dead // Gone. I did not get a chance to see Dillahay’s swaps but based in the enthusiasm he expressed about them last night I was certain his Dragon’s Claws went right in.

Dillahay sighed deeply as he had to send two straight hands back in search of something manageable.

"All land," answered Dillahay. "Which is rare for this deck, I only play 22. I think on the weekend I mulliganed maybe twice."

Usary led off with Blood Knight but there was no play from Dillahay who was sitting on a Tarfire for the Knight. Usary made another and added Figure of Destiny for good measure. 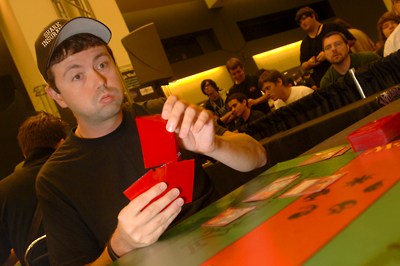 Usary’s hat says it all.Dillahay made a 3/4 Tarmogoyf and his own Gro-a-Kithkin. Usary smoked the Goyf with Flame Javelin and got in for two with Blood Knight. Dillahay came back across with a 2/2 Figure and Mutavault.

A 4- point counterattack from Usary left the life totals at 16 to 13 in the Team Shark Insurance player’s favor. When Dillahay tried to even things up, Dead//Gone took out Mutavault. Dillahay had to consider pumping his Figure but passed the turn instead. Dillahay fell to 9 on the next attack – both players were leery of committing mana to their Figures and when Dillahay played Flame Javelin at the end of the turn Usary thought about supersizing but passed instead. Dillahay only had one card in hand and passed the turn back.

Usary flashed out Sulfur Elemental and untapped into Demigod to even up the game score.

Dillahay had taken out four Kavu Predators and one Figure of Destiny to bring in the Dragon’s Claws and both copies of Unwilling Recruit and left the deck in that configuration for the third game.

"Touche," said Dillahay after both players opened with Mogg Fanatic. The two Fanatics collided in the red zone and the two players picked them up and pointed the extra point of damage at each other. Figure of Destiny came down for Dillahay as a 2/2 for two.

Usary played Blood Knight and watched curiously as Dillahay pumped his Figure of Destiny after the Blood Knight blocked it. Dillahay kept waiting for the Knight to go to the bin but then Usary reminded him. "Pro white."

Usary paid two mana to play a second stage Figure and also added Mogg Fanatic. Dillahay found one of his sideboarded Dragon’s Claw. Usary though for a while and finally announced, "Attack step," and sent in his Figure offering a trade that Dillahay refused. He took two and gained one back off of Incinerate – thrown at Usary -- at the end of the turn. Usary took that window to make his Figure a 4/4.

Dillahay passed and was staring into the headlights of an oncoming Demigod. The two 4/4 Figures traded and Flame Javelin took down the flier – and recouped another precious life point. He gained another when Dillahay Tarfired Blood Knight. He was out of cards but was at a hearty 23 life.

Mutavault offered to block a Sulfur Elemental that had made a sudden appearance at the end of the last turn but Usary had Lash Out revealing Flame Javelin. Dillahay revelaed Dragon’s Claw and sent it to the bottom. Usary was going to work now with a pair of active Keldon Megaliths and the Dragon’s Claw could not keep up with the race.

Two Tarfires and an Unwilling Recruit came out for three Firespout for Dillahay. There were no sideboard changes for Usary who led off with Mogg Fanatic on the draw. Dillahay played Keldon Marauders but the red zone remained untouched as Blood Knight came down on Usary’s side of the board.

Maruaders went away and Dillahay sat back on four lands and a fistful of cards but when Usary attacked with Blood Knight he only activated Mutavualt and put it in the way of Magg Fanatic. Figure of Destiny joined Usary’s team.

Dillahay cleared the modest army with Firespout. Usary shrugged, heaved a Flame Javelin at his opponent, and untapped to send in his Ghitu Encampment. It was 18 to 12 in Usary’s favor. Dillahay played a 4/5 Tarmogoyf and suspended Rift Bolt.

Blood Knight drew the fire from the Rift Bolt and Dillahay got in for four. He fortified his army with a second Tarmogoyf but he was falling to a dangerous life total as Usary Incinerated him EOT down to 9 while Usary was still at 14. That quickly changed when two Tarmogoyfs barreled into the red zone and Dillahay played Dragon’s Claw. In response to the Claw, Usary flung a Javelin and dropped Dillahay to five. He played an otherwise lethal Demigod but could not attack with it after Dillahay gained a life that put him just barely out of the Demigod’s reach.

The Demigod traded with one of the Goyfs but Dillahay was able to get the rest of the way there with an Incinerate.

Dillahay revealed two more Tarmogoyfs sitting in his hand at the end of the game.

"You drew all four?"

"I figured you had Flame Javelin and Demigod. That’s why I played the Dragon’s Claw." 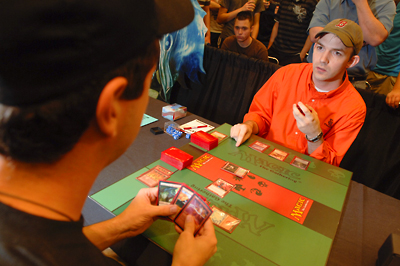 Dillahay’s diligence pays off.Usary kept a hand with plenty of action – from Figure of Destiny to Flame Javelin – but Dillahay mulliganed a land heavy hand, "There were two Tarmogoyfs on top. I should have kept it."

He looked at his next six and there was no time to even see what he pulled as it went straight back, "C’mon give me a good five. Let’s play a decent game. I know you don’t want to win like that. I wouldn’t"

Usary kicked off the deciding game with Figure of Destiny and a suspended Rift Bolt from Dillahay – who had to take a point from his Karplusan to do it – took out the Figure a turn later. In the meanwhile Usary banged in for two with his Figure and laid a Ghitu Encampment. Dillahay stalled on two lands while Usary went right to four and fired off an Incinerate at the end of the turn.

Dillahay played Tarmogoyf but Usary just ignored it and Javelined the Syracuse player down to 9. He took 3 and watched Dillahay tick down to 7 from his Karplusan as he played a second Tarmogoyf. Usary Incinerated at the end of the turn and used Dead // Gone to bounce the untapped Goyf. He attacked with a Ghitu Encampment and Dillahay was well within reach of the remaining burn in Usary’s hand.