Quarterfinals: Grinding Out a Victory

rom a reporter's perspective, this is a great quarterfinal matchup. On one side of the table is Michael Bennett, who qualified for Nationals via the final grinder, the "last last chance." Opposite him is Thomas Huteson, who earned his way here by virtue of winning a City Champs event in the first year that program was offered in America. Making Top 8 had to be great for both players; advancing would make the weekend even greater. 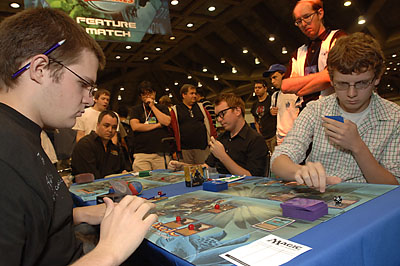 The Sunday spotlight was new for both Bennet, left, and Huteson.

Both players shuffled quietly before the game, and both kept their initial hands. Huteson dropped a Mountain and a Mogg Fanatic, with Bennett's play being a Temple Garden tapped. Huteson played Pendelhaven and used it to swing for 2 with the Fanatic, ending his turn after suspending a Greater Gargadon. Bennett played a Gemstone Mine and Wall of Roots, using the Wall immediately to drop Birds of Paradise onto the table. Huteson swung with his Fanatic, and Bennett, mindful of the burn spells in his opponent's deck, chose not to block, falling to 17. Thomas added a Tin Street Hooligan to his side, dropped a Treetop Village, and picked off Michael's Birds with his Fanatic.

Bennett used Glittering Wish to fetch Saffi and played her. Huteson thought for a moment after laying a Karplusan Forest, then swung with his Treetop Village and Hooligan, dropping Bennett to 12. On his next turn, Thomas swung with just Tin Street Hooligan, and Michael played Chord of Calling for 4 during the declare attackers step. Chord summoned Loxodon Hierarch, taking Bennett back up to 16, and the elephant jumped in front of the goblin. Huteson sacked it to his Gargadon, then passed the turn after pondering the presence of the pachyderm.

Michael pushed the Hierarch into the red zone, knocking Thomas to 16. At the end of Bennett's turn, Huteson Incinerated Saffi, who was sacrificed to preserve Loxodon Hierarch. Bennett then sacrificed the Hierarch, which returned to play because of Saffi and put Bennett back at 20. With no more Saffi tricks, though, Huteson was able to Char the elephant, falling to 14 in the process.

Undaunted, Michael dropped a Godless Shrine and used it to play Teneb, the Harvester. Thomas was equally undaunted, though, having Incinerate and Char once more, sending the dragon to the graveyard. After Bennett could only muster Birds of Paradise, Huteson bashed with the Treetop Village and summoned a Mogg Fanatic. Life totals stood at 15-12 in the favor of Bennett. Next turn, Huteson swung with the Village and Fanatic, pumping the latter with Pendelhaven to take an 11-10 lead in the life race. Bennett played his own Pendelhaven as Strip Mine and summoned an Essence Warden, which was quickly killed by the Fanatical goblin.

The time counters on Greater Gargadon were rapidly decreasing, and Thomas moved them along by sacrificing lands to put the enormous beast into play. Treetop Village joined the fresh Gargadon in the red zone, and Bennett's Birds gamely jumped in the red monster's way. Bennett was at 7, however, with a very large creature staring him down. He Castigated Huteson, but Thomas responded by Incinerating the 0/3 Wall of Roots. That earned the concession from Michael.

Just as they were before the first game, both players were quiet as they pondered their sideboard decisions. Huteson swapped five cards and Bennett changed four. After some more shuffling in silence, it was on to the second game. 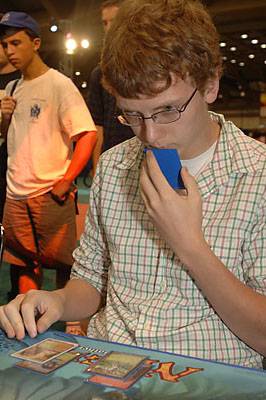 Huteson applied the beatdown in Game 1.

Both players mulliganed to six cards. Bennett had a first-turn Essence Warden, and Huteson's opening play was Treetop Village. The Essence Warden got into the red zone, and Bennett dropped a Godless Shrine tapped. Huteson laid a Karplusan Forest and went to 18 for Seal of Fire. Bennett added a Wall of Roots to his side, going to 21, and pushed the Warden into the red zone again, knocking Huteson to 17. Thomas answered by attacking with Treetop Village, putting Michael at 18. Bennett played a Temple Garden untapped and used it to summon Loxodon Hierarch, leaving him at a healthy 21 life.

Huteson went to 15 to suspend a Rift Bolt, and used a fresh Karplusan Forest to animate Treetop Village. Bennett blocked the rampaging Apes with his Wall of Roots, and Seal of Fire sent the Wall packing. Michael swung for 5, dropping Thomas to 10, and played Saffi Eriksdotter, putting himself at 22. The unsuspended Rift Bolt targeted Saffi, but Bennett used it to do the Hierarch trick from the previous game, ending up at 27. Huteson's only red sources were Karplusan Forests, so he took 2 to kill the elephant with Seal of Fire and Incinerate.

With Michael's board diminished, Thomas went on the offensive, attacking with Treetop Village. It died a grisly death to Slaughter Pact. No free wins were to be had this time, as Bennett paid for the Pact during his upkeep, and Essence Warden brought Huteson down to 6. Huteson played Tarmogoyf, but Bennett one-upped him with Teneb, the Harvester. After looking at his next card, Bennett decided to pack it in.

Neither player mulliganed, and Huteson kicked off the festivities with a Treetop Village. Bennett's only play was a tapped Temple Garden. Huteson played Tarmogoyf, but Bennett had an answer, dropping a second-turn Wall of Roots for the third straight game. Huteson laid a Skarrg, the Rage Pits, and dropped a second Tarmogoyf and a Seal of Fire. Michael went to 18 for a tapped Overgrown Tomb and played Essence Warden, followed by Saffi Eriksdotter. Thomas responded to Saffi, though, by Sealing the Warden.

On his turn, Thomas animated his Village and swung with it plus his two Tarmogoyfs. Michael blocked a Lhurgoyf with his Wall and fell to 13. A Brushland joined Bennett's group of lands and he passed the turn. Huteson tried to kill Saffi with another Seal of Fire during Bennett's end step, but Bennett convoked a Chord of Calling for 4. He found a Crypt Champion, and that was good enough for Huteson to scoop.

Huteson kept his opening hand. Bennett, on the other hand, was dissatisfied with his opening seven, and also his first mulligan, but he kept at five cards. Huteson led with Seal of Fire, and Bennett laid an untapped Overgrown Tomb and Birds of Paradise. Huteson summoned a Mogg War Marshal with a tag-along goblin token. Bennett dropped a Plains and, for the fourth game in a row, had Wall of Roots on the second turn. Thomas paid echo on his Marshal and pushed both Goblins into the red zone. Wall of Roots blocked one, leaving Michael at 17. He took 2 from a Temple Garden, but was quickly up to 19 because of Loxodon Hierarch.

Thomas played a second untapped Stomping Ground, Charring the Hierarch and going to 14. Another goblin got past the wall, putting Bennett at 18. On his turn, Bennett fetched Saffi Eriksdotter with Glittering Wish and played her. Huteson had a Pithing Needle ready for the legend, Incinerated the depleted Wall of Roots, and swung with his goblins. Saffi took care of the token; the Marshal left Bennett at 17. Saffi showed her love for combat by attacking Huteson to 12. Bennett added another Wall of Roots and passed. Thomas suspended both Greater Gargadon and Rift Bolt on his turn. Saffi attacked again, and Mogg War Marshal became Gargadon food after blocking. Michael played an Orzhov Basilica and passed, then lost his Saffi to Rift Bolt on Thomas' upkeep. 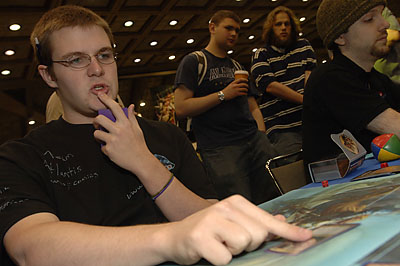 Saffi and Hierarch made for fun times for Bennett.

Bennett played Elves of Deep Shadow, then used Chord of Calling for four to put Ghost Council of Orzhova into play. This put the life totals at 18-11 in Bennett's favor. Ghost Council squashed a goblin token in combat, after which Bennett added Dark Confidant to his team. Huteson hardcast Rift Bolt, targeting Dark Confidant, but the likeness of Bob Maher quickly became a sacrifice to the Ghost Council. On the next turn, Michael attacked with the Ghost Council again.

Thomas sacrificed three lands (floating mana) to feed Greater Gargadon and put the large beast into play. Before it could damage Ghost Council, though, Michael had a Slaughter Pact waiting for it. Thomas' floating mana produced a Sulfur Elemental, and Michael used his second main phase to play another Dark Confidant.

The Confidant was not long for the world this time, either, dying to Mogg Fanatic. Bennett again denied Huteson the free win by paying for Slaughter Pact and swung with the Ghost Council. Sulfur Elemental, which was making the Orzhov lord a 5/3, blocked it. Michael's Elves of Deep Shadow paid their tribute to the Ghost Council, though, and when the legendary spirit came back into play, life totals were 20-5 in Bennett's favor.

Next turn, Bennett swung with the Ghost Council again. This time, Huteson had a Char waiting for it. Michael opted to let the Ghost Council die rather than sacrifice his Wall of Roots to it. The reason became obvious soon enough, as the Wall was used to play Chord of Calling for 6. Huteson extended the hand.

Michael Bennett defeats Thomas Huteson, 3-1. Bennett moves on to the semifinals, keeping hope alive to go all the way after qualifying via the final grinder. At the very least he's earned a spot on the National Team, a major accomplishment for all grinders to be proud of.