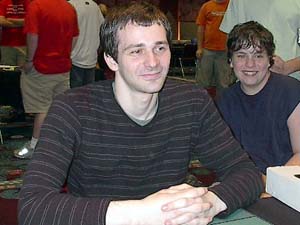 Harry Durnan is a pure amateur who decided to fly Orlando from Boston on a lark. Back in Boston he apparently works in a warehouse, which is a little unusual for a gamer, but a respectable occupation. He says he was going to go to Disney World today if he lost on Day 1, but now he finds himself sitting across from a Pro Tour champion in the single elimination rounds. Osyp is a bum. Okay, he's not really a bum, but he did just quit his job and will start attending graduate school this fall.

The deck matchup for this quarterfinal is Durnan's U/G Tooth and Nail deck that only splashes blue for Crystal Shard in the maindeck, and March of Machines out of the sideboard against Osyp's Vial Affinity deck that carries a heavy green sideboard for the mirror match. This was perhaps the shortest feature match of the day, as Durnan's deck decided to poop out on him, while Osyp served up a turn 4 and a turn 3 kill.

"Weeell, I'm going to lose the first game anyway, so I may as well mulligan this game and hope for a better hand," lamented Durnan.

"I hope I'm in for a Rude Awakening this match. I hope you just slam that card down and crush me with it," replied Osyp.

Durnan found a better set of six cards to start with, but quickly fell behind as Osyp played Aether Vial, Ravager, two Workers, and a Disciple of the Vault. "I like your odds," quipped Osyp, as Durnan passed turn 3 with no play except a third land, and Osyp killed him on turn 4, never giving his opponent a chance to cast a spell.

Despite the game 1 win, Osyp sighed when he saw Durnan siding in twelve cards. "Jesus, we didn't even get decklists and now he's siding in infinite cards against me. These next two games are going to be miserable. I like how you intimidate me with your sideboard there, Harry, you just drop the whole thing on your deck and make me deal with it. Very tricky."

Durnan again had to mulligan, this time shipping a one-land hand for a hand containing four lands and two Crystal Shards. "I need a good finish, man. PLease, please lose this game for me. I'm so close to like ten thousand dollars from the end of year payout." Osyp then pumped the fist when Durnan's turn 3 play was Crystal Shard and a tapped Cloudpost. Osyp drew his card, thought for a second, and then swung for a third turn win to accompany his turn 4 win from last game. 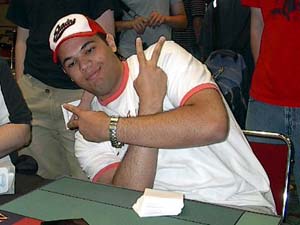 Durnan: "Well, at least I paid for this trip and qualified for my first Pro Tour. All in all, it was a good weekend, even if I expected that no one would really be playing Affinity."

Osyp: "God, I've still got cobwebs right now because I'm trying to shake off last night. My play isn't perfect right now, but I guess it's kind of hard to deal with my deck when you don't draw any artifact removal spells."