," said Antonino De Rosa, telling Shuhei Nakamura that he was indeed playing one more card than the minimum in his draft deck. "I couldn't figure out what to cut, so I had to play one more." 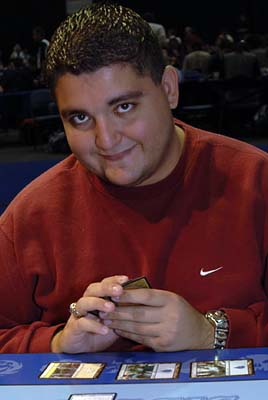 Antonino was all smiles before the match.

Nakamura took this to mean bad things for his chances of advancing out of the quarterfinals, but had he known De Rosa's deck contained no bounce lands, Signets, or mana-fixing of any kind, he might have been more confident.

De Rosa's draft went exactly how he scripted it. He picked an early Snapping Drake and some white cards in Ravnica, scooped up incredible Izzet quality in Guildpact, including 3 Steamcore Weirds and 2 Ogre Savants, and then opened Demonfire in pack 3, giving him an astounding number of playables with still 14 cards left to draft. Unfortunately, he ended up slightly glutted in the four-drop slot, and didn't snag a Signet anywhere along the way, so he was forced to run a wince-worthy 18 lands in a format where most players want to be playing 16.

Of course, with the quality of his men being the highest at the table, he still had to like his chances in any matchup, but if he didn't draw his colors, or if he flooded at the wrong time, things could get very difficult. Perhaps just as importantly, De Rosa had passed a late Riot Spikes when his pile was already overloaded with creatures, and he could use a few spells, even one somewhat situational like the Spikes.

Nakamura's deck was rife with one-toughness creatures and Ant knew he'd passed a Thundersong Trumpeter and Master of Impediments in the draft, so problematic little men were obviously out there. Then again, the format is still new, and it's possible De Rosa hadn't played with or against the Spikes much on the weekend.

Shuhei Nakamura's deck was not nearly as good as De Rosa's, but Nakamura has proven over the years that his playskills can carry him through things, even when his deck clearly looks to have the worst of a matchup. Nakamura's spells were quite solid, and Thundersong Trumpeter plus Master of Impediments could clearly cause issues for De Rosa's attack plan, but the creatures in Shuhei 's deck leave something to be desired.

De Rosa mulliganned his first hand, kept his set of six, the red lights on the television cameras flipped on, and they were off. Nakamura cast a second-turn Mourning Thrull, while De Rosa was left discarding on turn three, caught without a second land. This was not the start the big man was hoping for.

Nakamura quickly threw down two more creatures in Ostiary Thrull and Conclave Equenaut while De Rosa finally found lands two and three. Freewind Equenaut and Soulsworn Jury staved off the beats a bit, but the Selesnya Equenaut was merciless, dropping De Rosa all the way to 3 before he was able to bounce it with an Ogre Savant.

Nakamura threw the Equenaut back on the board, but not before casting a very troublesome Thundersong Trumpeter as well. Demonfire sent the Equenaut away for good, but Nakamura struck back with Master of Impediments, forcing De Rosa to chump with a Steamcore Weird.

Another Weird targeted the Master, but Fiery Conclusion made sure it flamed De Rosa's Savant on its way to the graveyard. With the score 20-3, things were still very tense. Just as De Rosa thought he might stabilize, Nakamura cast Squealing Devil. Unable to deal with the Devil's Fear and out of answers, De Rosa scooped up his cards, muttering, "I am soo bad… so bad."

"Don't beat me too fast, man," admonished Antonino. "I want to get my money's worth for being on camera for the first time here."

De Rosa cast a turn-three Silkwing Scout only to see it die immediately to a Darkblast. Train of Thought let the big man draw two cards, and then Steamcore Weird made sure Squealing Devil shuffled off to a quick end. Nakamura traded a Freewind Equenaut with Snapping Drake, and De Rosa kept the pressure on, casting Tidewater Minion and Beacon Hawk a turn later. 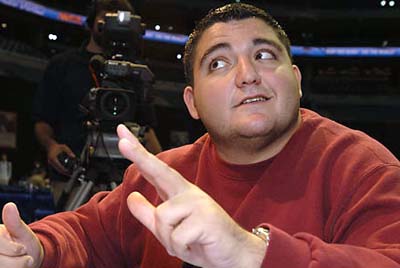 The comeback continued for De Rosa.

Sadly for the big man, Kindle the Carnage showed exactly how wicked it could be, clearing the board at the low, low cost of a discarded Petrahydrox. Wakestone Gargoyle kept the pressure on, but Shuhei was rapidly evening the life race via smashing with first one, and then a pair of Ordruun Commandos.

Sabertooth Alley Cat from Nakamura showed how scruffy his creature base really was, but it certainly seemed effective against De Rosa's deck. Vertigo Spawn looked like it might be enough to stave off the comeback, but Master of Impediments showed up just in time to keep Nakamura alive, and the Japanese master dispatched De Rosa as well, with Antonino shaking his head at the twelve land he drew.

"So far I had some good draws… not bad. Sigh." The sarcasm was now thick in the feature match area.

De Rosa cycled a Train of Thought on turn two to start the third game, his back clearly against a wall and Nakamura's mangy mongrels threatening to rip out his throat before sending Shuhei on to the semis. Benevolent Ancestor provided a damage sponge, while Snapping Drake and Steamcore Weird brought the noise. Nakamura cast a Thundersong Trumpeter to slow down De Rosa, but Antonino's freshly sideboarded Palliation Accord made sure every tap of the Boros band member would cost him a damage of his own. The board was soon clogged with creatures, and the action slowed to a crawl as each player looked for advantages. Petrahydrox was merely bait for De Rosa to tap his Tidewater Minion, thus allowing Nakamura to kill one of De Rosa's Drakes. Shuhei was clearly playing well. 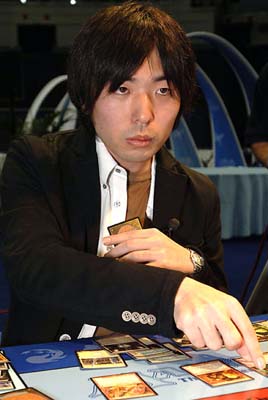 Nakamura changed around his deck after Game 3.

The game entered a new phase of complexity when Nakamura cast Gruul Guildmage, just after De Rosa bounced Master of Impediments. Now, however, De Rosa had enough creatures on the board to get through Nakamura's interference, and a few attacks later Nakamura was sitting at 7, searching for answers.

Demonfire for the remaining life a turn later made any such answers irrelevant and put Ant on the board for his Pro Tour Sunday debut.

While De Rosa was on a bathroom break, Nakamura sided into more blue and white cards, expurgating his black cards in the process.

Nakamura's craftiness became immediately apparent in Game 4 when he cast Thundersong Trumpeter followed by Vigean Graftmage and Conclave Equenaut, turning it directly into a 4/4 flier. For his part, De Rosa cast Centaur Safeguard and then Train of Thought for two, falling to 14 on Nakamura's attack.

Beacon Hawk and Halcyon Glaze gave De Rosa more permanents, but Nakamura had the Overrule for Steamcore Weird a turn later, letting him keep the pressure on. Nakamura was clearly stuck on four lands at this point, while De Rosa was having no trouble finding mana for the gas in his hand. Savant, Savant, Snapping Drake, Weird in order, and Nakamura with no second red for the Carnage in his hand meant De Rosa had quickly evened the match two games a piece.

The first spell of Game 5 was a Centaur Safeguard for De Rosa followed by Ordruun Commando for Nakamura. De Rosa cast Halcyon Glaze a turn later, giving him a nice aggro boost, should he have a series of creatures in hand. Luckily for Ant, almost his entire deck is creatures, meaning as long as he didn't have only lands in hand, the Glaze was going to beat.

Leap of Flame on Ordruun Commando a turn later sent the Glaze to the yard, and left De Rosa mildly frustrated, though he had already been able to reduce Nakamura to 9 at that point. Train of Thought drew two cards, while Nakamura simply kept laying more lands without casting any spells or creatures. His hand was either stone nothing or the ballsiest slowroll of Kindle the Carnage you will ever see. It turns out it was nothing, but Nakamura was able to stay alive via Fiery Conclusion and an Overrule on Snapping Drake. Savant, Weird, Tidespout Tyrant for Nakamura, then another Savant for De Rosa made the game into an amazing affair to watch.

It is difficult to convey just how tense the game became in the following turns, as the crowd in Sazka Arena was now completely following the match. Shuhei had snapped straight up in his chair, and De Rosa was now sweating the fact that he had been so very close and still might lose this. If he could just draw the Demonfire still left in his deck, he would win. If he could not… well, the Tyrant was clearly the sheriff on the board now, and he was laying down the law like it was his job.

Further attacks from the Tyrant minus some Palliation counters made the score 6-6, an incredible comeback from what looked to be a lost game. Another whiff on the Demonfire from De Rosa left him with nothing to do but replay men, shipping the turn to Nakamura.

Nakamura drew his card and then wiggled a bit in his seat. Nakamura cast Wee Dragonauts, bringing back an Eidolon and bouncing Palliation Accord. He then cast Petrahydrox, bouncing one of De Rosa's flying blockers, and finally cast the Eidolon, bouncing De Rosa's other blocker and swinging in for the win.

De Rosa stuck out the hand, graciously congratulating Nakamura, while quietly cursing the fact that he drew 16 lands in Game 5, leaving Nakamura just enough time for the comeback.

The worst news of all was that Demonfire was two cards down.