renchman Pierre Dagen came into this match the underdog, not necessarily because of the deck match-up, but because he was the least-recognizable name in this Top 8 field and he was playing against a very large name. Dagen has a great 61.0% win rate from over 20 Grand Prix events, and he netted a Top 8 at Grand Prix Bochum, but he was up against a monstrous pro: the Wafo-Tapa.

Guillaume Wafo-Tapa, also of France, is such a large presence he has an informal deck archetype named after him and him alone. If you're playing "the Wafo-Tapa" or "Mono-Wafo-Tapa" it's shorthand for "the most controlling deck possible in the given format." Though Wafo-Tapa had to win a PTQ to get here, his Esper Control deck, sporting only one creature, is the only undefeated constructed deck in the Top 8. Considered and concerted, Wafo-Tapa makes deliberate plays with the appropriate amount of thought at every turn. And you can bet it's the right one. This Pro Tour Top 8 makes a full hands' worth for him, and is eligible for the Hall of Fame, which makes this fifth Top 8 all the more important for him to pick up some extra votes. 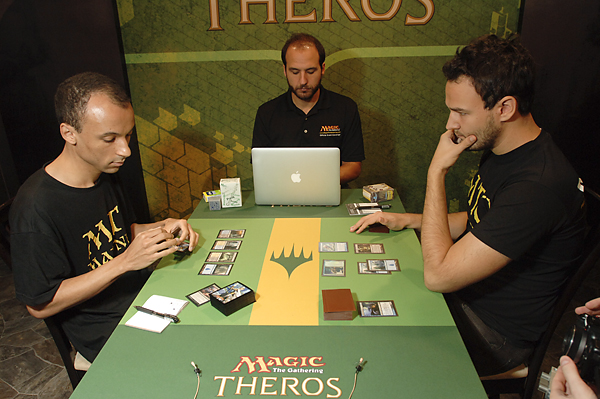 Dagen was sporting the Mono-Blue Devotion deck, and had been play-testing against Wafo-Tapa all week. He said that though the pre-board game was miserable, after the sideboard, Wafo-Tapa's game gets much harder. This was the beginning of Dagen's quest, his first time under the Pro Tour Top 8 lights, cameras, and cheers from the nearby crowds. But his first ordeal, and possibly his last, was the Wafo-Tapa.

In the first game, the pre-board underdog, Dagen, kept a strong hand that gave Wafo-Tapa pause early. Wafo-Tapa's first-turn Thoughtseize splayed a grip of powerful cards: Island, two Thassa, God of the Sea, two Nightveil Specter, and the all-important Bident of Thassa. Dagen called the Bident his "best pre-sideboard and post-sideboard" card in the matchup. Despite this, Wafo-Tapa took one of the Specters. He later said that with zero creature removal in his hand, he thought it was the right play. It is a difficult choice though, because a resolved Bident alongside literally any creature could create problems.

Throughout the match, Dagen wisely questioned every one of his spells. Rather than cast something directly to the battlefield, he silently held it over the table, hovering, implying the question "May I resolve this spell, please?" Because the answer from Wafo-Tapa was often, "No," or at least, "Well, let me do this first."

As the game wore on, and the Bident of Thassa, which resolved, became a problem. Though Dagen was only plinking away with a Judge's Familiar, unlike other Esper decks, Wafo-Tapa's featured only one main deck Detention Sphere, so there were fewer ways to remove the card-advantage machine. Dagen also had two Mutavaults available in case Wafo-Tapa cast a board sweeper. 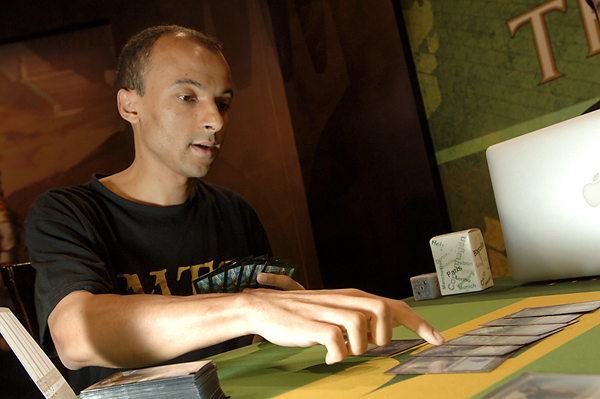 Wafo-Tapa fights to take a first game, knowing how hard the match may get once sideboarding takes place.

The resolved artifact allowed Dagen to keep pressure on Wafo-Tapa throughout the entirety of the match.

Dagen made his most decisive turn on turn six. He Knew Supreme Verdict was incoming, but he cast a Cloudfin Raptor anyway, so the Thassa would turn on. Once that resolved, Dagen thought he was in the clear, and resolved a Jace, Architect of Thought into six untapped lands from Wafo-Tapa. With both of Dagen's most important cards on the table, the Bident and the Jace, Guillaume would have to find his answers quickly. That end-of-turn Wafo-Tapa brought himself back up to 10 life and drew two cards of Sphinx's Revelation, but he appeared very behind.

The next turn Dagen made his move. Supreme Verdict be damned, he cast both a Frostburn Weird and an Omenspeaker pre-combat to pump up his Cloudfin Raptor, and moved in with his avail creatures, including a Mutavault. Wafo-Tapa finally acted, taking out the Thassa with Azorius Charm and Mutavault with a Hero's Downfall, though he still fell to 7 life.

Dagen played his aggressive role seriously. He knew his best chance was to keep posing questions requiring specific answers. And with the Bident and the Planeswalker keeping Dagen up on cards, he wasn't planning to stop with the interrogation anytime soon. 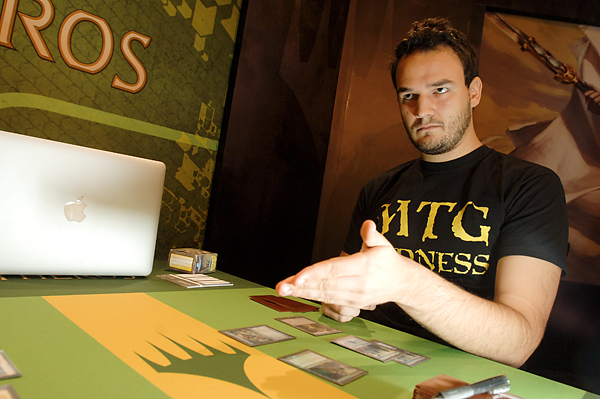 Dagen pushes his advantages, with his Mono-Blue Devotion deck containing a variety of difficult threats.

And it worked. After a Sphinx's Revelation revealed no help with lethal creatures in the red zone, Wafo-Tapa nodded, silent, and scooped up his cards.

The constant stream of Mutavaults and 1/1 fliers was able to take out the French phenom in a heavily unfavored first game. Though Dagen still had two more to go, it got much easier from here.

Before the match, Wafo-Tapa talked about how his views on the match-up after sideboarding had recently changed. Though he has strong additions, like the Detention Sphere and Gainsay, Dagen's deck also becomes more acutely focused on beating the control match. Negates and more Jace, Architect of Thought (and even a Jace, Memory Adept) changes the angle of attack, allowing more versatility.

In the second game, though Dagen had to mulligan, he again posed early questions for Wafo-Tapa to answer. However, this exam was easier for Wafo-Tapa to ace. Dagen's early game involved three Tidebinder Mages. Though they turned on his Thassa, God of the Sea, not only were they no better than Grizzly Bear, but a simple Detention Sphere wiped all of them away.

By this time Wafo-Tapa had taken damage well into digits. The pivotal turn came when Dagen emptied his hand with two mediocre creatures – Frostburn Weird and Judge's Familiar – still unable to turn on Thassa again. Wafo-Tapa tapped out to Hero's Demise the Judge's Familiar on Dagen's draw step. This allowed him to play around any counterspell-like shenanigans from the owl. However, this also meant that Frostburn Weird turned into a 4/1 and smacked Wafo-Tapa down to just 1 life. But I couldn't count on a the hands of a Hundred-Handed One how many times Wafo-Tapa has won the game on 1 life. He had a full grip of cards, and a resolved Jace, Architect of Thought blanked any of Dagen's one-power weenies from being of any use. 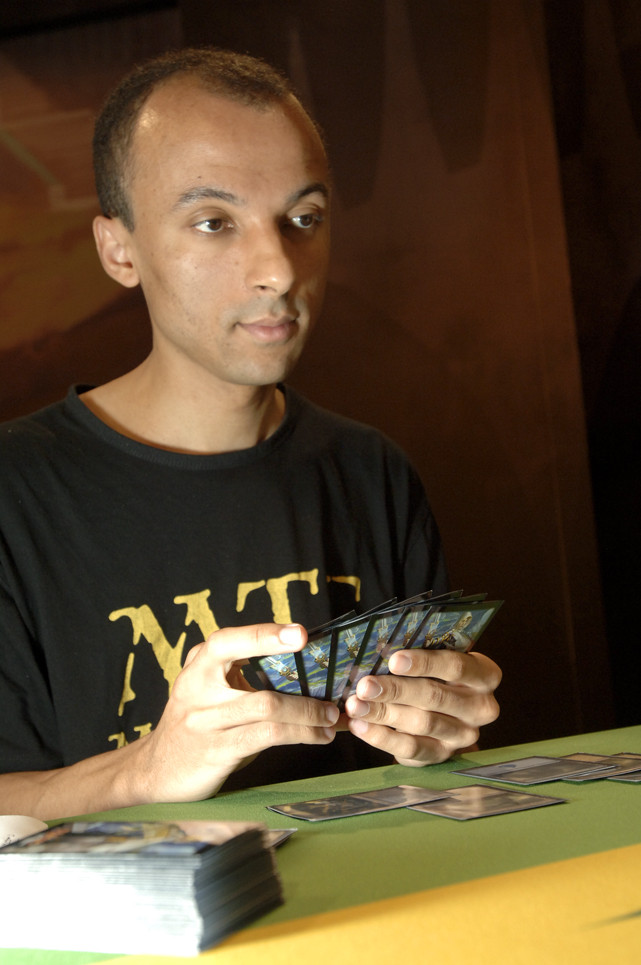 Wafo-Tapa carefully looks at plays he must make to get into the late game.

Dagen knew he had to fight through both the Jace and a Supreme Verdict, but he had drawn just the cards to do it. His last two in-hand were Mutavault and Master of Waves. The Master provided enough force to kill through a Jace, and if Wafo-Tapa tapped down to cast Supreme Verdict, unless he had the follow-up Azorius Charm as well, Mutavault would cruise to victory.

Dagen had quickly put his opponent's back against the wall. Though any control player understands the importance of collected confidence in those situations, and Wafo-Tapa was characteristically stoic, it is a very difficult position to be in. Oddly, it was Dagen who was nervous. In his first Pro Tour Top 8, he was two games up on a veritable monster. Was this Dagen's hero's quest? Was beating the Wafo-Tapa his first ordeal?

Dagen mulliganed to six, audibly sighed and rolled his head around his shoulders. He was set to be triumphant.

His early Tidebinder Mage was thwarted, but his Nightveil Specter set the stage for his Bident of Thassa, which removed the powerful sideboard card Gainsay. This was a good start. But Wafo-Tapa acted like it was nothing at all, and got Dagen back to sighing simply by revealing a Supreme Verdict off a Jace, Architect of Thought activation.

And soon after a flurry of removal and counterspells, Wafo-Tapa tapped out to cast AEtherling into an empty board. Dagen excitedly used his own Jace to reveal the top three cards, and his foot began lightly shaking under the table when one of the three cards revealed was Cyclonic Rift. But it only delayed for a turn. And Dagen would need more than just one turn to get himself back in this match. Wafo-Tapa was still on 17 life and had the most unkillable creature in Standard on the table. 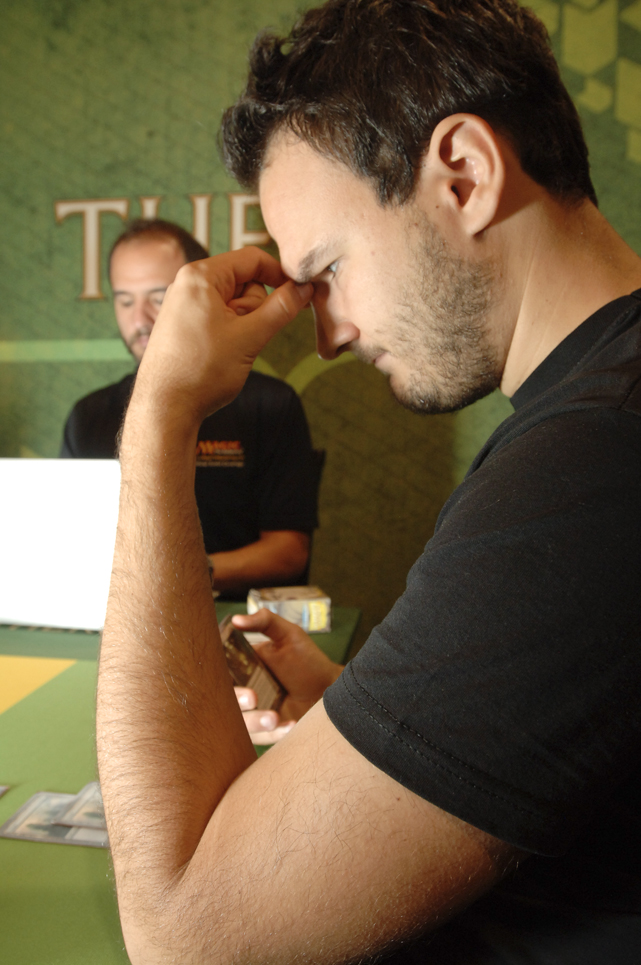 Dagen struggles to find relevant plays in the third game.

Dagen played the rest of the game with his face in his hands. Hunched over the table whenever he had passed priority. The Bident of Thassa was still allowing him a steady stream of creatures, but Wafo-Tapa seemed to have all the right answers. Two Nightveil Specters might have seemed imposing, but were easily dispatched with a Detention Sphere, and the usually impressive Mutavaults were just chump for the 4/5 Inevitability Train. Very soon after that, Wafo-Tapa had taken his first game.

In the third game, Dagen kept his most aggressive hand yet. He went one-drop, two-drop, three-drop with Judge's Familiar, Tidebinder Mage, and Thassa, God of the Sea. Everyone including the God came in the following turn and took Wafo-Tapa to a very quick 8 life. Though Wafo-Tapa had the Specter, Dagen had planned on that, and was able to follow with another Judge's Familiar and a Specter to activate the Thassa and get in for another 5. Adding this to the untapped Watery Grave from last turn, Wafo-Tapa was at 1 life, and passed the turn facing town 8 power's worth of creatures. Wafo-Tapa had used scry early on to move two Doom Blades to the bottom of his library because his hand already had a Doom Blade and Supreme Verdict, and he wanted to find ways to kill either a planeswalker or a God, he thought scrying the removal away was the correct play. But at 1 life, looking at quite a few creatures, perhaps he wished he'd made a different decision.

Dagen asked for a Master of Waves. While hovering the card above the battlefield, awaiting the OK, his eyes darted back and forth. He had thought through every out Wafo-Tapa could have. He could have attacked before casting the Merfolk, but if Wafo-Tapa didn't die on the attack, it meant he had removed most of the blue devotion anyway. So it was better to make extra guys before losing his attackers. There was no cost to do so, because if it didn't matter, it was because he had one. The card racing through his mind was Elspeth, Sun's Champion. If Wafo-Tapa killed his attackers, turning off the Thassa, and untapped to cast Elspeth, the extra elementals would make a difference. His hand was still hovering holding the creature.

The Master resolved and made six tokens. The attack step happened just has Dagen had planned. A Doom Blade and Azorius Charm took out the attackers, morphing Thassa out of creature mode. Dagen passed the turn back. Did Wafo-Tapa have the Supreme Verdict to wipe away the tides?

He did not. And the Wafo-Tapa extended his hand. Pierre Dagen's first ordeal was completed. He would go on to his next challenge, fighting the mirror. American pro Sam Black was next on deck.

Pierre Dagen wins 3-1 and advances to the Semifinals!