As far as Magic tournaments go, I've never really believed in home court advantage. Sure, there is less travel involved. Sure, you can probably sleep in your own bed, or at least somewhere where you may be more comfortable than the competition. But I've never really bought in to the idea that players from a certain city or country have an advantage when the tournament is held in that city. I mean, I've never won a Grand Prix in Indianapolis despite living there. Though I do kind of suck… 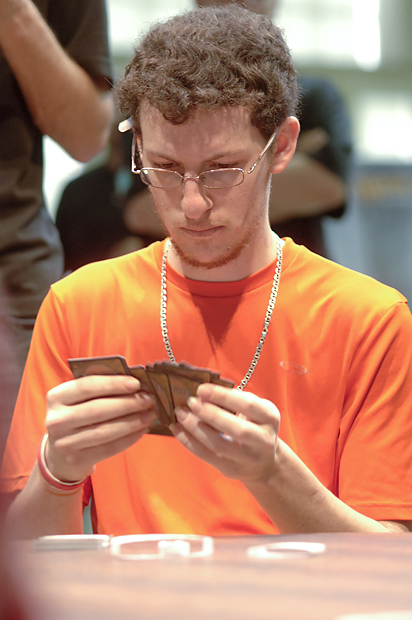 Despite my refusal to believe, two Japanese players are fighting for the title of Pro Tour Champion here on their native soil. One of them, Tsuyoshi Fujita, is fighting for history. Tsuyoshi Fujita is history. Fujita was the first Japanese player to be inducted into the Pro Tour Hall of Fame. Here in Nagoya, he is fighting for his second. Already recognized as one of the best Japanese deckbuilders, let alone players, Fujita was inducted as a Hall of Famer in 2007, putting him in the third class. It's always a great story when a Hall of Famer comes out of the woodwork to perform well at a Pro Tour. It was amazing when Jon Finkel came out of "retirement" to absolutely crush the competition in Kuala Lumpur, and when Kai Budde racked up yet another Pro Tour Top 8 in Amsterdam. It was great to see Tsuyoshi Fujita and Rob Dougherty making a push for Top 8 here in Nagoya. And it was perfect when the crowd cheered as Fujita's name was announced. 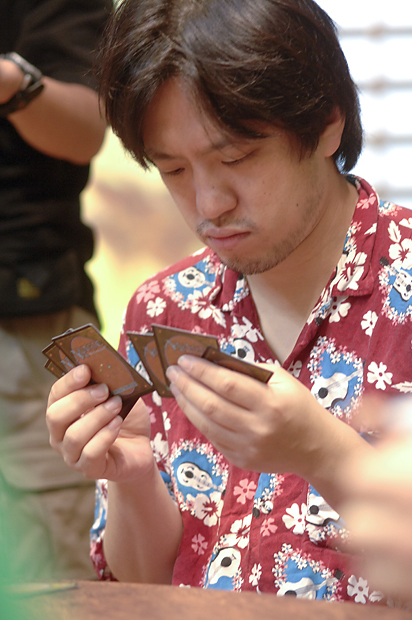 Tsuyoshi Fujita drafts what he would later call his worst deck of the tournament.

Fighting against what appeared to be destiny here in Nagoya was David Sharfman, a Florida Magic player playing in his first Pro Tour Top 8. It's fair to say Sharfman is up against a bit of a legacy. It isn't fair to say that he's inexperienced, though. He made the Top 8 of US Nationals in 2008, where he made Top 8 on the strength of an undefeated run through the Booster Draft portion of the event. He also won a little event known as Grand Prix Paris, a Scars of Mirrodin Limited Grand Prix, the second largest Grand Prix ever. He knows his way around Limited, as well as pressure-filled situations. If nothing else, his 5-1 performance in the Booster Draft portion of this event proves that he is well equipped to deal with whatever comes his way.

Fujita won the die roll and started with a first-turn Flayer Husk. He followed immediately with a Leonin Skyhunter. The pair of creatures combined to drop Sharfman to 16 over the first three turns. Sharfman's first defense was an Auriok Replica which came in to play on his third turn. A Neurok Invisimancer came down to make sure that the Flayer Husk snuck past, and Sharfman dropped to 13. It looked like Fujita had assembled a deck that was similar to the lightning-fast evasion deck he 3-0ed yesterday's Booster Draft portion with. Sharfman got an attack in with his Replica before playing a Blade-Tribe Berserkers.

Fujita moved his Flayer Husk to the Invisimancer and attacked Sharfman down to 8. After combat, he added a Copper Myr to his team. His offense appeared to be slowing down. Sharfman dealt with the unblockable creature and the Husk all in one fell swoop with a Turn to Slag. He attacked with both of his creatures, dropping Fujita to 13. Fujita swung back, dropping Sharfman to 5. He once again had no play. Sharfman swung for 5 more, knocking Fujita to 8. After attacking, Sharfman sacrificed his Replica for a Kuldotha Flamefiend, wiping out Fujita's team and putting him in the danger zone. When Fujita's draw yielded nothing, he conceded the first game.

Fujita decided to play first again with his aggressive deck, bucking the drawing trend that so many payers had been making in this oft attrition-based format. Unfortunately, his keep was fairly passive. He had only a Rusted Slasher for his first four turns while Sharfman built an Occulus and a Spin Engine. When Sharfman made a Blisterstick Shaman to deal with the Slasher, Fujita looked to be in dire straits early into the second game. He stabilized a touch with a Loxodon Partisan to stave off the bulk of Sharfman's troops, but the Spin Engine kept trucking, dropping Fujita to 12. He added a Blade Sentinel to his team after combat, bringing him to four creatures. 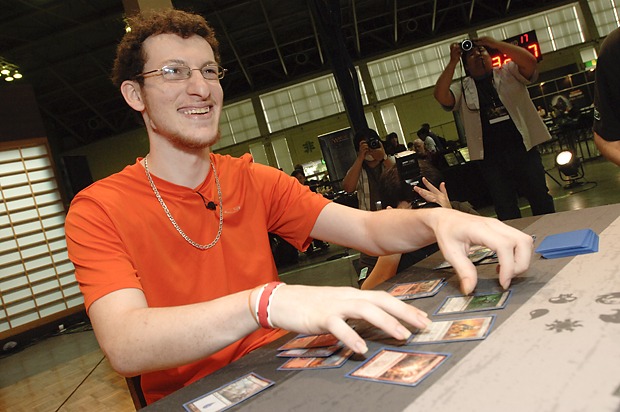 Sharfman has a great big American grin for the cameras.

Fujita thought for a while before deciding to play a Sky-Eel School and a Flayer Husk on his team. He was inching closer to matching the board position that Sharfman displayed, and Sharfman couldn't justify spending most of his mana on the Spin Engine, so he was happy to stop attacking and massage the board. Fujita took advantage of the lull to attack with his Sky-Eels, dropping Sharfman to 17 and adding a Slash Panther to his team after combat. Sharfman used an Into the Core to stop the Panther and Flayer Husk cold, but Fujita kept the Husk around with an Apostle's Blessing, presumably to equip at a later time to his Sky-Eel School.

With Fujita's life total at 9 and his army weakened, Sharfman struck. A Vapor Snare returned the Partisan to his hand, leaving just the Germ behind. Sharfman made his Spin Engine unblockable and swung with his team. Fujita traded with the Shaman, but the damage was done. He dropped to 3. Facing 3 unblockable damage next turn, Fujita drew his card, failed to find removal for the Engine, and conceded the second game.

Fujita wasted no time in destroying the Spin Engine Sharfman played on his third turn, using Divine Offering to make sure he wouldn't meet the same fate as last game. Unfortunately, he did waste time building a board position. He didn't make a nonland permanent until a Sky-Eel School on turn five. Meanwhile, Sharfman had cast Vault Skirge, Blade-Tribe Berserkers, and Auriok Replica. Fujita's life slowly ticked down. He attacked with his Eels and added a Leonin Skyhunter to his team, but declined to block any of Sharfman's creatures on their next attack. Fujita dropped to 14. Fujita swung with his team, dropping Sharfman to 11.

Fujita's face falls along with his fortune.

After untapping, Sharfman went for a huge life swing, using Vapor Snare to bounce Fujita's Loxodon Partisan. He also aimed a Blisterstick Shaman at Fujita himself and swung into a tapped board. Fujita had a Vapor Snag to bounce the Berserkers, saving himself some damage, but he still dropped to 7. Sharfman rebuilt his berserkers and passed the turn. Fujita's swing back with the Skyhunter dropped Sharfman to 9.

Sharfman once again sent his whole team, but not before blowing up Fujita's Partisan with a Turn to Slag. Fujita blocked the Shaman with his Sky-Eel School, dropping to 1. He drew and played a Gremlin Mine. Then… he thought. Eventually, he chose to attack with his Leonin Skyhunter, leaving his Sky-Eel school as his only blocker. When Sharfman went to end it with a Kuldotha Flamefiend, Fujita responded by bouncing both of Sharfman's artifact creatures with a Quicksilver Geyser. Sharfman calmly untapped his next turn and replayed his two creatures. Fujita was scrambling. He found a couple of little creatures for defense, but Sharfman had a Steel Sabotage to return one of them to Fujita's hand, clearing the way for a single point of damage to get through.

"This was my worst deck of the tournament," Fujita said with a smile as he shook Sharfman's hand and wished him luck. 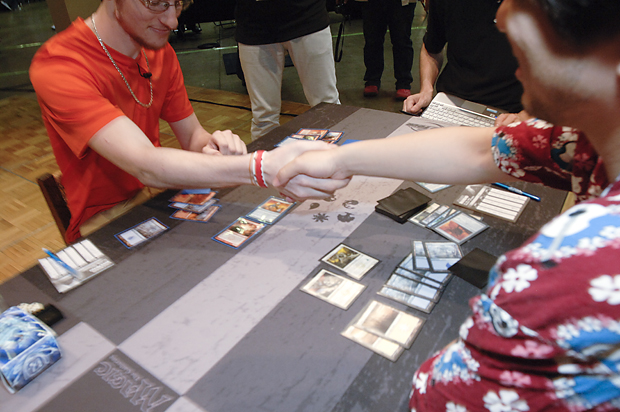 David Sharfman defeats Tsuyoshi Fujita 3-0 and advances to the semifinals!