Quarterfinals: I Got a Right to Feel d

players shuffled in complete silence, and though they brought their A-game, neither brought a die. Gravy trainer Tim Aten was looking to continue the ride, while Ben Zoz was a member of the 2004 National team and anxious to don the red, white and blue for Team USA once again. 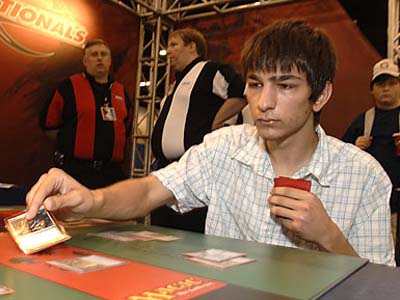 Zoz brought his Solar Flare, with tricks and tools and fatties aplenty, while Aten went with his trusty 'Tron build, with pretty much the same things but in different colors.

Both players developed their mana early, neither ready to commit a "real" main phase spell. Ben blinked first and tested the waters with Dimir Signet which met a Spell Snare. On his turn, Tim cast Compulsive Research, looking to find the third piece of 'Tron.

Court Hussar hit for Ben and over the turn went. Aten assembled his 'Tron, and Keiga hit like something weighty. Tim let out a solemn sigh, though it was Ben who needed to react in a hurry. Compulsive Research let him dig for answers: Angel of Despair and Yosei hit the bin, ready to be circumvented into play when the time was right and the permission had his back.

Tim dropped an untapped Steam Vents and tried Wildfire, a.k.a. Just Win This Game Right Now. Zoz had Remand and lived to tell, at least for one more turn. Keiga zoned, a Signet hit, and then over it went.

Keiga met Mortify and nabbed Hussar as (small) compensation. Facing 1 point per turn instead of 5, Ben took a moment to exhale, then calmly Remanded Tim's next attempt at Wildfire.

Still stuck on five mana but sensing weakness, or a lack of permission, in Aten's hand, Ben cast Zombify, which Tim answered with "obviously." Down went Shivan Reef.

Ben liked his initial seven, while Tim went fishing for 'mo better blues. Happy with his six, Game 2 got under way.

Ben dropped Boseiju early and both players added Signets, anxious to get their mana up the ramp. Annex and another Boseiju took care of the legendary land, and then Ben Mortified the enchantment to get back his permission-free land. And then dropped another Boseiju. Both Aten and the judge reached for the legends to bury them, with Aten getting there first.

Zoz shook it off and cast Persecute for blue next turn, which annihilated Aten's hand. Five blue cards hit the bin, with only Demonfire remaining in his grip.

With four Signets but only one piece of the 'Tron in play, Aten tried to steal a land with Annex, which met Remand. His next Annex stole Godless Shrine, though only for a turn; Mortify brought it back to its rightful home.

Yosei joined Ben's team, then met Confiscate and turncoated over to Tim's side. Angel of Despair brought Yosei back for a tearful reunion, and Tim was forced to Demonfire it into the RFG. 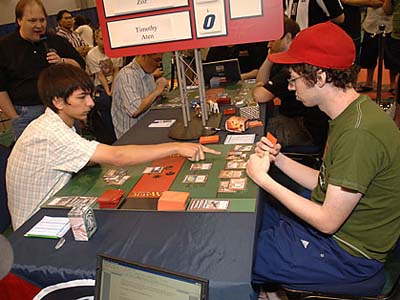 Nationals Top 8 players, A to Z

The Angel went into the zone, and when Ben announced Cranial Extraction, Tim conceded.

Again Aten mulliganed, but seemed content with his starting six, while Zoz kept his seven.

Zoz resolved his own Research and found his fourth land, while Aten stockpiled his mana and kept his hand full. Ben's Signet met Shattering Spree, and suddenly it's Aten way ahead in the mana race, 7-4, though with only one 'Tron piece in play.

Zoz took 2 from an untapped Shrine and another 2 from Boseiju to get off Persecute. Two Hinder and Mana Leak binned and left Aten with only another 'Tron piece in hand.

Free from potential permission (or theft) spells, Ben dropped Yosei and started to swing. Court Hussar helped him plan ahead, while Aten ripped Confiscate, nabbed the legend and the best laid plans of mice and all.

Angel of Despair tried to blow up Confiscate, Aten had the Leak…

"Zoz's Persecute couldn't do anything about the blue cards on the top of Tim's library." -Randy Buehler's play by play

…but Zoz had the Remand. And now two 5/5 flyers in play. Frustrated, Tim Annexed Miren, and down to Mana Leak in hand, he waited patiently for Ben to send the team.

Instead, Ben cast another Hussar in his main phase, padding his hand in the event of something catastrophic, and then sent for 11, which took Tim down to two. Aten drew his card, shook his head and they moved onto Game 4.

Both players kept, and Aten had a Signet and two 'Trons into play on turn three. His Compulsive Research met Remand, and delayed his search for the assembly, at least by one turn.

The turn-four Persecute met Mana Leak and allowed Tim to AnnexGodless Shrine while Ben was tapped out. However, Ben cast another Persecute next turn, took Compulsive Research, and saw only two lands.

Aten topped Remand, which held off Cranial Extraction, and the Mana Leak that found its way into Tim's hand put it to bed. Another Remand jumped to the top of Tim's deck, and a Compulsive Research dug him into Annex on Watery Grave.

With a half-dozen 'Tron pieces and five other lands, Tim couldn't find anything worth spending it on. Water, water everywhere, and not a drop to drink. 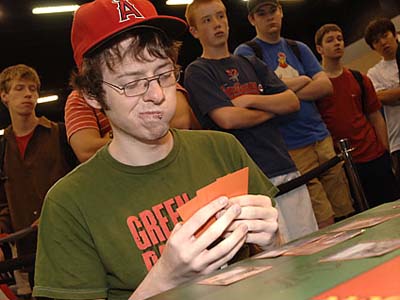 Tim Aten tries to suck out his lip ring.

Zoz dropped Yosei with much less glee than is usually reserved for the Stasis on a stick. Immediately, Confiscate took it over, and the permanent count was somewhere around 25-7. And then came Wildfire. 15-3 was the adjusted permanent count, go ahead Ben.

Zoz simply tapped his entire three mana and Mortified Confiscate. Aten answered with Keiga, chose not to block the ensuing attack and went to 6 in the process. Keiga swung back and Zoz was at 5.

Aten drew Blaze, put it on the table and segregated his mana; he decided to try for 8. Zoz had no response and the match moved onto game 5.

With a trip to the Louvre on the line, both players took their time shuffling, and while the mood could be described as dead serious, they seemed relaxed, as if this was a playtesting session with a free trip to Paris thrown in for kicks.

Aten's turn-four Annex was the game's first action, though it met Remand and he left himself amazingly vulnerable to:

Best Rats Ever much?

However, Ben had no slam dunk follow-up, and could only drop a Signet and Compulsive Research for something to kick Aten while he was down. Tim used the last card in his hand, Tidings, to scratch back into this game, but it met Remand, and down came Yosei.

Hussar granted Zoz more card advantage, and he Cranial'd Tidings, to a large groan/sigh/wow from the crowd.

"Persecute your hand and four Remands is not enough for Zoz."
- Randy B.

With Aten at 6, Zoz added another Hussar and entered hardcore think mode, doing whatever he could to make sure that nothing went wrong, a la Demonfire you. Aten drew his card, offered the hand, and Ben Zoz is headed back to Worlds, while Aten is sure to contemplate the benefits of tapping out for Annex vs. not losing your entire hand.