"There is only the win."

The winner of the Pro Tour gets an automatic invite to the World Championship in Nice, France later this year. Already a member of the Magic Hall of Fame, there is absolutely nothing Chapin wants more than to be the World Champion of Magic. With only 19 points, Chapin is a bit off pace to secure a regional or at-large invite.

His opponent is Jamie Parke, a longtime East Coast Magic player from the NYC crew that spawned players like the legendary Jon Finkel. Parke has two Worlds Top 8s, including a finals appearance in Memphis 2008. Parke is also one of only a handful of players to have a Pro Tour Top 8 in each of the past three decades. 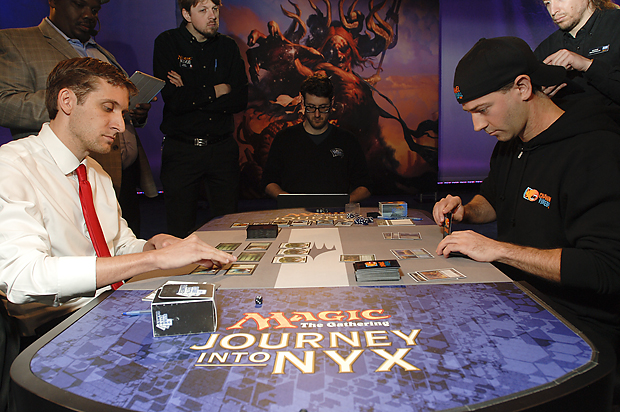 Hall of Famer Patrick Chapin's goal from this Top 8 was a win to qualify for the World Championship. Jamie Park, on the other hand, was looking to cement his stay once again on the Pro Tour.

Chapin is playing a Junk Midrange deck that he describes as simply playing as many of the best rares in Theros Block Constructed that you can cram into a deck. It has a base of Sylvan Caryatid and Courser of Kruphix that have been the hallmark of this event. Supplementing that base is are other very durable creatures, spot removal, and Elspeth, Sun's Champion. Chapin believed that his deck had a reasonable match-up against BUG Control, and was fortunate enough to have tested against the deck extensively alongside his teammates from Pantheon.

Parke happened to be one of those teammates from Pantheon, and his deck is the same deck that the remainder of the team chose to play: BUG Control. This deck takes the same Courser/Caryatid base, adds an even greater amount of removal, and dips into blue for the resilient Prognostic Sphinx and Kiora, the Crashing Wave. This was one of the most-played and successful decks in the field both on Day 1 and Day 2, putting three decks into the Top 8. Parke's version is heavily geared towards defeating the aggressive decks in the field, eschewing main-deck Thoughtseize and Ashiok, Nightmare Weaver, for a more versatile suite of removal.

Before the match, one of the things Chapin told me about the match-up was that the BUG player getting an early Caryatid was going to be very important.

"Their game just gets infinitely better if they can get a Caryatid down on turn two," he explained. 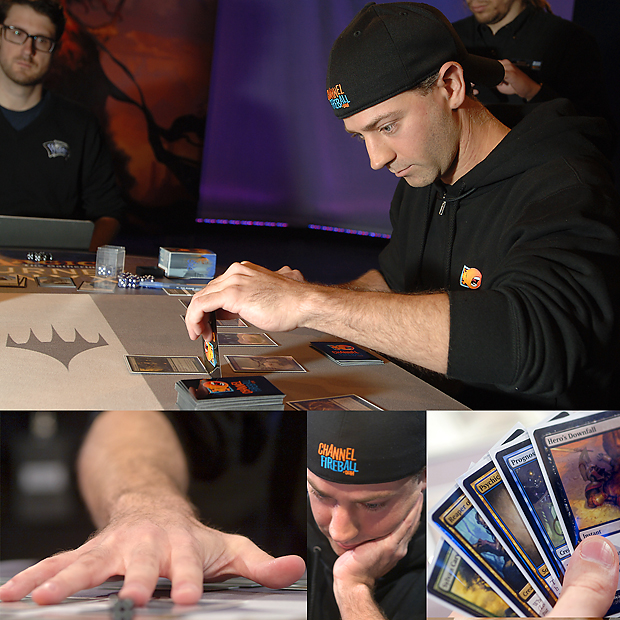 Parke's BUG Control deck's star creature, aside from the Caryatid/Courser combo, is the resilient Prognostic Sphinx.

The first game opened with exactly that play, Parke landing a Caryatid on turn two, though he didn't really use it to power anything exceptional out. Chapin played the first of his powerful rares on the sixth turn, getting three tokens out of an Elspeth, Sun's Herald, before she died to a Hero's Downfall. Parke was the next to add a little gold to the board, making a Courser of Kruphix to his side, but that, too, died to a Downfall. Parke followed up with a Kiora, the Crashing Wave, using her to draw a card and begin to play out the glut of lands occupying his hand. He also had a Drown in Sorrow to wipe away Chapin's tokens, keeping the fragile Kiora safe.

With a large advantage to this point in the match, Parke couldn't have been happy when Chapin cast a Fleecemane Lion, immediately making it monstrous. Lacking Elspeth, Parke's BUG Control deck has virtually no way to kill the Lion once it gains hexproof. What he does have, though, are difficult to kill creatures with five toughness, such as the Prognostic Sphinx that he drew with Read the Bones. When Chapin attacked with his team, Parke was able to block the two biggest threats on Chapin's side and kill the rest with Bile Blight, bringing the game back to parity.

Chapin began indirectly attacking Parke's hand. During Parke's upkeep, Chapin used a Hero's Downfall to effectively tap the Sphinx and force Parke to discard a card. This also helped clear the way for his team to attack on the next turn, the Lion hitting Parke down to 9. Chapin also cast a Polukranos, World Eater, but it was immediately dispatched, alongside his Courser of Kruphix, by a Silence the Believers. 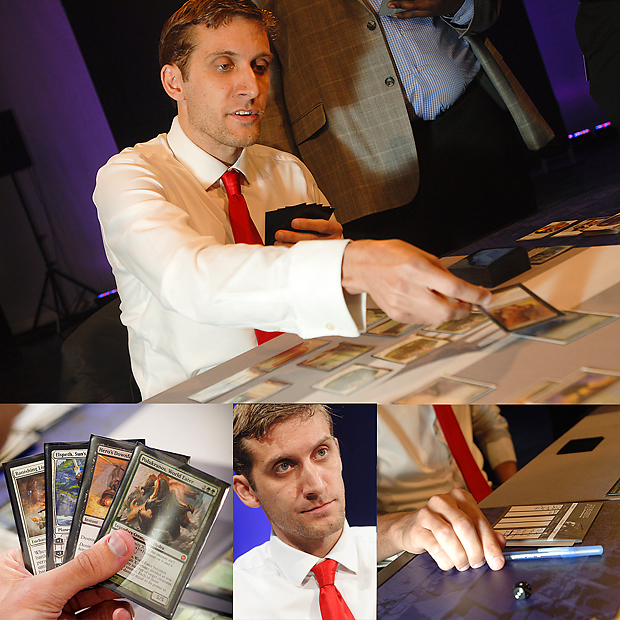 With plenty of Pro Tour experience and a masterful team backing him, Chapin battles with a fiery desire for a Pro Tour victory.

When Parke found a second Sphinx, it spelled the beginning of the end for Chapin. 6 points of flying damage represented a two-turn clock. The first swing dropped him to 6 and scryed five cards to the bottom of Parke's library. On the second turn, the hammer fell...but for Parke instead of Chapin. Ten lands tapped, and Silence the Believers hit the table. Chapin had jokingly warned Parke that he was going to be "silencing so many believers" on a previous turn, but Parke wasn't laughing now. It forced Parke to empty his hand and cleared all but the Sphinxes from his board. It also tapped the Sphinxes, keeping Chapin alive. Chapin cracked back, dropping Parke to 7. Parke untapped his lands and looked expectantly at Chapin. Seven lands tapped as a smile crept over Chapin's face.

"I just want you to feel something sometimes," Chapin laughed as he picked up his cards. He didn't have the second Silence the Believers.

"Sick, sick, sick," Parke said with a smile partially induced by having taken the first game from Chapin and partially from having just been the victim of a savage slowroll.

Chapin began the second game with a pair of cats: Fleecemane Lion and Brimaz, King of Oreskos. Parke once again opened with the ominous Sylvan Caryatid, allowing him to both Thoughtseize away a Boon Satyr and Hero's Downfall the Brimaz in one turn. Chapin was also holding a pair of Coursers of Kruphix in his hand, but lacked the second green mana to cast them. When he played a Forest that Parke knew wasn't in his hand, he cracked a smile.

"Had it," he said, drawing a chuckle from Parke's side of the table.

This allowed him to begin to cast the Coursers from his hand. The key turn in the game came when Chapin Thoughtseized Parke, noting a Caryatid, Prognostic Sphix, Psychic Intrusion, and Kiora. Chapin thought for the full amount of time he was allowed before taking the Caryatid from Parke's hand. 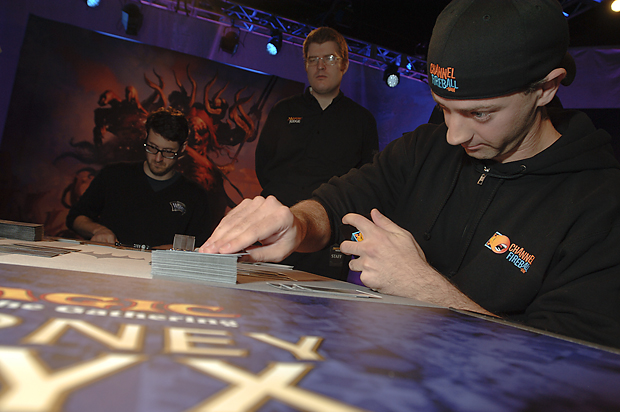 Parke hopes for some mana, looking to change the tides of this game.

"It's what Paul Rietzl would do," he said.

"I'm just kidding," Chapin said. "Paul would have taken the Sphinx. Mostly because it's the right play. Sometimes you've got to go with your gut, though."

Chapin's gut appeared to be correct, as Parke found himself unable to draw a land that would enable him to cast either of his five drops in hand. He did find a Reaper of the Wilds, which played excellent defense against the monstrous Fleecemane Lion, but it was only a matter of time before Chapin found a way through. Chapin made a key attack, sending two Coursers and his Lion over to try and kill Kiora, and Parke decided to aggressively trade away his Carytid for Chapin's Courser. Chapin told me after the game that he felt that the attack was a terrible one, but because of Parke's decision to trade off his blocker, it ended up being the ideal attack.

Parke never drew another land, which was complicated further when Chapin was able to use a sacrificial attack from Brimaz and the rest of his team to take Kiora out. When Chapin added an Arbor Colossus that Parke was forced to trade his Reaper for, the game was effectively over. With no defense and no fourth land, Parke conceded to a superfluous Elspeth from Chapin. 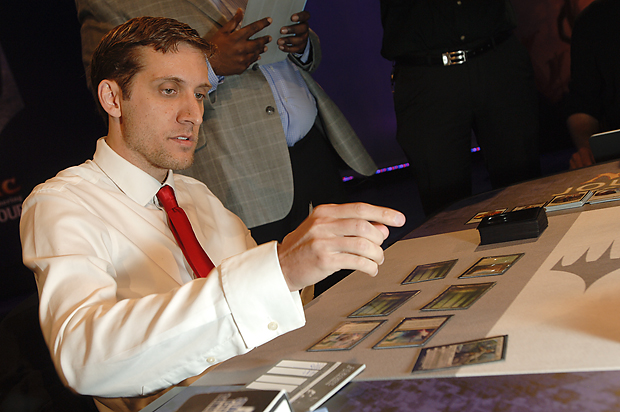 Chapin unleashes the power of the Sun's Champion.

In the third and final game, a simple one-mana spell determined the outcome of the game. A Thoughtseize from Chapin revealed two copies of Hero's Downfall, Silence the Believers, Bile Blight, and a Kiora.

"As soon as I saw that his hand was all removal, I knew that I was in good shape," Chapin told me. "It was very good for me that he didn't have any blue cards."

He took the planeswalker and proceeded to set about drawing out all of Parke's removal with a steady stream of threats, though he was careful not to walk into Silence the Believers. Parke did manage to remove the next four threats that Parke had in hand, but eventually he took the lead. As the saying goes, all it takes is one threat that doesn't die to get the job done. Once he had drawn out all of the removal spells in Parke's hand, Chapin made the big swing, bestowing a Boon Satyr on a leftover Elspeth Soldier token to drop Parke to two. Parke made a show of drawing his next card, passing the turn to Chapin. When Chapin drew and cast Thoughtseize to strip the final card in Parke's hand, he flipped it over to reveal Mana Confluence, extending his hand to Chapin. 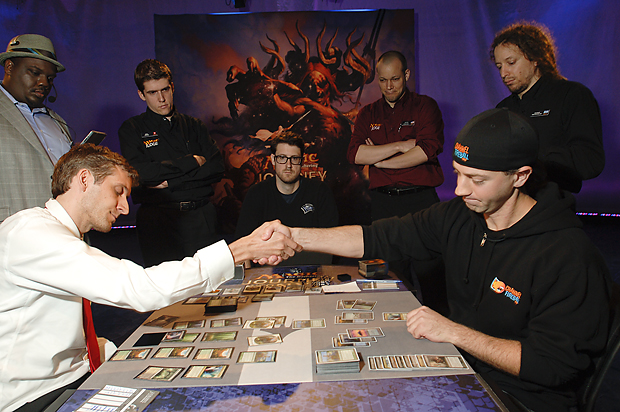 Chapin's hope to qualify for the World Championship with a Pro Tour victory remains alive and well.

Patrick Chapin defeats Jamie Parke 2-1 and advances to the Semifinals!