A flurry of planeswalkers, mulligans and missed land drops put Rob Castellon in too deep of a hole for even his innovative 4-Color Midrange deck, as Dusty Ochoa and his Esper Control list advance to the Semifinals 3-2.

Castellan nearly came back from a 0-2 deficit on the sturdy back of Sire of Insanity, but when the Rakdos-flavored demon failed to show up in time in the final game, Ochoa's assortment of Ætherlings and Obzedat, Ghost Councils were able to take the game and the match.

But not without making Ochoa work for it. 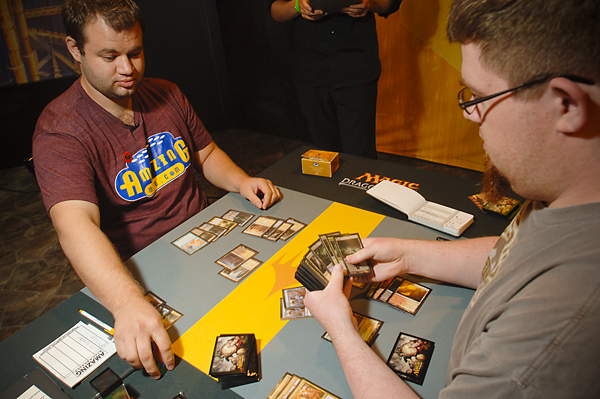 "I'm not sure how it works, but it works perfectly. Your deck looks kind of like a pile of good cards, but it works," Ochoa said. "You have a good deck."

"People say my deck is just a bunch of cards, but no, there's a lot of synergy," Castellon said.

Ochoa's deck, on the other hand, has a lot of counterspells and more than enough Jace, Architect of Thoughts to power through what Ochoa thought was a tough match.

The first two games were lopsided affairs. In the first, Castellon mulled to a two lander and never found black mana. In the second, Castellon's draw was so mediocre that Ochoa cycled through a whopping four Jace, Architect of Thoughts, using the last one's ultimate—the first time Ochoa has ever activated the ability.

In his entire life, not just this tournament.

"I've never used this guy's ultimate," Ochoa said, while reading his own card. "I haven't played this deck outside this tournament. I haven't played a single game with it besides this weekend."

In fact, Jace was so dominant that Castellon, despite a stated preference for getting rid of Ætherling as soon as possible, used Slaughter Games to remove them later on in the match. 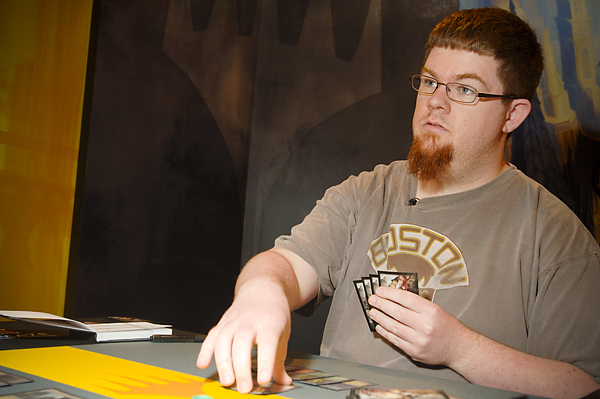 Normally one to Slaughter Games away Ætherling, Castellon was under such pressure from Jace, Architect of Thought that he exiled away the planeswalker during this match.

Despite the early bad beats, Castellon stayed calm and methodically evened the match over the next two games. He used some slight mana troubles for Ochoa to work his way into a position to resolve Sire of Insanity in both games with Ochoa's side of the board empty, and won from there, even with Ochoa at high life totals. In the fourth game, Castellon actually killed two Obzedat, Ghost Councils before Sire put the final nail in the coffin.

"Sire Insanity is fun for everyone," Castellon said after the fourth game.

"Really, just you," Ochoa offered back, acutely aware of how much "fun" the Sire had been in the past two games.

But Sire never made an appearance in the fifth game, and Ochoa was able to use a series of counterspells and finishers to, bit by bit, beat down. It's not something Esper is terribly well known for, but Ochoa thought it was merited in this particular matchup.

"I can't wait too long, because he has inevitability," Ochoa said. "Slaughter Games makes it difficult, because I only have three win conditions in my deck."

Additionally, Selesnya Charm hits all of his creatures except Ætherling, Pithing Needle shuts that down, and Castellon often names Ætherling well before anything else.

"I can beat a Sphinx's Revelation for ten. I can't beat an Ætherling," Castellon said. 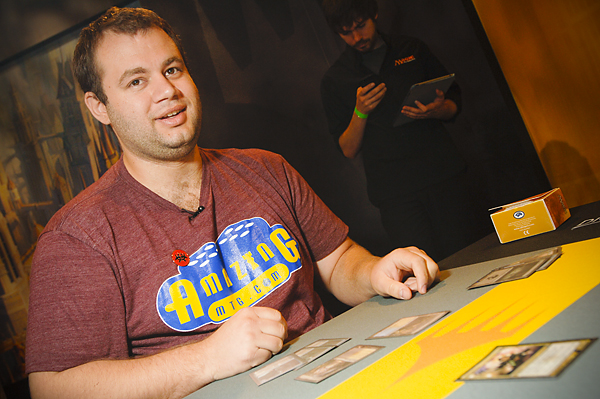 Ochoa's land-heavy deck actually went down in lands to bring in more spells in this matchup.

Ochoa recognized that fact and made an interesting sideboard decision. He sided out a single Sphinx's Revelation and a land, reasoning that he already played more land than other Esper decks (28) and that he could afford to lose one land if he sided out a single Revelation, which he did to lessen the impact of Slaughter Games.

Of course, then he had mana issues in the two games he lost.

Ochoa's deck looks slightly different than the stock Esper lists that dominated the tournament. While most opted to play cheaper creatures like Precinct Captain and Sin Collector, Ochoa eschewed those completely from his main deck and instead loaded up on Angel of Serenity and Obzedat, Ghost Council, a pair of creatures who gave him a leg up against control and midrange decks.

He also chose Obzedat, Ghost Council over Blood Baron of Vizkopa, a choice that certainly sets him apart in the mirror. Blood Baron is fairly impotent against Ætherling, and the lifelink often isn't relevant against other Esper decks, whereas Obzedat is both very hard to kill and a faster clock. In fact, Martin Juza lamented earlier this weekend that he was playing Blood Baron instead of the Orzhov guild leader.

The loss also dropped Castellon out of contention for the Rookie of the Year title. He and fellow Top 8er Andrew Shrout both came into Pro Tour Dragon's Maze with zero Pro points, but were set to pick up anywhere from 20 to 30 in the Top 8. The leader, however, Felipe Tapia Becerra, had 25 points, meaning Castellon or Shrout needed to win the tournament to take home the award. Both players lost.