Ishida won the die roll and elected to play first. Jiang got the game rolling on turn two with a Vulshok Gauntlets. Ishida sat back playing out a Stalking Stones and then a Nim Shrieker on his fourth turn. The turn three Bottle Gnomes from Jiang go through unblocked and Hematite Golem joins play on Jiang's side. Slith Bloodletter and a Krark-Clan Grunt help Ishida develop his ground force and with the help of an artifact land the Shrieker flys in for a damage. Jiang drops down a Goblin War Wagon and the Shrieker flys back over his head with the backing of yet another artifact land. 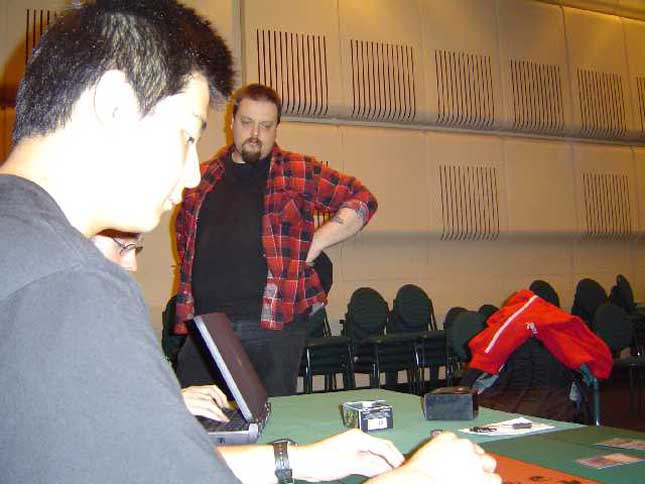 Loading up his War Wagon with the Gauntlets Jiang crashes in to the red zone with all his men. The Hematite Golem gets Electrostatic Bolted and the Grunt and Bloodletter square off against the Gnomes and Wagon respectively, with the Bloodletter regenerating. Ishida plays out a Leaden Myr and sends in the Grunt and the Shrieker for the attack, dealing 5 damage and dropping Jiang down to 12 life. Jiang untaps his War Wagon, which is always a nice trick with the Gauntlets attached but is forced to leave it back on defense. The Shrieker flys over the top for 3 damage and Ishida ends his turn.

Viridian Shaman from Jiang knocks out the Myr and Ishida animates his stones at the end of the turn, powering up the Shrieker to 4 points of damage. He drops another Shriker at the end of the attack phase and the two Shriekers clunk in for 4 damage on the next turn. Jiang buys a turn with an Electrostatic Bolt and another with the sacrifice of his Bottle Gnomes but it just delays the inevitable.

Jiang decides to play first in the second game and lays out a turn two a Copper Myr that gets Bolted. A turn three Yotian Soldier is Jiangs answer, but it looks to be shut down by the Goblin Replica summoned by Ishida. Viridian Shaman clears the way for the Yotian to peck away at Ishidas life. 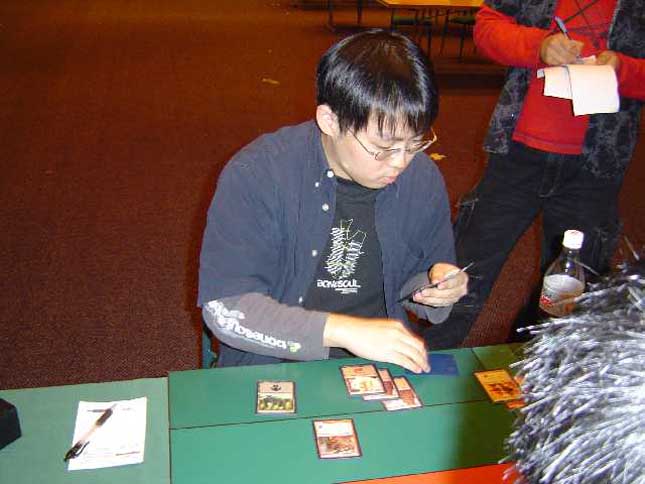 A Krark-Clan Grunt tries to hold down the fort for Ishida but its of little use when Jiang drops down his Vulshok Gauntlets and slams in with it on his Yotian Soldier. Ishida begins to establish his board with an Alpha Myr but Jiang is unphased, pushing both his men into the red zone. That's the point where the whole game turned sour for Jiang. The Grunt stepped in front of the little Myr and the Myr of Ishida jumped in front of the Yotian Soldier, pumped up by a Fists of the Anvil. Jiang lost his whole board in the attack phase and a Hematite Golem after the attack phase was bolted. Ishida then piled on the pressure with a Nim Shrieker and it finished off the job as Jiang was unable to draw anything to deal with it.