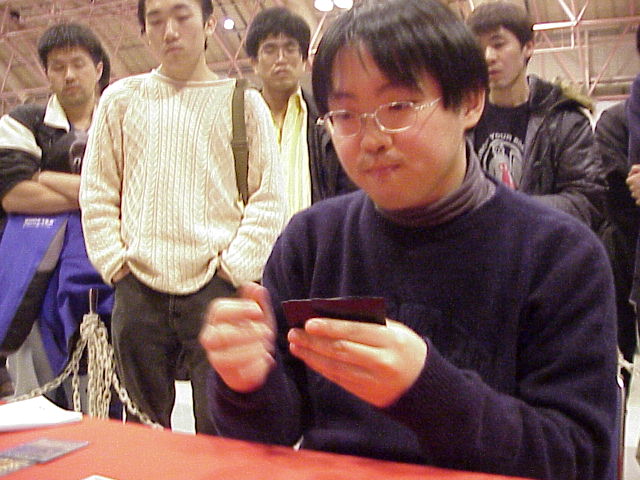 As if being an amateur in the Top 8 of a Grand Prix weren't enough pressure, Yuki Murakami had to face off against Itaru Ishida, one of Japan's strongest players. His nervousness was apparent. He had a stock of tissues to deal with his sweating hands.

Murakami had to mulligan, playing first, but his second hand was acceptable. Ishida pressed with a Vampiric Tutor for Hermit Druid, but the Druid was countered. Merchant Scroll got Murakami his Intuition, but he would have to wait. He let Ishida have Buried Alive.

Ishida sent three Ashen Ghouls to the graveyard, and pitched another to his Mongrel. On his upkeep, he pitched again, and brought back two angry Ghouls. The attack brought Murakami to seven. Murakami Intuitioned for Accumulated Knowledges and cast one. He got Donate and Capsize, but no Illusions. It looked like he was done.

But no! Waiting patiently at the top of his deck was Illusions of Grandeur. He cast it, took Ishida's beats, and Donated it on the following turn. Ishida had nothing spectacular, and folded. 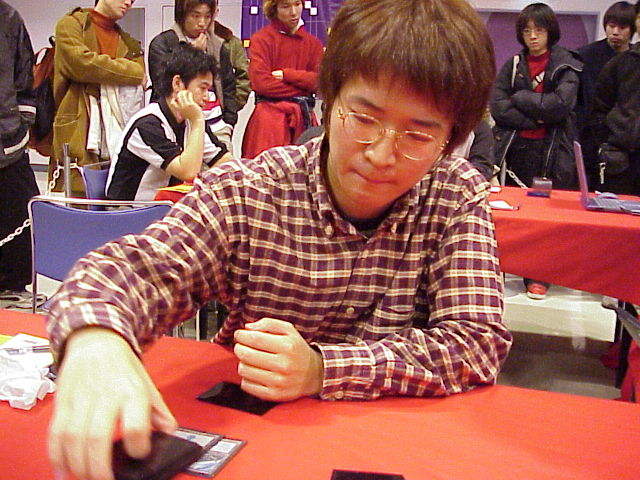 For Game 2, Ishida led with Duress, snagging Force of Will, and seeing that Murakami held two land, Merchant Scroll, Fire/Ice, Donate and Accumulated Knowledge. He followed up with Wild Mongrel. Murakami answered with Sapphire Medallion. He needed a land. Particularly after Ishida showed him three Krovikan Horrors and a Squee, the ability to hit for six a turn.

But fortune was on Murakami's side. Land number three was on top of his deck, and Ice stopped the bleeding for a turn. Ishida Tutored up a Pyroblast to stop Intuition, but the combo pieces were just falling into place for Murakami. Merchant Scroll got Force of Will, and from there it was Illusions, Donate, good game.