Quarterfinals: It's Easy Being Heezy

of the two American players in this quarterfinal match felt they had an overwhelming advantage. Mark Herberholz played about 30 practice games on Saturday night and felt that at best he had a 55/45 advantage. 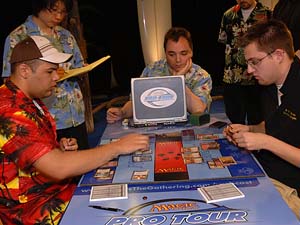 Two of America's finest battled in the quarterfinals

"I think this matchup is really draw dependant," explained Herberholz. "So it basically is just based on luck but on the upside I am a pretty lucky guy."

"I agree that it is pretty close and it's going to come down to who draw better," nodded Osyp. "I just hope an American wins this PT."

The players looked for a die or coin to use in order to determine play or draw. I had neither on me but offered up the last digit of a dollar bill for Mark to guess at whether it was even or odd.

"Does zero count as even?"

After extensive shuffling, the players bantered about the possibility that absence of a Japanese player in the Top 8 was actually just a ruse. The joke went that winner of the Finals match would have to face off against Final Boss Kenji Tsumura, like in some street fighting game.

"I said I was playing first right?" asked Osyp.

"I don't remember that at all," teased Mark.

Osyp mulliganed while Mark showed the reporters his hand that included a Burning-Tree Shaman, Giant Solifuge, Moldervine Cloak, Frenzied Goblin and just enough lands to make it all happen.

"I know you're keeping…" sighed Osyp as he continued to shuffle his deck to achieve maximum randomization. Osyp kept his hand and I have to admit that I was somewhat surprised to see Mark deal the cards out on the table and proceed to pile his deck out on top of them.

"That hand was too slow," he explained later. "I really need Kird Ape and a two-drop against him - especially on the draw."

He got his wish and followed Osyp's Urza part with Mountain and Kird Ape. Osyp was not happy to see that and asked "Done?" as he rolled his eyes.

"You think I have like Chrome Mox here or something?" laughed Mark.

Osyp just put down Urza pieces while Mark had another Kird Ape and Stomping Grounds. One Urza piece later, a frustrated Osyp scooped up his cards and lunged for his sideboard:

"That was a pretty absurd mulligan," admitted Herberholz as he also swapped five cards: 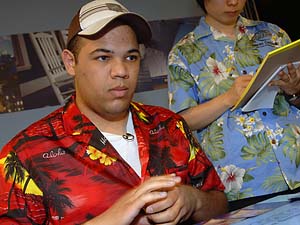 IN: 1 Flames of the Blood Hand
2 Tin-Street Hooligan
2 Naturalize

There was apparently a moratorium put on all banter. Osyp shuffled intently with a simmer of frustration that threatened to boil over at the slightest provocation. Mark, on the other hand, seemed pleased but a little embarrassed by his easy - perhaps even lucky, as he suggested earlier - win. He just kept his eyes on his hands as he shuffled and tried not to look too pleased.

Neither of these two extremely vocal players said a single word the entire time - and they took a considerable amount of it shuffling - until Osyp led with his traditional, "I said I am playing first, right?"

Another Urza land start for Osyp that was followed by Kird Ape for Mark. Osyp could only shake his head and burned his Tendo Ice Bridge counter to blaze the Ape for one.

Dryad Sophisticate came down on the following turn. Osyp forged some colored mana with an Izzet Signet, which allowed him to cast Telling Time at the end of Mark's next turn. Mark Naturalized the Signet but Osyp had found Shivan Reef.

Another Sophisticate from Mark earned the two for one Pyroclasm that everyone - including Mark - knew was coming. Mark was stalled on two lands and played Tin-Street Hooligan.

Osyp made Meloku and looked like he should even things up but Burning-Tree Shaman made using the legend a pricey proposition.

Osyp dug for cards with Compulsive Research and then tapped an Urza land to activate Meloku and began picking up the same land. Osyp quickly realized that he wanted to reset his Tendo Ice Bridge and but Mark was adamant that Osyp had picked up the Urza land and a judge who had been watching the match agreed with Mark. As a result Osyp could not Remand or Mana Leak the Char that Mark used to clear the path of the flier.

Osyp once again concluded his game with the body language of someone who was angry and frustrated.

There was still no dialogue between the two players other than Osyp declaring his intention to play first. The atmosphere at this table was markedly different from all three of the other matches. It almost felt like our table was sequestered (on top of the sequestering of the matches from the rest of the hall). The other three tables had players not only interacting with one other but with the other tables. It was a completely different and easy-going vibe than in our tense little corner of the room.

Antoine Ruel asked about the status of the match. He seemed surprised by the game score and urged Osyp to tighten up.

Mark looked back, "What about me?"

"You are a bad matchup for me," grinned the 0-2 Antoine, who soon fell in record time to Craig Jones.

"I guess you have to think positive," Mark agreed.

Kird Ape was almost too much for Osyp to bear. "It must be nice," he clucked but the Ape only nibbled away for one and added Scorched Rusalka as his follow-up. Osyp Repealed the Ape at the end of the turn. Mark considered fizzling it but decided to pick it up instead.

Oysp Electrolyzed the two one-drops but took one from the Rusalka on the way out. Mark reinforced with an unenhanced Hooligan and Osyp was able to cast Telling Time end-of-turn without fear of Naturalize.

Keiga announced his presence with authority a turn later and it dwarfed Mark's Burning-Tree Shaman that had been made possible by a late-arriving Karplusan Forest. Osyp had to decide if he could attack or not - he was at 16. Ultimately he passed the turn and kept the dragon manning the gates. He Remanded another Shaman which landed successfully a turn later.

You could hear the hum of the air conditioner and the squeak of the spotter's shoes it was so quiet - and it was a carpeted area. Osyp finally decided to Pyroclasm away the Hooligan. Suddenly the game started to creak to life. Mark fired off Flames of the Blood Hand EOT and untapped into Giant Solifuge.

He sent in the entire team and Osyp took six from the two Shamans and ate the bug with his flier. On his turn he cracked back for five and finished Mark with a Blaze for thirteen. Independent auditors were called in to verify the mana but in the end there would be a Game 4.

Neither player had many changes to their sideboard plans to this point although they did go through the motions of sideboarding each game. Mark decided to make some actual alterations this game: 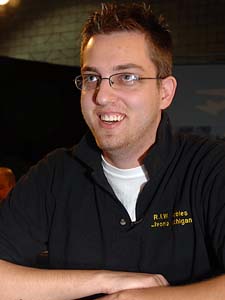 Herberholz was smiling, even after dropping a game

With a game under his belt, Osyp relaxed visibly and both players were able to laugh and interact with each other.

Osyp's good humor was short lived though as he had to go back to the well for six new cards once again. "Every game, please."

Mark continued to have the same opening and kicked off with Kird Ape.

"Must be nice," smirked Osyp.

"It is," nodded Mark as he flashed him the Forest.

"I knew it must be this game," shrugged Osyp who suddenly seemed like a condemned man at peace with his fate. Mark bashed in for two and had the 3/3 Scab-clan to follow.
Osyp was quickly at thirteen by the time he got to cast Telling Time at the end of Mark's third turn.

"Char you," announced a confident Herberholz.

Osyp went through the motions and all but conceded when he tapped out to cast Compulsive Research and Signet. He was at four with five points of damage on the table.

"Your drinks are on me tonight," declared Mark as the two players shook hands. Osyp smiled, "At least you will smash Tiago in the semis."

Final result: Mark Herberholz defeated Osyp Lebedowicz 3-1 and advanced to a very favorable matchup against Tiago and his playset of Howling Mines.