Quarterfinals: It's Getting Hot in Here 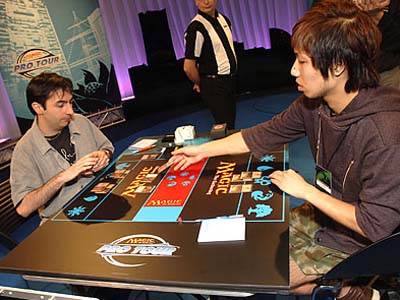 Raphaël Lévy and Tomoharu Saito both come to the quarters with impressive resumés.

unday competition started hot, as Hall of Famer Raphaël Lévy squared off against PT-Charleston winner Tomoharu Saito. Both players found their Yokohama success with red decks, Saito with red-green against Lévy's mono. The games promised some fiery back and forth action for this Quarterfinal five-game series.

Lévy kicked off the single unsideboarded game. His first play of Keldon Marauders was met perfectly with Saito's Mogg War Marshal. Lévy reflected on his attack, hardly obvious either way. In the end he attacked to force Saito to block. Tomoharu did of course defend with his War Marshal and put a second token into play. Lévy made a Blood Knight and passed the turn, but the real power came from Saito's side when he cast the indestructible Stormbind. Stormbind put Raphaël in a tough spot, as the timeshifted enchantment promised a guaranteed victory should the game last long enough. Unfortunately for Lévy, Saito could also buy that time by throwing his cards at Lévy's creatures before burning Lévy out.

Yet what could Raphaël do but play more creatures and continue to attack? Blood Knight dealt damage before and after his Sulfur Elemental traded with the Goblins. A second Blood Knight died to 'Bind, but Saito being stuck on three lands did allow Lévy to deal more damage than would normally be expected.

Things took a poor turn for the Frenchman when Saito found his fourth mana. Magus of the Scroll came down for the Japanese player, leaving Tomoharu four cards in hand. Lévy's powerful Wildfire Elemental and that same Blood Knight attacked directly into it. Would Saito take some extra damage to start throwing shocks around with his Magus?

Saito had a better plan and absolutely zero desire to take unnecessary damage. The Magus blocked the Emissary, and Stormbind was used on the Knight. The discarded Fiery Temper was madnessed out to finish the Emissary. Just like that, all the creatures were dead. Lévy seemed annoyed to have plucked the Temper, but when another was thrown at his head for five damage, Lévy began to realize how many his opponent had drawn this game. The third Temper further seared the point. 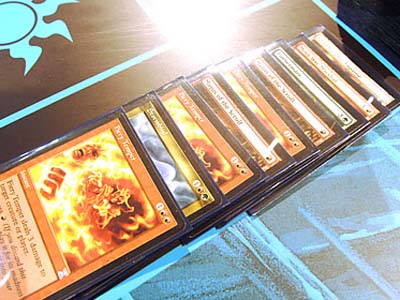 Yet Raphaël wasn't quite out of it. His early creatures had dealt some damage, and his storage lands continued to charge. Tomoharu began to realize Lévy's potential Disinitgrate was getting lethal. With an opponent at 6 life, Saito pondered what to do with his lone card and five mana at the end of Raph's turn. Doing some quick math, Tomoharu decided to pitch the card at Lévy to bring him to four. Tomoharu untapped, drew, and slammed Timbermare on the table for the final 5 damage and the win. Lévy could only shake his head and flash his X spell before picking up his cards.

The players were utterly silent as they prepared for Game 2, except for Tomoharu's ungentle self slap-slap. Was it focus, or a warning against failure?

Lévy had some difficulty resolving his sideboard decisions. The players did have their opponent's decklists before the match began, but it was hardly a map. Lévy's sideboarding decisions were solely based on what Saito brought in and took out, and vice versa. Lévy remained on the fence between Sulfur Elemental and Serrated Arrows, but eventually made his choice and presented.

Both players spent an extra few beats debating their opening hands. Borderlines or bluffs? Eventually they both kept and they began. Saito led with a turn-one suspended Bolt, which apparently isn't as bad a play as we were led to believe. Tomoharu so enjoyed dealing three to his opponent he did it again on the next turn. Raphaël waited for the Rifts to close before throwing out Sulfur Elemental and Magus of the Scroll. Sulfur eventually died, but not before dealing some damage to Saito-san. Lévy had a fun decision on the next turn. What to do with two Mountains, Rift Bolt, and Disintegrate in hand? Rift Bolt gets suspended, but does Raph attack for the guaranteed 1 or go with a two-thirds chance on dealing 2? Lévy knew it was hard to win without some risk and went for the Scroll. His gamble paid off, and the Magus dealt 2 to Saito before Rift Bolt dealt 3 more. Saito tried to hold on, but a few turns later double Disintegrate for 6 put Raphaël on the board.

After some minor sideboard tweaking, both players were quick to keep their opening seven. Lévy started with two effective cards in the matchup, Greater Gargadon and Blood Knight. A second Blood Knight came later, matching Saito's pair. Neither player wanted to attack with their 2/2s for a number of turns as they built up mana and cards. I didn't think Blood Knights could fall victim to Pacifism.

Finally, Raphaël felt it was time to make his move. Spells and guys traded back and forth, and in the end everything died, feeding Lévy's Angelic Consumer. A Browbeat from Saito was the first to change life totals to 20-15 in the Japanese player's favor. With some counters left on the Gargadon, Lévy could attempt damage at sizeable risk from Dead // Gone. Raphaël decided to play it safe. Sulfur Elemental was played at the end of the turn, which very suddenly took two. Saito replaced his fallen man with the still-potent Wildfire Emissary. At two time counters, Lévy made his big move and added some red mana, then sacrificed lands to attack with the Gargadon. This was a tough decision for Saito, and he spent a number of minutes working out the angles. The Emissary eventually got in the way, after which Lévy merely spent his mana on the charge land. 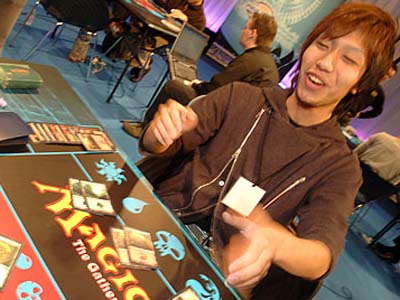 Saito in a rare moment of joviality.

The next turn, Saito showed one of the benefits of playing two colors and played Utopia Vow on the 9/7 beast. Raphaël wasn't happy to see the Aura, but with his newfound mana, he played an Avalanche Riders to destroy Saito's only source of green. Saito showed professional talents on the next turn and slammed a freshly drawn land into play to cast another Wildfire Emissary. Lévy again went into the tank. With Sudden Shock, Fiery Temper, and Disintegrate in his hand, Lévy needed to remember not to die before killing the enemy. For his part, Saito correctly gleaned Lévy's land counting as an X-spell tell.

Wildfire attacked next turn and Raph was in a pickle. How much could he take? Was he going to need to kill the Emissary anyway? He let Saito pump once before throwing both instants at the 2/4 with a grimace. Leaving himself only Disintegrate, Raph was quite unhappy to see an end step Sulfur Elemental from Tomoharu, followed up by Mogg War Marshal. Raphaël angrily aimed his Disintigrate at the Elemental, while still taking damage from the goblins. Unfortunately for Raphaël, this was when his deck decided to cough up a stream of lands. A sudden shock on the token let Lévy live at one, but a Rift Bolt next turn versus a War Marshal couldn't do the job.

Again Lévy went to his sideboard, eager to find the perfect tweak. In came a pair of Serrated Arrows to handle the difficult-seeming War Marshal. Saito remained perfectly content with his build, looking at his sideboard only to confirm its fifteen card status.

Raphaël started this fourth game with a Magus of the Scroll. Raphaël followed up with a suspended Gargadon, which has really been great all weekend. A Blood Knight from Tomoharu got X-ed for two, and Magus continued to ping. Tomoharu had enough and played his War Marshal and a Dead on the Magus, greatly shifting the tenor of the board. Lévy did find one of his sideboard cards for the War Marshal, and a Serrated Arrows was played to contain the horde. A second War Marshal came after, but Lévy had another strong defender in Wildfire Emissary. The Emissary took a Utopia Vow, strongly indicating that Tomoharu had another card ready to combat the unwinding Greater Gargadon.

In the meantime, the Goblins came in. The ones unpeppered by arrows dealt damage to the Frenchman. Lévy stuck with the defensive plan on the next turn and played another Serrated Arrows. Saito considered and played Sulfur Elemental, knowing full well it would get -1/-1ed to death. That's exactly what happened, but Tomoharu had a gift at the top of his deck: Pendelhaven. The legendary land played beautifully with the army of War Marshal and brethren currently on the field. Raphaël tried to stem the tide as best he could, but the damage was adding up. Saito further compounded Lévy's problems with a assault token. 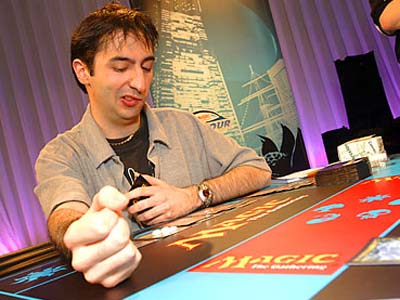 Raphaël wasn't done yet. Temper took down the Elephant, the remaining Arrows finished up the goblins. Lévy's Gargadon even came down, although it was immediately Gone and re-suspended. Tomoharu, who was near the end of his cards at this point, gave a big smile on the next turn and cast a large Wildfire Emissary. Lévy shrugged, flashed out a Sulfur Elemental, and attacked with it into the Emissary on the following turn. Arrows? Burn spell? A bluff? Tomoharu wanted to find out. The Emissary did damage the Sulfur Elemental, who was fed into Gargadon's maw, before dying itself to Rift Bolt. Tomoharu replaced the fallen Wildfire with a fresh one, and Raph went down to 4. Out of options, he went all-in and sacrificed everything to kill the attacking Wildfire Emissary next turn. He even connected with his Gargadon once, bringing Tomoharu under 9 life. Was it enough?

Unfortunately for the hall of fame resident, it was not to be. Tomoharu played his trump, Timbermare, and attacked, ending the game and the match.

Tomoharu Saito advances to the Semifinals!