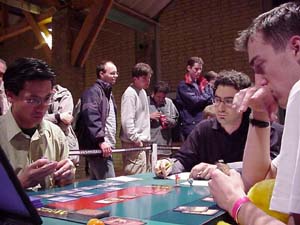 Olivier Ruel needs no introduction, coming out fresh from his second place in Osaka recently. He brought his Winnie the Pooh as usual, and that definitely brought him luck so far.

Tan is a business consultant from Hannover, a regular at PTQ's in Germany and Grand Prix events all over. His first breakthrough was a second place at Grand Prix-Moscow in 2001.

Tan played the first creature, an Angelic Wall. Olivier played the Pianna, Nomad Captain. Olivier killed the wall by crackling clubbed it after having the wall blocked his nomad. Tan did not fade and played his Cephalid Looter. Ruel replied with Pardic Arsonic, no treshold this time. After some deliberacy Tan played out his 2/2 Balshan Collaborator that was not so dangerous this time.

Rune played Halberdier to keep the threat going, Tan replied directly with the Prisonic Gift, which took away the Halberdier. Olivier took his Pardic and Nomad into the red zone, Tan decided not to block. Ruel played then Rites of Initiation, with three cards in hand and Tan was at 10, ended the first game.

Tan made Olivier started first again. Olivier mulliganed once again with a one-land hand, his six cards hand was much better. Tan kept a 4 lands hand.

Tan made the first play by a turn two Patrol Hound; which got killed directly by Ruel´s Firebolt. Blessed Operator hit the table from Tan and was removed from the game by Second Thought when Iwan sent it into the red zone.

Tan kept his pressure up playing Hydromorph Gull, backed up by Balshan Collaborator. Olivier had a Barbarian Lunatic on his side, which dealt the first two damage to Tan. He made then another Lunatic. Ruel then killed the Balshan by saccrifying his tapped Lunatic. Faded not Tan played out Aquamoeba and Teroh Faithful. Ruel played a Crackling Club and passed the turn. Tan slowed down after drawing, for the first time in this match, to re-exam the situation. Tan then sended his Gull into combat, which was killed by the Club and the Lunatic direct damage power. Tan then played a decisive Chamber of Manipulation. 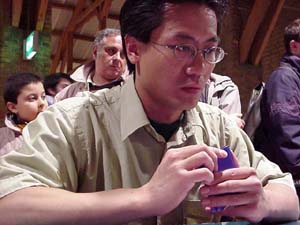 Ruel just laughed and replied with his tiny Mystic Visionary. Tan sent in his creatures like nothing had happened. Ruel blocked the Aquamoeba with the Visionary, played the Gallantry on it. Tan replied by Chambering it.

A ruling question came up of whether or not Ruel was allowed to draw a card for the Gallantry, since the Visionary was no longer in combat, thus making the Gallantry illegal on resolution. Head Judge Davide Bitetto decided that, since Ruel had seen his next card, he had to show it to Tan as well. The card was a Moutain. Ruel tried definitely something here, to get threshold could have been an educated guess - playing his Temporary Insanity to get the control of Tan´s Aquamoeba after combat without much reason. But Tan decided to throw away a card to get that back. Ruel played out his Zealot, which was bounced by Churning Eddie the turn after from Tan.

The table was now Teroh Faithful, Cephalid Looter, Aquamoeba, and Chamber for Tan. The Zealot and Visionary for Ruel. Ruel kept his face smiling, fighting to the end, while Tan was more quiet and concentrated on his task. Soon enough they started sideboarding for the last and final game.

Ruel cracked some jokes, played around with his Pooh. As Pierre Malherbaud won his match against Patrick Mello, Ed Fear made his appearance in the Top8 area. He talked something about his Top 8 predictions, which didn´t have a single right until then, with two quaterfinals already ended.

Ruel decided to play and not mulligan this time. Tan made the first play again with his turn three Looter. Ruel replied by the Lunatic with a comment "going first, so wonderful". Tan used his Looter to find the solution, and found a temporary one with Chunning Eddie, which set Ruel one turn back. The next play was then Patrol Hound to Tan and Lunatic and a Firebolt on the Looter of Ruel.

The Balshan hit the table again. Pardic Arsonist made an apperance on Ruel´s side, with only a Firebolt in the graveyard.

The Chamber came out and joined the party. With four cards in hand Tan had things under control. Ruel did not fade, however, and soon asked permission to enter combat and dealed three damage to Tan by his Arsonist. The life standing was 15 – 14 to Tan.

Zealot came out to help Ruel on his quest. He then used his sideboard tech, Earth Rift on the Chambered land. The match was turned again. 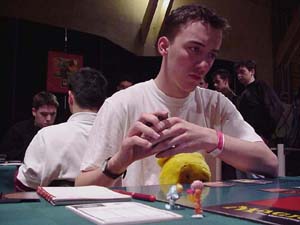 Not many seconds went by before Tan played his good card, Cultural Exchange, giving away the Phantom Whelp and Patrol Hound for Pardic Arsonist and Mystic Zealot, with threshold. The table was turned once again.

Ruel commented on the exchange that he happened to like the creatures he got from Tan. Ruel drew his card, said "And I think you have just lost!" He went on to discard a card to his Patrol Hound and sac'ed the Ravaged Highland for mana. This gave him enough cards in his graveyard to use Temporal Insanity to regain his own Mystic Zealot. He sent all his creatures to the red zone.

Tan blocked the Zealot with the Arsonist, Ruel played Rites of Initiation, discarded his only other card in hand, taking Tan down to two after combat.

The table was as follows: Zealot and Balshan to Tan and two Patrol Hound to Ruel. The life totals stood at 10 – 2 to Ruel. Tan played some creatures, attacked with some. But Ruel had the Firebolt in his graveyard, which he - of course - remembered. The match ended there.