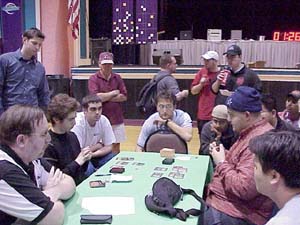 Jeff Cunningham vs. Antonino De Rosa Antonio De Rosa is the crowd favorite. He's from nearby Orlando, Florida and is well-liked locally. A crowd of well-wishers has been following his every move and he has yet to disappoint them – rattling off straight eleven wins before taking intentional draws in his final two matches. His quarterfinal opponent is the lone magic Colony representative to advance to the Top 8: Canadian Jeff Cunningham. (Three other members of the Colony missed the Top 8 on tiebreakers, by the way, as Jeff Fung, Ken Ho, and Chris Benafel finished 10th, 11th, and 12th respectively). Both players drafted red-green decks so this match was expected to be fast and bloody.

De Rosa led strongly in Game 1, with a turn 2 Wild Mongrel. Cunningham answered well, though: turn 2 Werebear and turn 3 Squirrel Nest. De Rosa did his best to play monsters quickly, before Cunningham's squirrels got out of control. He played Springing Tiger and then a 4/4 Ivy Elemental. He used Refresh and Muscle Burst to plow through the growing hoard of squirrels. That left Cunningham without enough time to build up enough squirrels to trade with a 4/4 and a 3/3 so Cunningham started attacking very aggressively. Cunningham did the math and realized that three turns into the future he could deal precisely enough damage to win with Rites of Initiation (getting himself to threshold exactly so his Werebear would be 7/4). De Rosa didn't draw any more removal or any more potential blockers, so Cunningham's plan worked! 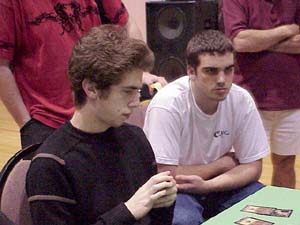 Jeff Cunningham Five turns into game 2, De Rosa did his best to look upset about having another land-heavy draw, but Cunningham knew what was up and declined to send his Archer into De Rosa's Elephant Ambush. Cunningham's intelligence couldn't save him from the Earth Rift that De Rosa sideboarded in against Squirrel Nest. It blew up the only Forest Cunningham had drawn (against 6 mountains). Pitchstone Wall bought Cunningham some time, but De Rosa soon had enough creatures to just swarm through the wall for the win.

I learned between games 2 and 3 that Antonio's real name is Antonino. However, everyone on Tour has been calling him Antonio so he's just decided to answer to either name.

Cunningham played a turn 2 Minotaur Explorer in game 2 and De Rosa removed it with Sonic Seizure ... seemed fair. Neither player had a particularly exciting draw, but they each played them quite well. De Rosa declined to flashback Chatter of the Squirrel so he could bluff an Elephant Ambush and convince Cunningham not to attack on one turn. When De Rosa didn't play an end step elephant, Cunningham committed to an all-out attack on the following turn. That allowed De Rosa to use Temporary Insanity to kill Dwarven Strike Force. Cunningham had a Leaf Dancer dancing in for two points a turn, but De Rosa found a Squirrel Nest of his own along with an actual copy of Elephant Ambush. Cunningham then answered with his own Nest. De Rosa answered that with Earth Rift. 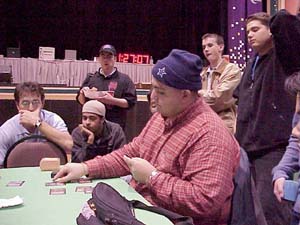 Antonino "Antonio" De RosaThe two players were like heavyweight fighters, throwing punch after punch that just never seemed to knock the other guy down. Both decks were well-drafted and well-built. Both players looked deserving of their reputations as up and coming stars on Tour. As the game neared its final turns, De Rosa had control of everything on the board except for that one annoying Leaf Dancer. With just one point of life left De Rosa found himself two attacks away from winning the game. He pounded on his deck begging "be there!" A Muscle Burst would win the game ... a single point of direct damage would win the game ... Overrun (of course) would win the game ... Leaf Dancer, however, was not good enough. Cunningham had just enough chump blockers to end De Rosa's perfect weekend and disappoint the hometown crowd.

1 Firebolt 1 Chatter of the Squirrel 1 Overrun