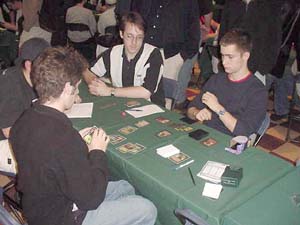 The Top 8 match between Jeff Cunningham and Jacob Rabinowitz didn't exactly contain the closest of games. DCI Judge John Carter commented on the games after Game 2 as "excellent games of solitaire."

Jeff Cunningham is one of the best players from the land up north known as Canada, and this was just another Grand Prix Top 8 for him. Jacob is also a very skilled player, and on his arduous journey to Day 2 , I suffered the wrath of his impressive skill and good luck in the 3-0 bracket.

Both decks in this match contained their fair share of beats. However, Jacob's deck contained more copies of higher-quality cards, and multiples of Limited staples such as Skirk Commando, Barkhide Mauler, and an impressive 3 Elvish Warrior. Jeff's deck contained fine card quality also, with its Gluttonous Zombie, Swat, Infest, and 2 Screeching Buzzard, but seemed like it was lacking in removal otherwise. Jeff's deck was more geared toward racing the opponent with his evasion creatures, and his 2 Shepherd of Rot added to the effort.

Jacob wins the roll and decides to play first. Both parties keep their hand and, the match begins.

At the end of Jeff's turn, Jacob cycled one of his deck's two Barkhide Mauler. Jacob played a mountain and passed the turn. On his turn, Jeff played a Wirewood Savage, a very good in this match-up, and passed the turn. On Jacob's turn, he attempted to Erratic Explosion Jeff's Savage, knowing that it can be very effective for Jeff in the later turns. Unfortunately for Jacob, the spell that was revealed by the Explosion happened to be one of the decks 2 Wave of Indifference.

"I can see that this match is going to go real well for me," said Jacob sarcastically in recognition of the Wave being revealed.

The Savage took a point of damage, and Jacob passed his turn. Jeff attacked with the Savage on his turn and Jacob's life was reduced to 18. Jeff then played a Spined Basher and said go. Jacob played his fourth Forest and then played an Elvish Warrior. On Jeff's turn, Shepherd of Rot and Frightshroud Courier saw play, and then Jeff's turn ended. Jacob then played a Wirewood Herald, morphed a creature into play, and then passed his turn. Jeff played a land, and then played Leery Fogbeast, drawing a card off of his Savage. Jeff then proceeded to attack with his Basher and his Courier. This attack reduced Jacob's life to 13.

On Jacob's turn, he played a land and then attacked with his morphed creature. Jeff blocked the attack with his Fogbeast, and both creatures died. The morphed creature ended up being a Snarling Undorak, another one of Jacob's quality creatures. Jacob passed his turn, and at the end of his turn, Jeff used the Shepherd to reduce his life total to 17 and Jacobs's life to 10. Jeff then attacked with the courier-pumped Basher. Jacob couldn't block, and went down to 5. Once Jeff dropped his Gluttonous Zombie, Jacob realized there was just too much evasion to deal with and after he drew his card, he conceded.

Game 2 was another "solitaire-esque" match, but this time, on the other side of the board. Jacob went first and the game was just a bunch of land dropping until Jacob played his first spell in the form of the Savage.
On Jeff's third turn, he played his own Savage and then passed the turn. Jacob attacked with the Savage, and Jeff took was reduced to 18. On Jeff's turn, Symbiotic Elf saw play, and then his turn was over. Jacob then played Heedless One and passed the turn. Jeff attacked with his Savage, Jacob blocked, and then after damage, Jeff Infested the board, putting 2 insect tokens on his side of the board. He then ended his turn.

Jacob's turn saw Elven Riders, and he then said go. Jeff played his Aphetto Vulture, and passed the turn. Jacob swung in with his Riders, and Jeff blocked with his Vulture. Jacob saved his Riders with Wirewood Pride after damage was on the stack and the Vulture went on top of Jeff's library. Jacob cast Undorak and said go. Jeff drew his Vulture, swung with his tokens, and played the Vulture again, ending his turn. On his turn, Jacob Solar Blasted the Vulture, and Jeff opted for it to go on top of his library again and then Jacob attacked with his Riders and his Undorak. Things were beginning to look grim for Jeff this game.

Jeff played the Vulture again, and said go. On Jacob's turn, he attacked again with his team and Jeff took more beats. On Jeff's turn, he played Screeching Buzzard and a Courier. Jacob's turn rolled around and he continued the assault with his team. This time around, the Courier blocked the Undorak, and then the Courier was sent to the 'yard. Jeff played the Vulture again, and passed his turn. On Jacob's turn, he played his Wave of Indifference, and swung in for the win. Jeff realized he had no way to deal with the Onslaught, and scooped it up.

Game 3 was the closest of them all. Jeff opted to play first, and came out with turn 2 Elvish Warrior. Jacob played his Wirewood Herald on his turn 2. Jeff attacked with his Warrior and Jacob went down to 18. Jeff then played a creature face-down and passed the turn. Jacob also played a creature face-down, and then passed his turn. Jeff attacked with his morph creature and Jacob blocked with his Herald. Damage resolved, and Jacob searched his deck for his Elvish Riders, the same creature that won him Game 2. Jeff played his Screeching Buzzard and passed the turn. Jacob's turn saw another morphed creature, and then Jacob said go. Jeff swung in with the Buzzard and his morph creature, and Jacob blocked the morph guy with his own. 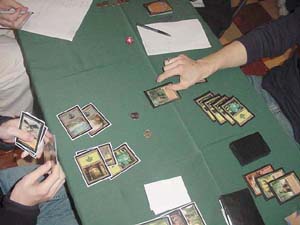 Jacob thought for a second, most likely pondering what Jeff's morph creature could be, and then before damage was on the stack, Jacob pumped his morph guy to 3/3 by casting Wirewood Pride. Jeff then flipped over his morph creature, revealing his Broodhatch Nantuko, to Jacob's dismay. That was most likely the creature that Jacob didn't want the morph guy to be. The Nantuko died, 3 tokens were made, and Jacob was reduced to 16. At this point, Jacob put his morph creature in the graveyard, showing it to be Skirk Commando. For some reason, he thought it died. Immediately, a nearby spectator of Team Academy fame pointed out that it wasn't supposed to be dead, and Judge John Carter agreed.

Jacob played the Riders he searched for earlier, and he passed the turn. Jeff swung in with the Buzzard on his turn, and brought Jacob down to 14. Jeff then played Gluttonous Zombie, and then said go. Jacob attacked with his Riders, bringing Jeff to 17, Solar Blasted Jeff's Zombie, and then said go. Jeff attacked with the Buzzard and the Warrior, and Jeff pumped his Warrior with the Wirewood Pride, saving the Warrior, and killing the morph guy. Jeff then played his second Buzzard and also played his Shepherd of Rot. It was then Jacob's turn, and he decided to attack with his Riders and his once-dead Commando. Jeff blocked the "unknown" morphed Commando with one of his morph guys, and they trade.

The Riders get through, and Jeff is knocked down to 14. Jacob plays his second Commando, a Barkhide Mauler, and passes. On Jeff's turn, he plays his Courier, and then swung in with his Buzzards for 4. Jacob is reduced to 10. On Jacob's turn, he casts Wave of Indifference targeting all of Jeff's creatures, and swung in for ten by pumping one of his men with his Vitality Charm. Jeff is now at 4. Since Jacob's Commando went unblocked, it got to shoot Jeff's Frightshroud Courier. On Jeff's turn, he swings in with his team and brings Jacob to 5. He then plays Symbiotic Elf. Jeff passes, Jacob realizes he may have made a mistake, and then he keeps his team on the defense. Jeff swings in with his flying beats, and Jacob scoops.