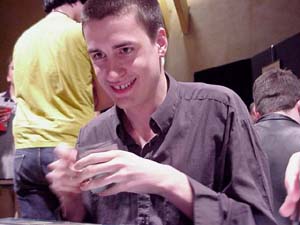 In this matchup, we are in for a battle of aggressive decks. Wiegersma is playing a blue-green tempo archetype. Although blue-green decks cannot directly kill creatures, they feature larger monsters and bounce spells as well as the ability to reach threshold quickly. Wiegersma is also splashing a bit of black for removal spells such as Afflict and Waste Away. Lippert's red-green deck is faster and more aggressive. It also features an array of flashback spells that might allow him to keep up with Wiegersma's blue card economy.

It is unclear who is favored in this matchup but one thing is for certain – the games are likely to be quite fast.

Lippert mulliganed down to six, but as he was playing second it was not quite as devastating. When Wiegersma cast a first turn Basking Rootwalla, he enchanted it with Crackling Club and sacrificed it to kill it.

Nothing was cast for several turns after that, causing Lippert to snicker and comment: "Green decks!" On turn 4 the two competitors finally began to cast spells. Wiegersma summoned a Springing Tiger, which Lippert matched with Nantuko Disciple. Wiegersma also cast Peek to begin working on his Threshold and get a look at his opponent's hand. He saw Firebolt, Acceptable Losses and Reckless Charge.

Lippert drew Elephant Ambush and passed the turn. With some luck, he might be able to catch Wiegersma's Tiger napping. Wiegersma, however had other plans. He sacrificed Seafloor Debris to generate black mana and cast Waste Away pitching a Forest. He was willing to trade three for one to get the Disciple off the table. In response, Lippert cast Elephant Ambush and used the Disciple's ability to give it +2/+2, preventing any attack that turn.

With a 3/3 in play, Lippert cast Acceptable Losses to kill the Tiger (Wiegersma was only two cards away from Threshold) and passed the turn. Lippert was using a flipped over sideboard card as an Elephant token. The judge wrote "Elephant" and "3/3" on a piece of paper, offering it as the new token - but the players refused, unless the judge would draw an elephant on it. The judge complied, though his depiction of the elephant did not quite match that by Arnie Swekel.

Having achieved threshold with some help from Obsessive Search, Wiegersma cast Cephalid Sage, pitching away some pretty good cards – he kept Ghostly Wings, Seton's Scout and Seton's Avenger – both creatures greatly improved by threshold. Lippert summoned a Rabid Elephant and cast Reckless Charge, attacking with both creatures and bringing Wiegersma – who blocked a token with Dreamwinder – to fourteen life points.

Lippert played a seventh land and cast Roar of the Wurm. Wiegersma summoned the two Seton creatures and held the Sage, enchanted with Ghostly Wings back. It was quite a combo – Wiegersma could put damage on the stack and return the Sage to his hand, then look at three more cards and keep one when he recast it. Lippert chose not to attack with the Wurm that turn, casting some reinforcements in form of another Wurm out of the graveyard.

With two Wurms and an Elephant in play, Lippert attacked – but it was not nearly as devastating as such an attack could be. Wiegersma blocked one of the Wurms with a Dilligent Farmhand, which he sacrificed to get a land and double blocked another with Seton's Avenger and Sage. Avenger regenerated and Sage went on the all-paid trip back to Wiegersma's hand. With eight lands in play, Lippert recast Elephant Ambush.

Krosan Avenger was certainly Wiegersma's MVP at the moment, threatening to take out the Token and holding off the other creatures. Undeterred, Lippert cast Barbarian Lunatic and recast yet another card – Reckless Charge – out of his graveyard. Four creatures attacked, and when the smoke cleared, Wiegersma was left at two life with Krosan Avenger in play, facing off against Rabid Elephant and an Elephant token. Wiegersma summoned a Nantuko Disciple and when Lippert attacked he chump blocked a Rabid Elephant with it while taking out the token with his regenerator. Once again at creature parity, Lippert cast Petravark, taking out Wiegersma's only Swamp. Unable to stop both creatures, Wiegersma conceded.

Both players drew mediocre hands in the second game. Wiegersma kept five lands (of all three colors), Dilligent Farmhand, and Cephalid Sage. Lippert's hand featured four Forests and three red cards, prompting him to mulligan. Lippert's new hand was unspectacular, but he could not risk going down to five cards.

Wiegersma opened with his Farmhand and cast Peek on turn 2 rather than sacrifice it for another land. Second Farmhand joined the team on turn four as Wiegersma lacked beefier creatures (he was holding on to the Sage until Threshold was reached). Lippert cast Acorn Harvest as his first spell. Wiegersma killed one of the squirrels with Afflict, much to the relief of the judge whose job it was to draw the tokens – including the ones likely coming soon from the graveyard! 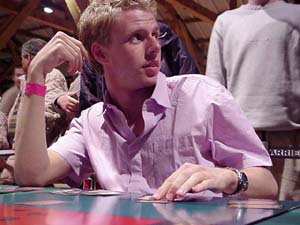 Farmhands bought the farm while blocking the Squirrels and Wiegersma cast an Obsessive Search, getting up to six cards in the graveyard. He also summoned Millikin and tapped it, gaining threshold and finally casting his Cephalid Sage. He found and cast Dreamwinder, shutting down Lippert's offense – or trying to. Lippert spent four cards – casting Sonic Seizure and Acceptable Losses – to kill both creatures, and sent in the furry 1/1's. Wiegersma was not out of gas though – he summoned Krosan Avenger (once again, able to regenerate as there were plenty of cards in his graveyard), and a Cephalid Looter.

Lippert needed to build up his forces some more before he could attack again. He summoned Rabid Elephant, while Wiegersma cast Leaf Dancer that was about to Forestwalk for two damage per turn. Balshan Griffin was up next, putting further pressure on the German player.

Lippert was unable to punch through Wiegersma's blockers and after several turns of attacking with the Leaf Dancer, Wiegersma enchanted one of his creatures with Ghostly Wings and attacked for the kill with two flyers and the Leaf Dancer.

Once again, Lippert had to take a mulligan as he had two Mountains and five 4+ casting cost spells, some double green. And again his new hand was unspectacular, but keepable. Wiegersma kept a hand of Sage, Dreamwinder, Nantuko Disciple, and four lands.

In a repeat of Game 1, Lippert used Cracking Club to kill off Wiegersma's first turn play – though this time it was only a Farmhand. Both played nothing but lands for a while, with Lippert casting Petravark on turn 4 and knocking his opponent down to two lands. Wiegersma had plenty of mana left in hand though and summoned Nantuko Disciple and Leaf Dancer over the next few turns.

Lippert, who added to his army of 2/2 dorks with Petravark, had to cast Acceptable Losses to kill the Disciple. It did not help as Wiegersma summoned a Dreamwinder to block with, followed by a Looter – with Leaf Dancer happily attacking for two each turn.
Lippert summoned Rabid Elephant and was able to get into a damage race for a couple of turns, but Wiegersma ultimately used Waste Away to deal with it. Lippert cast Acorn Harvest twice, with both players at eleven life points, but he was now out of gas and Wiegersma knew it, thanks to Peek. Stuck on only a single Island, he cast Krosan Avenger to block with, rather than something with greater toughness. Of course, Avenger was able to regenerate by this time. Lippert kept drawing land as Wiegersma was putting more and more creatures onto the table.

Once again, superior creatures carried the day for Wiegersma, allowing him to advance to the quarterfinals.