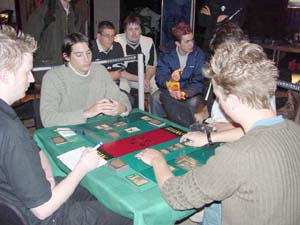 Krause chooses to play first and gets a fast start with Wirewood Elf on turn two followed by his symbiotic cousin on turn three. Florent answered the aggression playing a mystery facedown creature. While Krause increased the beatdown with Barkhide Mauler on turn 4, Florent played another facedown creature. Unable to draw a fourth land the Frenchman quickly had to face a second Mauler.

When the fourth land hit the table Taunting Elf was already in play and Jeudon was only at four life. Despite this bad handicap, he managed to resist using the morph of Gravel Slinger and playing Crude Rampart. As the wall stops the beatdown Jeudon surpisingly starts to control the game. He plays his first flyer and announces his end of turn. Krause draws, smile, sends all of his monsters into the red zone and plays Wirewood Pride on Taunting Elf in response to Jeudon's attempt to kill it.

The Frenchman's starts is far better. It's Krause's time to face beatdown as Jeudon's Boneknitter is quickly followed by two mysterious facedown creatures. And Jens during this time? He played a screeching buzzard and an increeeeeeeeedible, myyyyyyyyysterious facedown creature. Isn't that exciting? Jeudon's beatdown didn't last for long, as Krause revealed Spitting Gourna was his hidden monster and played Symbiotic Beast on the turn after. At this time both players started to keep cards in hand and passing turns. With Krause fearing Wrath and not playing all of his creatures, Florent is waiting to find the best moment to send all his creatures through thanks to Dirge of Dread.

After drawing Wretched Anurid, Florent reached exactly the number of attack points he needed to win on the following turn. Realizing this, Krause sent all his creatures into the red zone including Taunting Elf. As Florent blocked it with everyone, Krause played Tribal Unity for three naming beasts, dealing Florent 25 damage and making his way to his second GP semi final in a row.