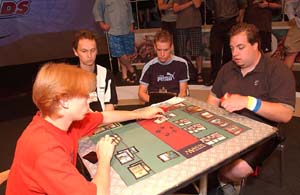 With four Mirari's Wake decks in the top 8 there was bound to be a mirror match in the quarterfinals. Usually such a mirror match ends up as quite a coinflip but these two decks had quite a different character. Remie's deck had four Decree of Justice maindeck where Zink only had two but Zink had Mirari. This should make Zink the control player as he had less threats but more answers to Remie's oncoming soldiers. After sideboarding however, this would be a whole different ballgame. Remie had Call of the Herd to bring in and Zink could sideboard in Brushhoppers and Exalted Angels.

Remie won the coinflip and started off the game with a Krosan Verge – which was pretty good for ramping up to the bigger Decrees. Zink didn't have the land and had to settle for just an Island. The two players continued to play land over the course of the first few turns, with Remie taking advantage off his Verge and found another one. On his sixth turn, the first spell of the match was cast – a Deep Analysis. It went uncontested and Zink played a Cunning Wish at the end of Remie's turn, getting a Ray of Revelation from his sideboard.

Remie flashbacked his Deep Analysis and played out Compulsion. Zink decided not to destroy it with his Ray of Revelation and waited until the end of Remie's next turn. Remie Compulsioned twice before sacrificing it for a card, leaving enough mana open to Mana Leak one of Zink's spells. The German had eight lands out and played a Mirari – which Remie couldn't Mana Leak. Remie only played a land on his next turn, and Zink played out Mirari's Wake, making the game look grim for the Dutchman. Remie cycled one of his Decrees, making eight soldiers.

The soldiers hit the Red Zone but didn't get to deal any damage due to a Moment's Peace on Zink's side. Remie Cunning Wished for Ray of Revelation and took out the Wake, stabilizing the game somewhat. Zink played Wrath of God on his turn, taking down the soldiers. Two untap steps later, Remie refreshed his army of soldiers by cycling his second decree for nine soldiers, but Zink made seven on his own. The soldiers battled and two were left on Remie's side after his attack.

At the end of Zink's next turn Remie started working his Compulsion and fetched a Flash of Insight from his sideboard with Cunning Wish. On his own turn he played Mirari's Wake and Deep Analysis and attacked with his Soldiers, taking Zink down to 17 life. Zink tried to make some of his own Soldiers with his second decree but Remie had his third Cunning Wish to fetch Stifle from his sideboard and counter the triggered ability. Zink then had to settle for gaining two life with a Renewed Faith.

On Zink's next end step Remie played his Flash of Insight for eight, trying to find the third of his four Decree of Justice. He found it but Zink played Cunning Wish, copied it with his Mirari and killed off Remie's Wake with his Ray of Revelation, along with Remie's Compulsion. Remie had another Mirari's Wake though and managed to get thirteen more soldiers out of his Decree. Zink, who was at 15 life, was facing down 15 2/2's. He Ray of Revelationed the second Wake, but still the soldiers were about to take him down. During Remie's upkeep the German flashbacked his Moment's Peace. Remie Stifled the Mirari trigger and proceeded to play Mana Leak on Zink's Moment's Peace three times, countering it as Zink only had eight lands untapped. 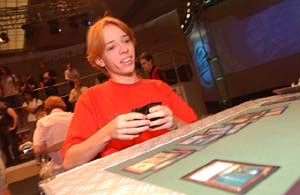 Zink started off with a turn two Compulsion that Remie didn't answer. Zink improved his hand a bit over the course of the first few turns, with both players playing out their lands. His fifth turn Anurid Brushhopper was Mana Leaked but the one he cast next turn resolved. Remie answered that with a Decree of Justice, creating three Soldiers. On his own turn Remie played Deep Analysis, trying to draw into more business spells. Zink decided not to Compulsion anymore, hinting at a very strong hand.

Remie decided to try a Wrath of God, killing off the Brushhopper, as the German wasn't willing to ditch two cards in his hand to save the beast. Call of the Herd was Remie's next spell, but it was Circular Logiced by Zink. A morphed Exalted Angel came out next for Zink but that too fell to a Wrath of God from Remie. Zink tried to Circular Logic that, but Remie had a Stifle for the Madness trigger. Zink played out a Mirari's Wake on his turn which went uncontested. Remie decided to keep his mana free for a Decree of Justice and played nothing on his own turn.

A Deep Analysis was Zink's next spell – commenting it was the first he drew in the match so far. An Exalted Angel was one of the two cards and the German played it. Remie cycled his Decree of Justice, creating eight tokens. The eight brave soldiers attacked next turn and one was blocked by the Angel. The remaining seven took two of his life total as the Angel dealt five damage due to Zink's Wake. The Angel beat down on Remie, taking him down to 9 life. Remie made some more soldiers with another Decree of Justice, but his next attack was met with a Moment's Peace. Zink had a Cunning Wish for another Moment's Peace to ensure that Remie wouldn't kill him with his Soldiers, while his Angel was taking him down.

Remie started off with a Coastal Tower, Krosan Verge and Sungrass Prairie while Zink played out a second turn Compulsion and third turn Brushhopper – not a bad start after taking a mulligan. Remie killed off the Compulsion on his third turn but missed his land drop. Zink started attacking with his Brushhopper but missed his fourth land drop as well. Remie still had his Krosan Verge to sacrifice but didn't draw a land to get to five mana.

The German did draw a Plains on his turn, and got to attack with his Brushhopper again. At the end of Zink's turn Remie cycled his Decree of Justice, creating one token and he drew the land he was looking for. A Krosan Verge came down and Remie chumpblocked with his Soldier next turn. He also Cunning Wished for a Mana Leak, to allow him to win a counter war should they come up. Anurid Brushhopper just attacked again next turn and Zink passed the turn right back to Remie. 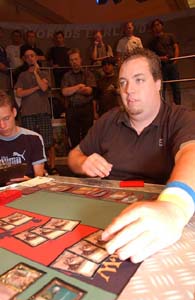 Mirari's Wake was the Dutchman's next spell, but it was countered as Zink had both a Mana Leak and Circular Logic to counter the Wake and Remie's Mana Leak. Zink played and flashbacked Deep Analysis to make sure he could keep the pressure up. Remie tried to put an end to the beating by Zink's Anurid Brushhopper when he cast Wrath of God next turn, but Zink saved it by discarding two land. Remie then cast Call of the Herd. The Hopper took Remie down to 5 life during the next attack phase and was joined by another Brushhopper.

The Dutchman was running out of time and had to settle for cycling a Decree of Justice, creating four Soldiers, one of which chumpblocked a Hopper and one of the other Soldiers joined Remie's Elephant in an attempt to finish off a Brushhopper. Zink decided not to save his Brushhopper, instead playing out a Morph. Wrath of God was Remie's answer, but Zink decided to save his Brushhopper this time around. The Beast went into the Red Zone once again, taking Remie down to two life. The Dutchman Cunning Wished for Moment's Peace next and played out Compulsion on his own turn. Zink's next attack was Moment's Peaced, and Remie refreshed his hand with Deep Analysis on his own turn. Remie tried to Moment's Peace Zink's next attack as well but the German had a Mana Leak, making sure the Brushhopper went all the way.

This time around it was Remie's time to mulligan down to six cards and he kept a two-land hand. He missed out on his third land drop while Zink played out a turn three and four Brushhopper, which were joined by a turn 5 Morphed Exalted Angel. Remie didn't draw an extra land over the course of the next four turns and was taken down in an anticlimactic fourth game.