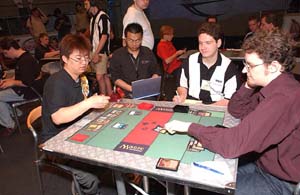 Of the three German players to advance into the single elimination rounds, Peer Kröger is certainly the representative of old-school. He was winning money on the Pro Tour likely before the other two discovered competitive Magic. To his credit are top 8 finishes at Pro Tour: Dallas and on home turf at Pro Tour: Mainz. This is a first Pro Tour top 8 for Okamoto, but he is no rookie with two Grand Prix top 8 finishes. Okamoto has come tantalizingly close to making Pro Tour top 8 twice before. He finished ninth in San Diego and 10th at worlds in Toronto, missing out on tiebreakers both times. This weekend he finally realized his dream. In fact, he was guaranteed a top 8 slot even after conceding in the last round of swiss to Dave Humpherys so the American could also make the top 8. Okamoto is now the fifth Japanese player to make a Pro Tour top 8.

Okamoto is actually at a significant advantage in this case. As per Kröger's own admission the matchup is almost a lost cause. He's got to try to win of course, but smart money is against him.

Kröger won the die roll and made the first play of the match by casting a Burning Wish to get Last Rites. Okamoto tapped out to get a Compulsion into play before the German player would have a chance to discard it from his hand. Kröger cast Last Rites discarding a Swamp, Innocent Blood, and a Visara. He took Okamoto's Mirari's Wake, Cunning Wish and Decree of Justice, leaving him with a land, Wrath of God and Renewed Faith. Knowing that there currently weren't any counterspells in Okamoto's hand, Kröger cast a second Burning Wish to get Haunting Echoes out of his sideboard. If he could catch Okamoto's Wakes and Decrees, he would be up a very quick game.

Okamoto cycled Renewed Faith, untapped, played a land and passed the turn. Kröger drew a fifth land – but it was a Barren Moor. He laid it and passed the turn, allowing Okamoto to cycle twice more before he could untap and finally cast Haunting Echoes. The one turn delay may have cost Kröger the game, because by the time he did cast his trump sorcery, Okamoto had the mana to Cunning Wish for a Circular Logic and cycle it via Compulsion to counter the threat.

Kröger was sitting on a pair of Stitch Together but there were only five cards in his graveyard. He drew a sixth land and actually cast Stitch Together without threshold to get back Visara, since he now had the mana to play it. In the meantime he had to contend with four Soldier tokens generated by a Decree. Okamoto made them bigger with Mirari's Wake. He used Circular Logic to counter Visara and attacked with his Soldiers. Kröger cast Stitch Together reanimating Visara and summoned a Doomed Necromancer. Okamoto had no responses, but at the end of that turn he cycled Decree to create 13 2/2 tokens. Kröger conceded the game in response. 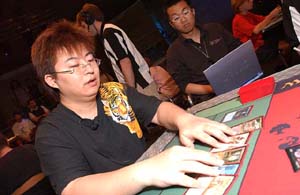 Kröger was off to a solid start as he cast Entomb on turn one putting a Symbiotic Wurm in his graveyard and then cast Burning Wish for Last Rites, holding several of his reanimation targets in hand. Problem is, he failed to play land three for five turns. He actually went on to discard several cards manually. In the meantime, Okamoto had all the time in the world. He used a Cunning Wish to find Krosan Reclamation – holding it as an answer to any potential reanimating of creatures Kröger might attempt. He then played a Mirari's Wake.

Kröger finally got his fourth land and cast Anger. After attacking for two, he sacrificed it to flash back Cabal Therapy. In response, Okamoto made 13 2/2 creatures once more, ending the second game.

Kröger kept an average hand in the third game, but he was able to make it a lot better by playing a turn one Entomb for Undead Gladiator. He summoned a Doomed Necromancer next turn, with no objections from the Japanese player. On his fourth turn, Kröger discarded Symbiotic Wurm to return Gladiator and then tried to activate a Doomed Necromancer – but Okamoto was ready with a Stifle! The 2/2 creature ended up in the bin, without bringing back the Wurm.

Cabal Therapy took out a Decree of Justice, leaving Okamoto with Logic, Mana Leak, Wrath of God and a land. Forced to play around a very good hand, Kröger spent several turns trying to set up his next move. In the meantime, Okamoto got Compulsion into play and was busy digging deeper into his library.

When Kröger finally went for it, he started by casting Cabal Therapy, which Okamoto countered by hard-casting Circular Logic. He could have cycled it, but he only had two Islands in play and that would have left him without any defense against the German's next spell. Okamoto used Cunning Wish to get Krosan Reclamation, buying more time to prevent Kröger from getting a large man into play. Okamoto then laid Wake, doubling his mana supply. 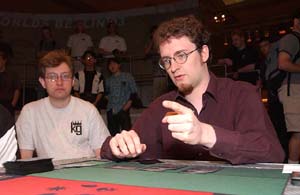 Kröger had to go for it, since he knew that a huge Decree of Justice could not be that far off. He used Stitch Together, targeting a Symbiotic Wurm. When Okamoto cast Krosan Reclamation to shuffle it back into the library, Kröger targeted the Wurm with Doomed Necromancer in response. Once again, Okamoto was ready with a Stifle.

Kröger now had to force his opponent to flash back Krosan Reclamation before he could hope to actually reanimate a creature. He cycled a gladiator for a few turns, allowing Okamoto to burn through his library with Compulsion and cast a second Mirari's Wake.
Kröger cast another Cabal Therapy. In response, Okamoto cycled several times and – apparently unable to find a counterspell - Wished for Flash of Insight. Kröger had to name Decree of Justice, but did not hit. Okamoto revealed a hand of Cunning Wish, Mana Leak, Flash of Insight and a land.

Over the next two turns, Okamoto aggressively searched for a Decree. With access to nearly infinite mana he cast and flashed back his Flash of Insight and a Deep Analysis. He used a Circular Logic to counter a Guiltfeeder and finally flashed back a Krosan Reclamation when Kröger tried to put it back into play.

Kröger drew Burning Wish, cast it to get Buried Alive and used that to put Anger, Guiltfeeder and Arcanis into his graveyard. He would not have the time to animate it. Okamoto showed a Decree of Justice with enough mana untapped to make nineteen 3/3 soldiers, and Kröger conceded in response.

1 Visara the Dreadful 1 Arcanis the Omnipotent