This isn't the Grand Prix I signed up for, as the quarterfinals are filled with aggressive decks. John Balla (aka Nev), playing a deck he did not care to name, although when pressed he went with Bauble.dec. He got the deck at 1am the night before the Grand Prix, and had never played it before. Chris Armbruster was the designer. The stakes are high, as John Balla is playing not only for a lot of money and PT points but is also facing a perm (ban) in EFnet chat room #mtgwacky if he loses. His opponent is far more relaxed, asking questions such as "Can't he be penalized for getting too high a number [on the roll]?" That number was 17, which was then beaten by 18 as Gerhardt told Balla to lighten up and Balla's notorious advisor by the name of John told him he was a fool to have gotten this far for he was now stuck with Pro Tour points. Having won the flip, Balla chose to play and both players kept. 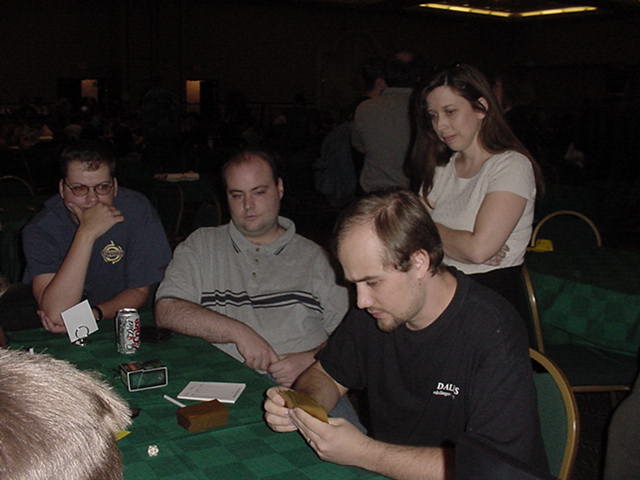 Gerhardt played Taiga and Mogg Fanatic, but Balla had far more to do. He used Urza's Bauble, which resulted in an attempt to hustle him into a die roll on which card he would get to see (so important), then he cast Land Grant to get a Savannah, revealing the Tithe he would use on Gerhardt's second turn to get two more lands to try and cast the Mystic Enforcers in his hand after Gerhard played a Treetop Village. Balla untapped and played the Plateau and Incinerated the Mogg Fanatic. On his third turn Gerhardt attacked with Treetop Village, and Balla responded with Werebear. Balla played a Cursed Scroll and Incinerated the Werebear. Having found his four lands, Balla played out a Mystic Enforcer, and Gerhardt doubled up on Cursed Scrolls. Gerhardt chose not to use Incinerate on the Enforcer, so it hit him for three before the second one died to the Incinerate on end step instead.

Balla sent in the Enforcer after casting Seal of Cleansing to insure threshold, sacrificing the Seal in the combat step to kill off one of the Scrolls, then playing a Wild Mongrel. With nothing else to do, Gerhardt took a 50% shot with the remaining Scroll going after the Wild Mongrel, which succeeded in getting Balla to discard an Armageddon to save it, making the card named on Cursed Scroll irrelevant. A Wasteland took Balla back out of Armageddon range, but the Enforcer was still hitting for six. This time Balla chose not to save the Mongrel, and the Scroll picked out the correct card. But it was then replaced by a 4/4 Werebear. It was all over but Gerhardt's commentary, which at my typing speed I cannot do justice to. You really did have to be there. Balla then decided to get into the act as well. 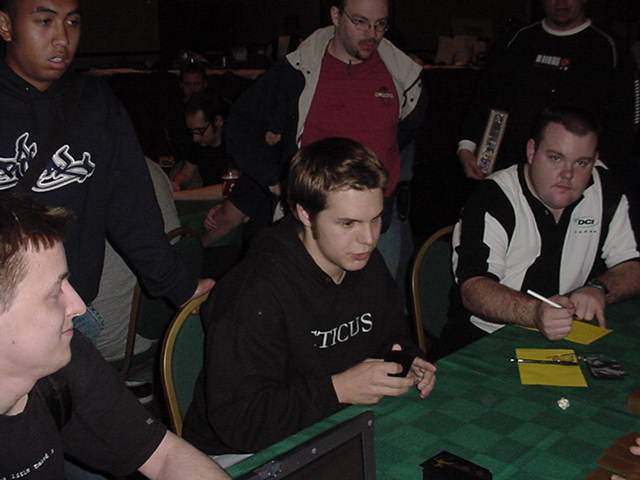 Balla opened game two with two Urza's Baubles, drawing into a self-described bootylicious hand. A River Boa came out and was killed by Incinerate and a land was Wastelanded. Tithe almost removed the second River Boa from the game, but instead just got Plateau, and a Cursed Scroll was Sealed. A Land Grant revealed two Mystic Enforcer and two Wax/Wanes, and as Savannah came out (and then was switched for an unlimited one) the Land Grant became graveyard card number seven. His opponent's lands left a lot to be desired, as neither his Swords to Plowshares nor his Perish was castable. The Mystic Enforcer started going in, backed up by a Treetop Village.

Perish then killed off both the Enforcer and a friendly Boa, but a Wasteland took out the Bayou that let him cast it and a second Enforcer came down. A turn later Gerhardt was down to one lonely Treetop Village in play. Balla was supremely confident, and when Gerhardt finally ordered him to "bring it" that's what happened. His opponent without mana, Balla's online privileges were intact after one of the most enjoyable matches I've watched in a long time although also a rather one sided one.