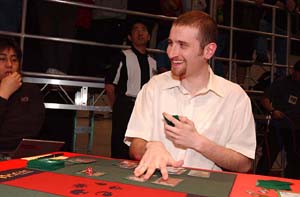 As Jon Finkel and Benjamin Caumes waited for their match to begin, neither player said anything as the shuffled each other's cards. Jon cocked his head when the rest of the feature match area went equally quiet. "You okay, Ben?" he shouted across to Ben Seck—the reason for the sudden drop in chatter.

"What should I talk about?"

"You always find something."

The subject everyone else was talking about were the decks of the two competitors. Jon and Benjamin were the only green drafters at the table and both have amazing G/R decks. Call it the showdown of broken commons. Jon is sporting two Sparksmiths and a Timberwatch Elf while Ben has three copies of the busted elf along with triple Elvish Warrior.

Both players kept their opening hands and Jon kicked things off with a Stonewood Invoker. He got in for two before each player made a turn three morph. Jon got in for another four and made morph number two. Benjamin got in for two with his morph and played the Krosan Vorine that slipped through Jon's fingers during the draft.

Jon attacked with everyone and the Frenchman announced no blocks. Jon unmorphed a Branchsnap Lorian and a Skirk Commando, which killed the bystander Vorine. The score was Jon = 18 and Ben = 6 when a Spitting Gourna joined Ben's team.

Jon sent in the Lorian happy to trade with the Gourna. He was out of land but not plays and he cast a Timberwatch Elf, which was Pinpoint Avalanched during Ben's main phase.
Jon was undaunted and sent in the team and snuck two points of damage through while the Skirk traded with a facedown Gourna. Jon reinforced with an Elvish Warrior and another morph.

Ben was backpedaling and played a Taunting Elf and Krosan Vorine but they were only there to chump block. When nothing stepped up to do anything more than jump in the way Benjamin scooped.

Caumes was clearly annoyed with his deck and sided in a Leery Fogbeast, taking out a Crown of Fury. Not to be outdone, Finkel sided in a Taunting Elf and took out the very same Taunting Elf.

Caumes kept his opener, which consisted of five lands, a Wirewood Herald and a Spitting Gourna and he played the Herald according to schedule. Jon was also keeping a schedule and his second turn appointment was with a Sparksmith. Caumes beat for a point and played a Taunting Elf. Jon cycled for a third land and played a Stonewood Invoker.

Caumes cast Explosive Vegetation and ramped up to six mana. At the end of the turn Finkel shot the Herald and Caumes searched out a Timberwatch Elf. Finkel untapped shot the Taunting Elf, swung for two and made a Thoughtbound Primoc. Caumes made use of all of his mana and played a Spitting Gourna face-up and an Elvish Warrior—Caumes was still holding back the Timberwatch he had fetched earlier. The Gourna elected not to block the Primoc and Finkel—who was stalled on four lands—played a Wirewood Elf. 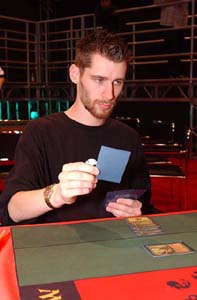 Caumes played a snarling Undorak and swung in with his beastly Gourna and an Elvish Warrior. Finkel threw two of his elves in the way of the Warrior and lost an Invoker. The Primoc kept chipping away and Jon played a morph.

Caumes smashed into the red zone with his Undorak and the Gourna and Jon put his morph in the way of the snarling beast. Eagerly—hoping it was a chump block—Caumes asked, "Damage?" But Finkel had the Primal Boost. Frowning, Caumes pumped his Gourna twice to get in some extra damage and the Undorak died. Caumes finally played his Timberwatch Elf and a land leaving himself with an empty hand.

Finkel got in for four more damage and then killed the Gourna with a Solar Blast and the Sparksmith. Another Elvish Warrior joined Finkel's team. Caumes could only shake his head as he drew and played a morph. When Finkel attacked, Caumes put his Timberwatch in front of the morph and an unmorphed Gourna in front of the Primoc. Finkel revealed a Rockshard Elemental and first striked the 4/5 Timberwatch to death with the help of the Sparksmith.

Caumes played nothing on the next turn but Finkel wasn't taking any chances and he Waved the Gourna and swung in for lethal damage.

The game might have gone differently if Caumes hadn't thought Finkel was sitting on another goblin in hand but the lone American player in the Top 8 was only bluffing.

Caumes could only seethe at his deck as he reconsidered his sideboard. He saved his meanest look for the Solar Blast that was sticking to the bottom of his deck. He decided to side out the Explosive Vegetation and bring the Crown of Fury back in.

A quick glance around the peanut gallery would reveal a host of the world's best players hanging on the rail. This included Bob Maher Jr. and Carlos Romao but before anyone else was the best there was Jon Finkel and the crowd was rippling with excitement. If he could get past this deck it seemed as if the tournament was his for the taking.

Both players kept their draws and Caumes played a Wellwisher, which Finkel reluctantly answered with a Stonewood Invoker. Caumes played a Timberwatch Elf and it started looking like time to put away the brooms—no sweeps here folks! Finkel appeared unconcerned and played out a morph after getting in for two with his Invoker—Caumes gained three.

The Frenchman followed up with a Snarling Undorak and Finkel made another morph with no possible attack—Caumes went up to 24. Caumes sent his beast into the red zone but he was out of land. Finkel sent two morphs and a Stonewood Invoker across the table but Caumes didn't feel like tapping his Timberwatch and took six. He would go back to 21 at the end of the turn but not before having to stare at Finkel's 7/7 Stag Beetle.

Still out of land Caumes played a Vorine and sent the turn back with no attackers. Finkel sent in the Stag Beetle which bust through unopposed and added a Needleshot Gourna to the team. Despite all of Jon's beats the score was tied 17-17 at the end of the turn.

Caumes was desperate for land and his deck offered none—he was still stuck on four. He ate the morph with his Vorine and saved it with his Undorak. Finkel kept the pressure on and sent everyone over the table. When Caumes tried to kill a Needleshot by pumping his Undorak with Timberwatch Elf, Jon killed the elf in response and the two beasts bounced. When the dust settled, Caumes was at 11 and Finkel played an Elvish Warrior.

Finkel kept the beats coming and Caumes clung to life thanks to the Wellwisher. Finally Caumes was able to get to a point where he had eleven points of attackers and a Taunting Elf. It is unclear if he was toying with Jon or just did not see the kill at first. He was holding a Solar Blast but knocked on his deck and groaned at his draw. When he killed Jon, the American was PO'd. "I got slow rolled!" 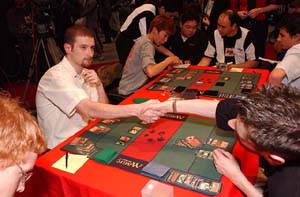 Finkel opened with a Stonewood Invoker and Caumes played a Herald. Jon's third land came into play tapped—a Forgotten Cave. Leery Fogbeast came down on the French side of the battle. Jon did not have a fourth land but he did have Timberwatch Elf. Caumes reinforced with a 4/4 Skirk Outrider—courtesy of Leery Fogbeast.

Jon's fourth land enabled a Goblin Clearcutter, which allowed Finkel to explode into an Elvish Warrior and a 7/7 Stag Beetle on the next turn and a Brontotherium two turns later. Caumes was reeling under the assault and when they stopped the game to swing the camera over Caumes laughed nervously, "This doesn't seem good!"