"Finkel claiming that he was up 31-2 in playtesting tells me his playtest partners did not sideboard correctly." Justin Gary's teammate, Zvi Mowshowitz was explaining why the YMGer's match up was not the 'gimme' for Finkel that everyone—Finkel included—seemed to think it was. "Sure it's advantage Jon but 31-2? Something's not right there!" 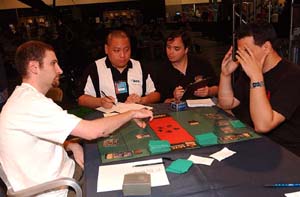 This was not the first time that Gary and Finkel have faced off in the Top 8 at US Nationals. In 1997 Justin was part of the upstart team of 'randoms' that eliminated Jon Finkel, Mario Robania, Nate Clark, and Casey McCarrell. While two of the 'randoms' --Kyle Bigios and Jeff Butz—have not been a part of the contemporary Magic power structure, Justin and Bob Maher, Jr. have gone on to do pretty well for themselves.

The fate of this year's US National team seemed to rest in the deck match-ups. Many pundits—Kai Budde included—expected most of the star power to go dim in the quarters. Jon looked at the next-door feature match between Neil Reeves and Jordan Berkowitz could only laugh as he went through the permutations, "What's great is that I am rooting for Neil and Jordan is rooting for me." Never one to resist a dig, "I'm rooting for Neil's deck anyway."

Jon ducked as the crane camera for the video commentary swung overhead, "That camera is going to drop on my head!"

"Apparently that's the only way I'm winning this," laughed Justin who normally works as a spotter on the occasions he fails to Top 8. "I'm tight with the camera crew—that's my edge!"

Neither player mulliganed and Jon led off with a Nantuko Shade, which drew an Edict. Withered Wretch came down next and when Justin Duressed his opponent he saw a Graveborn Muse and a Smother. Justin's Edict was removed from the bin EOT

Jon played the Muse, "Let's get that Mutilate, c'mon!"

"Ask and ye shall receive..." and Justin cleared the board.

The 2000 National Champ had another Wretch and removed both of Justin's cards before passing back the turn. The 1997 Champ just shrugged and played Mirari. Jon snuck in for two points and Justin Diabolic Tutored for Cabal Coffers and played it. Jon seemed visibly disturbed by his lack of action and got another couple of points in. A Duressed revealed that Jon was holding only a Faceless Butcher. Justin's deck was starting to kick into gear and he started the Tutor Mirari chain getting another Tutor and a Riptide Replicator.

Another attack didn't even drop Justin to the halfway mark—he fell to twelve—and things were looking mighty grim for Jon when Visara hit the table. He cast Cabal Therapy on his next turn but was disheartened when his Withered Wretch was Smothered in response. Jon named Corrupt—a rare mistake for Johnny Magic, he should have named Diabolic Tutor to break the chain—and saw the Tutor, Riptide Replicator and Mutilate. He played the Butcher and sacrificed it to take away the Replicator.

Justin got in for five with his Gorgon and searched for another Tutor and a Corrupt. Jon drew nothing useful and conceded an attack step and Corrupt later.

When Justin mulliganed, Jon gave the Team Deadguy fist-pump, first popularized by Chris Pikula. Justin deliberately pile shuffled his deck, "I got new sleeves just for this match but they're sticking..." 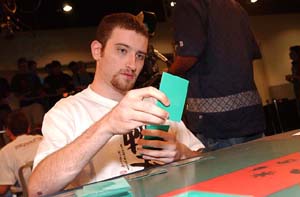 "Forgive me the customary whining about a mulligan."

"Customary? I don't know if it's customary. It's okay to be upset about the mulligan... But to whine and blame it on the sleeves?"

Jon led off with a Mesmeric Fiend and saw two Smothers, a Mutilate and an Undead Gladiator. He took the Mutilate—for the time being. Jon got in for a point and played a Rotlung Reanimator. Justin had no turn three play but Jon had no turn four land drop. When he attacked he drew out a Smother on the Rotlung. He played a Withered Wretch and wanted to make sure he could remove a Gladiator—Justin had cycled last turn—in response to attempting to return it from the bin.

"Worry not," Justin had the Mutilate and Jon removed the Gladiator in response. "Done?"

Jon had a second Fiend and saw almost an almost identical hand to the one he saw on turn two—two Smothers, Mutilate and a Nantuko Shade. Justin Smothered the Fiend and played a Nantuko Shade of his own. When Jon played a fourth land, Justin cheered him on, "There you go, right back in it!" Jon played a Graveborn Muse.

Justin's Shade got in for six and a whiffed Cabal Therapy revealed Jon was holding two Braids and Nantuko Shade. The Shade was promptly sacrificed to eat the two Braids. Jon fell to thirteen on his upkeep but got an extra card and Justin decided to Mutilate before things got out of hand. Jon cast Duress and took Edict over Smother and played another Graveborn Muse. Justin was impressed, "That's two good draws in a row."

"That's what happens when you draw two cards a turn."

"But they're all good cards," complained Justin.

"That's what happens when you sideboard."

Justin was out of gas and Jon made his Nantuko Shade. Justin played an Undead Gladiator and Jon attacked into it. Justin had no blocks and when Jon pumped once he Smothered the insect. Jon Corrupted him for seven and the life totals swung to Jon at eighteen and Justin at five. Justin's Duress saw another Graveborn Muse waiting in the wings. Justin could not keep up with two cards a turn and packed.

While Jon went to use the facilities, Justin confided that he felt more confident on the match-up than he let on in front of Jon. "I'm counting on Jon to have sideboarded incorrectly. I have to hope he didn't leave the Smothers in against my Shades. If he was here right now I would be making a production of sideboarding but he's not so..."

There was a brief delay as they waited for the cameras to swing in their direction, which seemed to invigorate Justin who goofed around with Jon "The show is back on. Now I gotta win for my audience and my fans back home."

Jon did not miss a beat, "Both of them?"

Justin laughed off the beat, "Yup—Mom and Dad!"

Jon leaned in with a sly grin and whispered, "You know, Justin, secretly they are rooting for me."

"Everyone roots for you—you're Jonny Magic."

Justin led off with Duress and took a Duress over Edict and Cabal Therapy—he could not take the Braids. Jon held off on a blind Therapy, perhaps hoping for a chance to rip a creature or—even better—another Duress. He went in blind on turn two and named Diabolic Tutor and was successful. He also saw a fistful of lands and an Undead Gladiator. Justin cycled and picked up Gladiator. Nothing was happening on either side and Justin played the barbarian on the next turn. Jon played a Graveborn Muse, which stepped out of the way for an attack by the Gladiator. Justin played Cabal Coffers and Nantuko Shade.

Jon edicted and it drew the Gladiator. He played a Withered Wretch and removed the card from the game. Justin Smothered the zombie EOT. Justin was able to send a giant Shade into the red zone and Jon did not block and Justin pummeled him for ten life. Jon went to five on the next turn from his Muse and Duressed a Mutilate out of Justin's hand and played a Braids.

When Braids chumped the insect, Justin dispatched the Muse with an Edict. Jon ripped the sixth Swamp and Corrupted the Shade to go back to eleven. Jon played a Shade a turn later but all it did was remove a Chainer's Edict from Justin's bin. 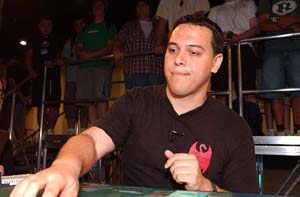 Justin's Duress took a Cabal Therapy and on the next turn he had enough mana to tutor for and play a Riptide Replicator making 2/2 black chickens. Jon Corrupted his opponent for eight and Justin started hatching his birds.

When Justin attacked with his chicken he seemed inordinately pleased, "How many times will I get to say "chicken" during the course of the Top 8." Jon Mind Sludged Justin for a pair of meaningless cards and braced for a chicken assault.

Justin nodded as he peeked at his draw, "Slightly better than a chicken..."—he played an off the top Visara. Jon played a Muse and Braids but he could not deal with the massing chicken Onslaught, much less the Gorgon.

As advertised, Justin made a show of shifting the same card in and out of his sideboard but Jon seemed to pay him no mind. Neither player mulliganed and after turn two passed both players had Nantuko Shades. Jon got in for the first damage with a pumped Shade and played a Withered Wretch. Justin trumped him with another Shade. Jon whiffed on a Therapy and saw a hand with another Shade, Edict, Visara and a Replicator. Jon's Wretch traded with an insect in battle and he played another but missed his fourth land drop. Justin flew in for two points and played his third Shade, which traded when Jon had his next attack step.

Justin had two Edicts to decimate Jon's troops and he swung in for three. Jon took the Visara with a Cabal Therapy and played a Braids, which ate one of Justin's Swamps and then fell to an insect. Jon continued to strip his opponent's hand but could not find removal for the Shade—alas, no Smothers?

After Justin attacked for a nearly lethal eight, Jon was left with one draw step to find something that wasn't there.

After upsetting Jon in 1997 to the strong disappointment of the pro-Finkel crowd, the sudden burst of applause today, as the two adversaries shook hands must have felt like it was long overdue to the former—and possibly once again—National Champion.