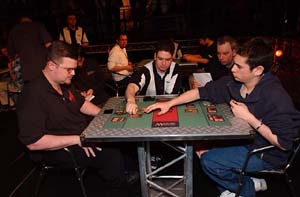 Darwin Kastle is almost twice as old as Jordan Berkowitz—31 to 16. The YMG'er also has quite a few inches and pounds on the former JSS star, and about 8 times as many Pro Tour Sunday appearances. It is definitely a match up between old blood and new.

Berkowitz and his red/green Beasts deck (designed by fellow East-Coaster Roger Sorino) played against Kastle's Dragon deck in the Swiss portion of this event, and Kastle swept 2-0. Further playtesting by both players before the Top 8 have shown Kastle's win to be an anomaly, with Berkowitz being the clear-cut favorite.

Berkowitz run the roll and kept his opening hand. Kastle peeked at his first seven and sighed.

Kastle shuffled his deck again and took a fresh six.

Kastle: "If it'll make you happy, I'll sigh after every draw. Did they prepare you for my mind games? 'Ooh, Darwin's gonna get in your head...'"
Berkowitz: "There'll be no getting in my head."

I'll cut to the chase. Berkowitz played a 6/6 Canopy Crawler on turn three with a Contested Cliffs in play. That alone was enough to defeat Kastle, whose only spell was a lone Wirewood Elf. Quite the draw.

Kastle sided in his Shocks and Insurrections; Berkowitz faked like he was siding, but actually changed nothing. 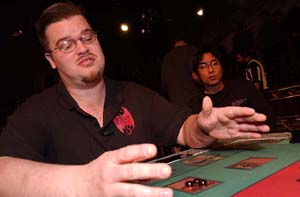 Game 2 was not any better for Kastle. He played a Wirewood Elf that was eventually Shocked, and a face-down Imperial Hellkite as a chump blocker. That's it. Berkowitz, on the other hand, played a Wirewood Elf, accelerating to a turn-3 4/4 Canopy Crawler, then a Tephraderm, then a Ravenous Baloth. Game.

Kastle's deck had better start coughing up some Dragons if he's going to make a comeback.

As they shuffled for Game 3, Kastle sounded off on how the games were going.

Neither player had a Wirewood Elf in Game 3, so the early turns were uneventful. Kastle made the first play with a turn-4 Goblin Clearcutter. Knowing that the 3/3 was capable of helping Darwin play his Dragons a lot earlier, Berkowitz immediately burned two Shocks on it.

Jordan played a Ravenous Baloth on his fourth turn, then Kastle played another Clearcutter. Jordan couldn't do anything about this one, so he attacked for four, played a Tephraderm, and resigned himself to letting Darwin play something enormous.

Darwin did as expected an played out a Kilnmouth Dragon, amplified with Rorix Bladewing. Jordan added another Tephraderm to the table and held back.

Darwin sacrificed another land to the Clearcutter and played the bomb: Insurrection. Jordan was in a pinch. He had to sacrifice the Baloth, and after doing the math he realized he had to sacrifice a Tephraderm as well. Darwin responded by shooting him for three with the Kilnmouth, then untapped and gained control of everything and attacked for 15. Jordan had no answer, and Darwin added Rorix to the table for the final blow. 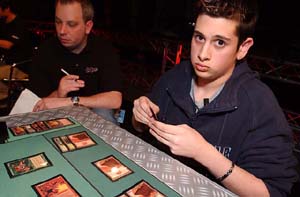 Berkowitz kept a five-land hand in game 4, but it worked out well for him. Both players had Wirewood Elves on turn 2, but Kastle had a Shock. Berkowitz played a 4/4 Crawler on turn 4, amplified with two Krosan Tuskers. Darwin had no play.

Jordan played a Cliffs and killed Darwin's Elf, then swung in. Darwin had only an Explosive Vegetation to play.

Jordan played out an Avarax and got in for nine damage, putting Darwin to a measly three life. Finally, with enough mana, Darwin put out an 8/8 Kilnmouth but it was too little too late.

Jordan dropped a Tephraderm and traded it with the Dragon via the Cliffs, then swung in for the kill.

Kastle's deck, which often looked so explosive during the Swiss, looked rather pathetic here in the quarterfinals. Berkowitz's deck, with its "normal" mana curve and nice synergy, moves on to face Tomi Walamies in the semis.