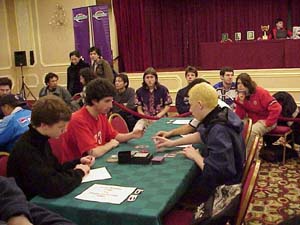 In this Top 8 match, we found the 2000 Chile National Champion, Juan Reutter against the almost new but very experienced player from Argentina, Matias Gabrenja. They both, in they first Grand Prix top-8 were very nervous. They rolled the die and Matias won, choosing to start.

Matias Opened the game with a Blurred Mongoose while Juan was trying to set up his mana base when he played an Opt who found a Mountain. Between Juan who's mana screw didn't let him play properly and Matias who was just playing lands and Urza's Rage to Juan's head.

Reutter tried to get some mana fuel by playing a Fact or Fiction but he only found an Opt and two Fire/Ice while leaving an Evasive Action and a third Fire/Ice. It was then that Reutter drew Goblin Trenches, the almost only victory condition as well as a very good card against aggressive decks but he couldn't jut play it without any counter backup. So he played an Ice on Matias Yavimaya Coast to leave him with only one blue mana forbidding him to play his Mystic Snakes but Matias Played a Shivan Reef. Still with four lands he plays an Opt to fetch for one more but he only finds an Urza's Rage which he discards at the end of the turn. Matias hits for two with his Mongoose (the only creature in the whole game) and a Urza's Rage to Juan leaving him in one life and not being able to play his Goblin Trenches because his only white mana resource was a Battlefield Forge

In the sideboard, Reutter changed his deck into a more aggressive deck by adding three Lightning Angels and four Galina's Knight and the traditional sideboard: four Gainsay and two Disrupt. Matias, knowing that, put in two Flametongue Kavus and three Jungle Barrier.

The game started with Juan taking two mulligans which gave him an opening hand of four lands and an Absorb. The first one to play a spell was Matias with a Kavu Titan. In his following turn, he played another one but Reutter used his Absorb on it. In his turn he played Fact or Fiction to avoid Matias counterspells and he gets a Disrupt, an Exclude and a Lightning Angel. Matias, even if Juan was tapped, didn't play anything and just kept hitting with his Kavu Titan. Then, Gabrenja, at the end of Juan's turn, played a Fact or Fiction which got countered by two Disrupts. Matias, after playing his sixth mana, played an Gaea's Skyfolk leaving him four mana open for his Mystic Snake. Juan plays a Galina's Knight which Matias lets resolve to be able to play his Fact or Fiction but it got Absorbed. Matias attacked and the Galina's Knight traded for the Kavu Titan. He plays his second Gaea's Skyfolk. Next turn, when Matias attacks, Reutter plays a Fire (Fire/Ice) on one of the Skyfolk. The following turn, Juan returned Matias's Skyfolk with a Repulse. Now , Juan tries to take the offense playing a Lightning Angel; Gabrenja plays a Mystic Snake and Juan tries to Exclude it but another Mystic Snake finishes the job. Matias attacks with his two Snakes and play a Blurred Mongoose. Juan plays a second Lightning Angel and a Galina's Knight but an Ice from Matias tapping the Angel makes Reutter concede.