Quarterfinals: Jushis Juiced, But Is It Enough? Neil Reeves vs. Josh Ravitz 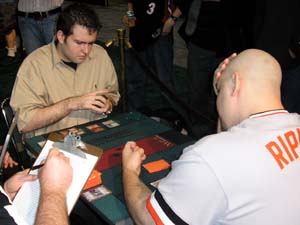 Ravitz, center, and Reeves faced off with an invite to Worlds on the line.

I'm not exactly sure what Neil Reeves has been doing since last year's Nationals but it may have something to do with poker. Neil Reeves came within one match of reaching the Top 8 of last year's U.S. Nationals. The year before that, he was eliminated in the Top 8 along with Jon Finkel and Brian Kibler.

Neil was playing a Monoblue Control deck that was fueled by the card drawing of Jushi Apprentice and featured a vast arsenal of countermagic. While many people think of Neil as a Limited master, his Magic roots go back to Browse Digger Control. While everyone else was trading their left Nut Collector for Balduvian Hordes, Neil was acquiring a playset of Thawing Glaciers and Browses…cards he still owns today. There are actually not that many players as comfortable sitting behind 12 lands with a handful of control.

His opponent Josh Ravitz was not as optimistic about his chances. Of course, Josh is not exactly the optimistic sort. There was some question about Josh's allegiance to the TOGIT/Seven Kings crowd yesterday but Osyp assured me that Josh was still on the team.

"He didn't do the split with us but he is still a King," Osyp said.

Whatever way the loyalties lie, Josh was one of four players in the Top 8 with a TOGIT pedigree.

Like Neil, Josh was playing the type of deck he has always been most comfortable with - a Mike Flores deck. He was playing a true Flores Red deck which was tweaked to make room for sideboard Cranial Extractions and Boseijus - which could be a problem for Neil. Analysts have pointed to the Twincasts in Neil's board as the countermeasure but Flores himself points out that you can just Extract the Twincasts. Flores made his list available to the whole TOGIT nation but Osyp rejected it because he felt it could not win the exact matchup which Josh was facing Sunday morning.

Neil's first play was a Jushi Apprentice which was promptly Magma Jetted, which came as no surprise to Neil.

"Every time…they never don't have it," clucked Neil. "Last night during 50 playtest games we must have had turn-two Jushi 40 times and he never lived once."

Josh did not exactly get off the fastest of starts and had to content himself with nibbling away with a pair of Blinkmoth Nexus. He attempted Molten Rain on turn five but it was met with Mana Leak. Neil played Stalking Stones and Josh attempted another Molten Rain but it was foiled by a Boomerang.

Neil replayed the Stones and took two more from the Blinkmoths. Neil activated his Stones end of turn and Josh took that opportunity to Magma Jet JT Money.

Neil cracked back for three with his Stones. The life race was 12 to 17 in Josh's favor but that was all the damage he would get in for the rest of the game. Neil Rewound his Solemn Simulacrum and activated another Stones. Neil attacked Josh down to 11 and paid one mana to summon Spire Golem. He peeked over at the judge's score sheet and smiled, "I'm winning."

Josh put a Nexus in the way of one Stalking Stone and tried to kill it by pumping twice but Neil allowed damage to stack and Swing Boomeranged his Stones and replayed it -Josh was at 6.

Neil Condescended an Arc-Slogger and took Josh to one with his next attack. Josh Topped feverishly for the last piece of the puzzle. He had Magma Jet, Shrapnel Blast, and Pulse of the Forge which left him one short of killing Neil. He needed one more mana to be able to get in with his Nexus for the final point. .

Josh mulliganed his opening hand but kept the next set of six, which included a first-turn Divining Top. Neil seemed fine with his hand and made the oh-so-surprising play of "Island, go." 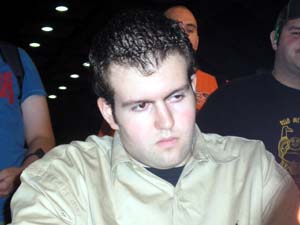 Josh's turn-two play was Wayfarer's Bauble while Neil had the Jushi Apprentice, which could only mean one thing. Josh shrugged and announced, "Upkeep," as he Magma Jetted the Jushi. Neil slumped and tossed the card out of the Feature Match pit to Jeroen Remie.

Josh looked at his top three and shuffled with his Bauble - he didn't like what he saw either time. He attempted Cranial Extraction and Neil peered at him and thought for a while.

"Cards?" Neil sat with his head in his hands staring at the table trying to figure out his play. Finally he cast Twincast in a sideboard-card collision. Neil named Beacon of Destruction. He saw the one card in hand was Fireball and shook with frustration. With the Extraction still on the stack, Neil decided to Mana Leak the Extraction.

Josh grumbled, "I am going to attack you for one."

Josh looked for answers other than lands from his deck and threw Magma Jet at Neil end of turn but Reeves wanted to scry instead and Condescended it.

"You keep them both?" sighed Josh as Neil chose not push either card to the bottom.

"I did switch the order," consoled Reeves who played another doomed Jushi on his turn. Josh untapped to Fireball it and when Neil's lands were tapped for rewind he responded by flipping the Top and Magma Jetting the wizard.

Neil shook his head at the procession of toasty wizards over his last 52 games in the matchup and had to make do with Triskelion. He rewound Josh's Fireball but a turn later he merely chose to Twincast a Shrapnel Blast aimed at the Trike and throw the counters at his opponent to boot - Josh dropped to 4.

There were nothing but lands and Wayfarer's Baubles waiting on top of his deck and Neil found himself one game away from being qualified for Worlds.

Josh led off with Bauble and Neil had Jushi Apprentice. He picked up the card and gestured with it toward his graveyard. 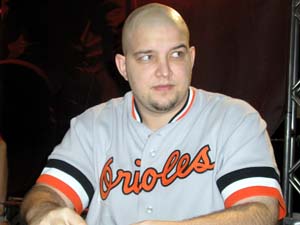 Reeves interacted with the crowd for much of the match.

"Did you know that Jushi Apprentice has flight?" Neil asked Randy as he was about to fling it into the crowd. He thought better of it and tried to put it in Randy's pants. "Here put this in your pocket. I mean…if he would Fireball it, I would be fine with that."

Josh's mana included Boseiju, Who Shelters All which spelled all kinds of trouble for Neil, who merely had Vedalken Shackles - which would not find a creature remaining in Josh's deck to steal. "How's that taste, suckah?"

Josh resolved Cranial Extraction for Spire Golem. "I got plenty of creatures," clucked Neil and showed him Uyo, Silent Prophet (bad news indeed for Josh) and Triskelion along with Hinder and two lands.

Josh attempted to Magma Jet on his next upkeep and drew a Hinder from Neil. Neil played Jushi Apprentice and Josh mana burned for five during Reeves' second mainphase. Neil's Apprentice lived through Josh's next turn only to attack for one - Neil played the Uyo. Josh mana burned again and used Boseiju to cast Pulse of the Forge and went to eleven. He was able to Pulse twice but he could not kill Neil on his next turn. If Neil got to untap with Uyo, the game was over and Josh conceded.

Ironically the one game the Jushi lived, all it did was attack for one point of damage.