Ah, the final eight. After fourteen rounds of swiss in different formats, the best of Europe gain the right to fight it out for the ultimate glory. These guys have proved their worth...but who on earth are they? 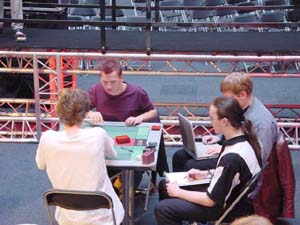 Thomas is from France, and has been playing since Antiquities. He is a regular teammate of Pierre Malherbaud in team events since 1999, and they finished seventh in Boston this season with Karim Aouidad. This is apparently not the finest thing with the team, though, as Pierre told me very happily that they always make it to the semifinals of the French team nationals (?). Jussi is a Finn (Yeah!), and started playing during Revised. His accomplishments include top 64 at Pro Tour Nice and top 16 at Grand Prix Oslo 2001. He also sings in the church boy choir Cantores Minores, which is quite popular in Japan.

Thomas went 5-1-1 in standard, while Jussi achieved a 7-0 record. Of note is the fact that his Zombie deck beat four red-green opponents.

But let's get on with the show. Thomas took a lightning fast mulligan with his six spells and Coffers. The guys chatted a bit about their testing for this match, which they pretty much skipped in order to get some sleep. Thomas was happy with the second hand, and started the game. The first play is a Wretch by Jussi, and Thomas just cycles a Gladiator. Wretch sends and Jussi just drops a third land. Another Gladiator is cycled, but Jussi does not remove it immediately. This enables Thomas to cast Scrying for two in his end step in response to the Wretch. Jussi drops a Grotto and a Muse. Thomas Duresses Jussi seeing four Swamps and a Smother. Things are looking Grim for Salovaara after a Mutilate, but Grotto returns the Wretch into play. Thomas Plays Coffers, Innocent Blood and Echoes. It catches both Wretch and Muse as Jussi used his remaining mana to remove the Mutilate on his own turn.

Thomas: "I don't find the Smothers."
Jussi: "You should get glasses."

Jussi is out of steam and just plays a land. After a few rounds of nothing, Jussi plays a Shade but gets it Edicted. A Fiend enters play and Jussi Smothers it in response to the effect, removing a Mutilate permanently and seeing a Swamp. Thomas starts to whistle so Jussi Corrupts him for eight. Thomas decides to Corrupt back, putting his life total to 14 versus Jussi's 20. Thomas is in total control of the game as he draws a Tutor and casts Scrying for five. Two Coffers gives him a yet another reason to whistle, as he drops a Gladiator and Abomination. Jussi needs to topdeck his remaining Corrupt in order to pull this one out. The Finn Therapies naming Corrupt, but Thomas has two Smothers in hand. Thomas just attacks with his creatures, bringing his opponent to 12. Jussi has no Corrupt but Therapies away the Smothers in order to drop a Shade. Too bad he is at four and opponent flashbacks the Edict.

Jussi comments afterwards that his using of the Wretch was less optimal than the English house heating system.

Thomas finds it funny that Jussi got flooded so much, as in his testing group the Zombie deck required more than 24 lands. 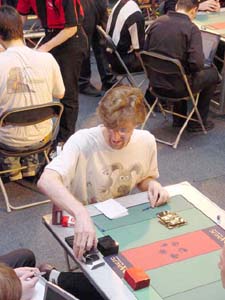 There are many different ways for both players to sideboard. Thomas can simply take in all eight creatures and two Plagues, or opt for the Persecutes instead. Jussi brings in Sludges and Edicts, but whether he should have Echoes or some additional Smother depends on how Thomas boards. But what happened was the following:

After some thinking, Jussi opts to go for the six card hand. No mulligan for Thomas, and Jussi just plays a Swamp and no discard. Second turn Wretch gets Smothered immediately. Jussi casts Duress seeing Abomination, Plague, Tutor, Mutilate, Corrupt, and Innocent Blood, taking the Blood. Thomas cycles the Abomination during his turn. Jussi fails to find a fourth land and just passes the turn. Thomas gets his fourth land but casts Plague for Zombies instead of Tutoring. Jussi plays a second Grotto and a Muse. Thomas plays land number five and drops a second Plague. Jussi beats for one and casts Echoes for Blood, Smother and Abomination. Thomas Tutors during his turn instead of Mutilating the Muse. Jussi hits for one and drops a Shade. Thomas Mutilates the guys but Grotto brings the muse back. It is taken care of with a third Plague.

Jussi does nothing, and Thomas Corrupts him for six. Another Echoes gets Tutor, Mutilate and Corrupt from Thomas. As a response, he starts talking to the audience in French. Thomas draws his card and says "Moo!". After a while of talking about how he drew an Echoes, he instead Corrupts Jussi for six putting him to six. Therapy gets the Echoes revealing Edict and Mutilate. What just happened here? Thomas explains the incident by the fact that he never lies. Neither one does anything for a while, but then Jussi takes the Muse back from the grave as an insurance against Echoes.

Shade enters play just to get Edicted. Jussi plays Fiend seeing a hand of Coffers, Edict, Mutilate and Scrying, taking the card drawer. Thomas plays Duress taking a Corrupt and seeing Edict with some Zombies. Fiend starts hitting him, down to 27 in three attack steps I might add. Therapy gets a Mutilate. 26, 25, 24, 23...These are the worst beats ever. Thomas start singing. He then Edicts both players and cast Scrying for seven. "Scry, baby, scry!" Why did I get this match?

Jussi: "Do you know that they call you the mad Frenchman?"
Thomas: "Who they?"
Jussi: "Everyone."

Persecute takes Jussi's hand, and an Echoes follows. Jussi Grottos the Muse and Rotlung in order to avoid decking. This is not enough to deck mister Salovaara, and Thomas concedes.

The next time Thomas topdecks an Echoes, he might not stand up and tell the judge, audience, and opponent about it before playing a different card and passing the turn. But on the other hand, it could be a nice bluff.

Both players seem to be playing the Echoes game with these one-ofs. No mulligans, and Jussi Therapies for Tutor. Thomas has 2 Swamps, Coffers, Shade, Visara, and Bridge in hand. Thomas drops the Shade. Jussi plays Duress taking Bridge, and then another Therapy to take a freshly drawn Scrying. Shade hits for five before getting Edicted. Jussi casts Rotlung on his fourth turn, then flashbacks a Therapy to take Visara, seeing Edict and Coffers. Zombie token is Edicted. Jussi empties his hand to play Grotto, Shade, and Wretch.

He then passes the turn without removing the Edict. Visara is removed in response to the flashbacked Edict, and then Jussi sacrifices the Wretch. Jussi returns the Rotlung and hits for two. Thomas Tutors and taps out to play Abomination. Shade hits for two, bringing Thomas to fourteen and then a new Rotlung joins the battlefield. Duress hits Thomas's Duress and the Frenchman is only drawing lands. Jussi returns the Wretch and plays it, finally removing cards from the grave immediately. Thomas is all out of action. Jussi hits with the Clerics bringing Thomas to ten and netting two Zombies. Thomas plays Echoes, but Grotto saves the Rotlung, and only Edicts are taken. Jussi Therapies for Smother, seeing an Edict, and then hits Thomas to two. Zombie-victory is just a matter of time, so Thomas prefers to concede. 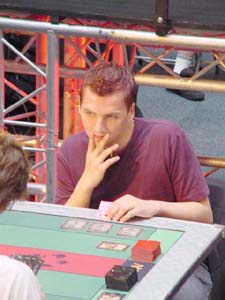 Thomas was unhappy with how his opening hand got discarded, and Jussi says that he drew no early discard in the first two games. Then both players start singing and discussing David Bowie.

No mulligans. The first play is a Duress by Jussi. Persecute hits the bench leaving Tutor, Coffers and two Swamps. Thomas draws Duress and takes Edict, leaving 2 Muse, Swamp, Wretch and Rotlung. The cleric hits play on turn two. No third land for Jussi but he gets to Duress the Tutor seeing only lands with it. Jussi just keeps hitting and removing cards, and Thomas drops Abomination. Jussi draws his card, smiles, and casts Edict. Thomas has nothing and Jussi draws the third land for Rotlung. Beatdown takes Thomas to eight and a second Rotlung follows. Thomas shows four lands, says "Good game." and its all over.

Raphael Levy shows up and tells Jussi that he could have secured his win in the second game. After Echoes number two, Jussi could have just stopped drawing cards with Grotto and played a Zombie each turn as it dies to Plague. This would have meant that Persecute-Echoes would never get enough different cards from Jussi's deck. In my opinion that is quite the neat trick.