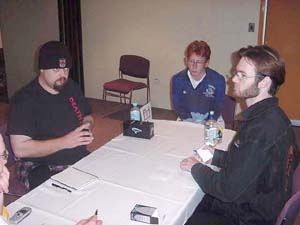 The Quarterfinals match between the fourth and fifth place was a titanic clash of Australian Magic talent. Nathan Russell has qualified for every single Oz Nats (team Oz '95 & '97, APAC Champion '98) was playing in his fourth top 8. Justin West came top 16 in Australian Nationals in 1999, top 8 in 2000, top 64 in APACs 2000, and recently finished above both Jon Finkel and Kai Budde at Pro Tour San Diego. Justin West, locally known as "Bomber" for his near-religious devotion to the Bombers football club, was playing an aggressive Blcak control deck he dubbed "Ninja". Nathan was playing a Red/Green/Blue madness deck known as #mise.dec. Trying to decide who will play or draw, when Nathan was asked if he wanted to arm wrestle for the decision, he replied "Are you mad? Look, he's wearing a beanie!", a more conventional method of coin-flipping was utilised, and Nathan won, and elected to play.

Nathan drops a forest and casts a Basking Rootwalla, West reponds with a swamp and a duress, discarding a circular logic, chosen over a Roar of the Wurm and Violent Eruption. Nathan attacks and casts and Aquamoeba. Bomber's second turn sees him cast Duress twice, relieving Nthan of both is Roar and the Eruption. Nathan decides to continue swinging at Justin, attaking with his boys. West responds with a Chainer's Edict in his own turn. Nathan uses the discarded Roar and gains himself a 6/6 beastie, but Bomber's God-like hand allows him to cast two Edicts next turn, leaving his opponent with nothing but land. A few draw/go turns later, Bomber drops a Phyrexian Rager, followed by a mesmeric fiend which captures another Violent Eruption. Nathan continues to draw and lay land while Justin swings for three points a turn with his critters. Nathan rallies on 10 life when he draws a Fire/Ice, which kills the Fiend and returns the Eruption to where it is sorely needed. One more hit from the Rager before it is subjected to a Violent Eruption, then West's attempted summoning of Braids was prevented by a timely Circular Logic. West summons one of his three main deck Shambling Swarms, and Russell attempts to delay the inevitable by taking pain to cast two Aquamoebas. On the 13th turn of the game, Justin casts his fourth Edict, then flashes it back and sends in his Swarm to finish of Nathan.

Justin West discarded first a no-land hand then a 1-land hand, finally keeping his 5 cards. Land was dropped on both sides of the table, with a second turn Mesmeric Fiend stealing one of Nathan's 2 Fire/Ices, leaving him with two circular logics and a Call of the Herd and a Fiery Temper, the setback was short, as the critter was Fired straight after.. A third and fouth turn Call by Nathan was not really appreciated by Bomber, who rallied with a Shambling Swarm. By Icing the Swarm, Nathan attacked for 6 points, but Bomber then cast Braids to make the game potentially interesting. Braids' first victim was on of the elephants, but she fell victim to the other when she was assigned as a blocker. The two remaining creatures killed one another in combat on the next turn, and then Nathan dropped an Arrogant Wurm which Bomber Vindicated. Nathan's Road of the Wurm was held in check by West's Mortivore (4/4), but the flashed-back Wurm looked dangerous until West found his Spectral Lynx. Russell's Careful Study caused him to discard a Circular Logic and a Wild Mongrel, and he then cast the newly-drawn Aquamoeba. West attempted again to cast Braids, but this time Nathan was ready with his Circular Logic. West later Reprisalled a Wurm, and dropped a Mortivore, but this was not enough to deal with Nathan's next two Wurm tokens combined with three Fiery Tempers.

Bomber finally gets to go first dropping a land, there was no first turn Duress, as these had been sided out in order to bring in artifact/enchantmant removal (Aven Cloudchaser and Cloudchaser Eagle) and fat blockers (Mortivore). Nathan looked good with four Basking Rootwallas in his opening hand, dropping one on turn one. Bomber's turn two Fiend briefly captured Nathan's Aquamoeba (selected over 3 'Wallas and a Fire/Ice), but even the Vindication of Nathan's only red source of mana could not prevent him Firing the fiend on the next turn. Nathan attacked and cast his 'Moeba, using it at the end of West's turn to bring two more Rootwallas into play for free. West's answer was a Shambling Swarm which was later Iced in order to let the three 'Wallas and the 'Moeba attack with impunity, the fourth 'Walla coming in to increase the damage of the Aquamoeba. West dropped to nine life by casting a Phyrexian Rager, and then tapped out to cast a Nantuku Shade. Nathan dropped his fourth land and attacked with four Rootwallas and an Aquamoeba. The Shade and a 'Walla killed one another, the Rager died when the Rootwalla it was blocking got bigger, and the swarm massacred the Aquamoba. Net result: 4 dead creatures and 2 damage to West (7 life total). An excellent draw by Bomber saw him drop a largish Mortivore (5/5), which would keep Nathan's flash-backed Wurm token at bay. Bomber sent in his swarm, hoping for it to be blocked, but Nathan let it through. Not to have his plans foiled, West cast Chainer's Edict on himself, electing to sacrifice the swarm, which managed to take with it 3 Rootwallas and a great deal of Nathan's hope. Nathan's draws consisted of land, while Bomber top-decked gold-literally- in the form of Vindicate, which took out the remaining Wurm token, allowing him to attack with impunity for two turns with the 9/9 Mortivore for the win.