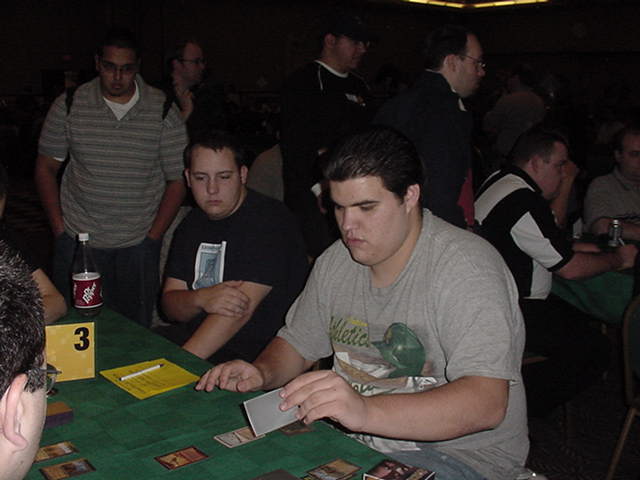 This quarterfinal match pitted two California amateurs against each other, but neither of these young men has played like an amateur this weekend. Kaare Anderson finished the swiss portion of the event in first place, with his only loss being to Rob Dougherty in the second to last round. This feat is even more impressive when you realize that 23-year-old Kaare had no byes, and didn't lose a single game on the first day of competition. Anderson, a mechanical engineer from the LA area, seemed quite happy just to have made the top eight with his PT Junk deck. The same can be said of Adam Lane, who squeaked into eighth place, narrowly beating Alan Comer on tiebreakers. The Sacramento native had just one bye, but his Three-Deuce deck performed well enough to make that irrelevant.

In the first game, Anderson played first and led with a Duress, taking a Rancor with "TIM" written on it large black letters. Adam later explained that he could not find the Rancors he needed anywhere, but at the last minute was able to borrow them from his friend Tim, who decided to add his name to the cards. The decorated Rancors became a lucky charm for Lane. Back in the actual game, Lane started with a Wasteland that would prove pivotal. Kaare could only Duress again, taking a largely irrelevant Land Grant, while Lane quickly summoned two Mogg Fanatics and a Druid Lyrist. Kaare held two River Boas, but took a few turns to get the needed land to be able to play them and regenerate. By the time the Boas came out, Adam had a Skyshroud Elite and Cursed Scroll in play, keeping full pressure on Anderson. The River Boas and a Wild Mongrel stabilized the combat field for Kaare, but the Scroll finished him off shortly.

Anderson sideboarded in four Pernicious Deeds, a good card versus Lane's many one and even zero casting cost creatures (Call of the Herd and Treetop Village), and one Phyrexian Furnace. He removed four Seal of Cleansing and only one of his three main deck Phyrexian Negators, which seemed to be a questionable choice when facing a deck with so many creatures, not to mention Cursed Scroll. Lane also removed his Seals, bringing in two each of Wax/Wane and Furnace. 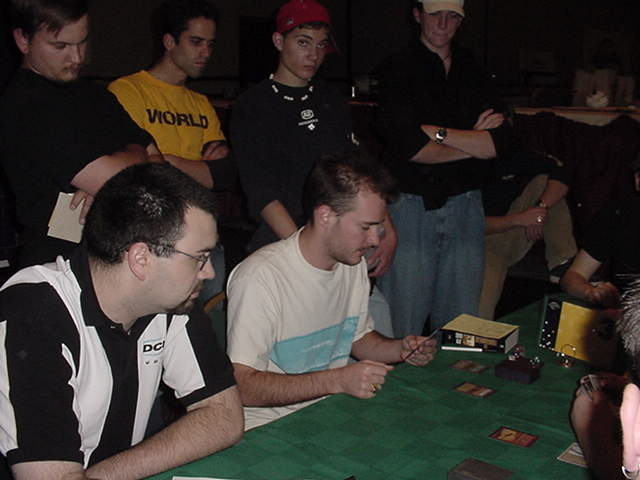 Kaare played first but it was Adam who got the faster start, with two Granger Guildmages. The competitors then each played a Call of the Herd. Anderson had a Pernicious Deed, but not a fourth land to activate it, allowing Adam to Wane it and keep his Guildmages. Anderson's mana trouble was even more apparent the next turn; his Treetop Village, Scrubland and Wasteland did not allow him to cast the two Vindicates in his hand, so he could only play Phyrexian Furnace. Perhaps it was the frustration of not having more land that caused him to forget to use the Furnace immediately, which allowed Lane to flashback his Call, which was the bottom card of his graveyard. Anderson then drew a Tithe, allowing him to get two lands, but chose to use his Wasteland on Adam's Treetop Village rather than play anything else. Lane continued attacking but decided to hold off on casting more creatures. Sure enough, Anderson had another Deed, which he played and immediately used, clearing the board. Adam then played River Boa and another Call of the Herd, which were met with a Vindicate and Spectral Lynx. Adam cast Swords to Plowshares on the Spectral Lynx, allowing him to continue to attack but nearly emptying his hand. Meanwhile Anderson was down to six life, but still had five cards in his hand, and looked ready to stabilize. However, Adam did still have a Cursed Scroll and Treetop Village. Anderson used his second Vindicate on the Treetop Village rather than the Scroll, and immediately regretted his decision, even half-heartedly asking to kill the Scroll instead. Even after using Gerrard's Verdict on himself to gain life, Kaare could not quite outrace the Scroll, especially when it was joined by Granger Guildmage. Kaare shook his head and shook Lane's hand, lamenting his mistake.

Anderson still didn't seem too upset, as between his amateur prize and top eight payout, he won $1500. Adam Lane advanced to the semi-finals, with a guarantee of over $2000 for himself. Not a bad weekend in Las Vegas for either of these up and comers.