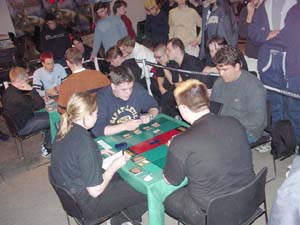 A match of the two best European players of the last season, it's hard to find a higher profile match at any GP. Jens is bringing a White/Black deck to the table with a lot of power rares like Grinning Demon, Akroma's Vengeance and Riptide Replicator. Kai is playing a fast White/Red deck with lots of fliers.

Jens plays first and mulligans to kick off the game.

Kai keeps and the quarterfinal of GP Copenhagen is officially underway. The first play of the game is a Cabal Archon that immediately earns a Chain of Plasma from Kai. Both players follow up with a morph creature. Kai then uses a Lightning Rift to take out Jens' creature. It turned out to be a Grinning Demon which Jens was unable to cast, stuck on three lands. More facedown guys are played.

Kai then topdecks a cycling land to kill Jens' once again, this time turning over a Cabal Executioner. At this point Jens' mulligan starts to show as he fails to play more creatures. Kai just attacks with his morph guys and turns them over at the end of the game. Skirk Commando, Skittish Valesk and Daru Lancer; Jens really didn't have many outs there.

Another game another mulligan. Jens shot a glare at Kai, Kai could only shrug and chuckle. When Kai attacked with his Disciple of Virtue on turn three, Jens tapped 3 mana and cycled a Sunfire Balm. 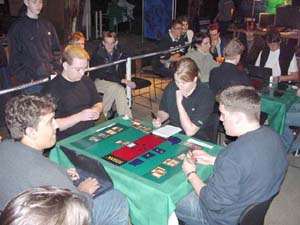 Jens was on the backfoot all game, his mulligan playing first made sure he couldn't keep up with Kai's creature rush. Jens died as he had no way to deal with two Gustcloak Harriers and scooped when Kai showed him an Erratic Explosion to the dome.

A rather unexciting match as Kai just rolled over Jens who couldn't really keep up due to his mulligans. Too bad a match between two great players couldn't offer more than that.

Final Result: Kai Budde beat Jens Thoren 2-0. As Dirk Baberowski lost his QF and Marco Blume failed to advance to Day 2 this now places Kai at the top of the player of the year race. Should we be surprised?