is Johannes first GP top 8 as he was an amateur coming into the tourney, while Kai has.... whatever infinite top 8's and almost as many wins. Kai is piloting a classic Ravager build while his opponent is running a less classical build of blue/white control with Pristine Angels and Worship main but those won't help too much as Kai seems to have a pretty good matchup. But then Johannes only dropped one match the whole weekend, to a Ponza deck, so we'll see what happens. They both are germans so don't except too many quotes this time but I'll do my best to remember some of what I've learned during seven years in school.

Johannes wins the die roll and keeps his hand, so does Kai. Johannes surprisingly has a turn one play as he imprints a Mox with Worship and plays a Silver Knight sending it in versus Kai's Worker on turn two before dropping another one. Kai just casts a Ravager on turn two and that's enough to stop Johannes assault. Kai gets a good draw with the Skullclamp engine going on, while Johannes only has white mana sources and a Leak and another Plains in hand. Basically the game is over unless Johannes draws a Matrix which his deck doesn't deliver, but it's kind enough to give him a Pristine Angel. Kai who has six cards in hand at that point shows me all lands. Johannes draws a Flooded Strand and sends his Angel in bringing Kai down to fourteen. He sacs his Enforcer equiped by two Clamps to the Ravager then sacs a Frogmite but Johannes has the Mana Leak for Kai's Disciple. Kai is still able to drop a Worker, a Frogmite and an Enforcer before passing the turn. Johannes sends in the Angel again and plays a Mox to untap it but Kai ends the game on the following turn by droping two more Disciples. 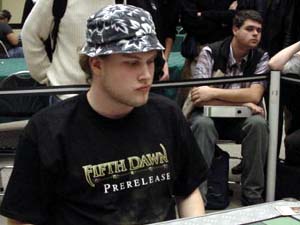 No mulligan this time. Kai gets a Sphere into play on turn one while Johannes just plays a couple of lands. Kai then plays a Worker followed by a Skullclamp which gets Mana Leaked but Johannes doesn't have a third land and has to imprint a Mox with Pristine Angel to cast a morph while Kai plays a Ravager and a Frogmite. Johannes is again screwed and just passes without doing anything. Kai sends Frogmite in for two points and just says go with Thirst for Knowledge mana open. Johannes has his own Thirst for Knowledge and he discards a Mana Leak and a Wing Shards. He finally gets to play a third land, a Flooded Strand, which he sacs to get a second island and unmorph the Angel but Kai has the Shrapnel Blast to get rid of it. He then sends in the Ravager along with the 2/2 in the red zone bringing Johannes down to twelve. The amateur doesnt have a Wrath, he actually doesn't even have a play and just lays a Coastal Tower while Kai EoT Thirst before playing two Thoughtcasts during his own main phase. He drops an Enforcer but Johannes Purges his two guys in response. Kai Detonate's the Mox and Johannes plays a Silver Knight which gets a thumb up from confident opponent. The Enforcer gets purged as well but it doesnt seem to matter as Kai has five cards in hand to Johannes zero, whose deck fails to give him any answer and its only a matter of time before the game is over.

Kai wins 2-0 and advances to semifinals while Johannes collects the amateur first prize and will be heading back home with $2300.