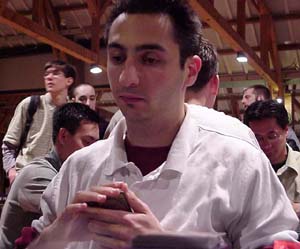 Playing off in this quarterfinal were Kai Budde and Raphaël Lévy. They have played multiple times before and generally, Lévy has not been very lucky. Raphaël exclaimed "OK, let's hope I can break the curse," after having won the die-roll. Then he started pondering whether to play or draw.

The draft didn't go very well for either of these players, Kai ended up fighting Christoph Lippert (who was to his right) for red-green and Raphaël, while in a good seat, didn't get very many of the cards you're looking for in blue-white.

The first turns passed by playing lands and joking about Woodland Druid. Eventually, the first spell of the match came from Raphaël, playing a turn three Pilgrim of Justice. Kai raised an eyebrow, and Raphaël started giggling about Longhorn Firebeast. Kai drew a card played his third land and a Longhorn Firebeast, and more giggling ensued. Needless to say, the fierce 3/2 remained in play. You could sense that this was a friendly match.

Seeing how he had the ground locked up, Raphaël tried for some airborne offense with a Balshan Collaborator, most likely the worst 2/2 flier for 4 mana in blue-white. Budde Flamebursted it, Lévy played Hypocondria and Kai untapped and played Lithatog. But it still probably wasn't the pace Kai was hoping for.

Lévy drew and passed the turn with a hand full of high caliber instants. Budde drew and dropped Arrogant Wurm. When Kai passed the turn, Raphaël Repel'ed the Lithatog, clearly representing the Second Thoughts he had in his hand.

Deciding he had to do something against Kai's board of Krosan Archer, Lithatog, Arrogant Wurm, Cartographer and the almighty Longhorn Firebeast, Raphaël played a land, then cast Psionic Gift on the Pilgrim and played a Mystic Familiar. He left an Island and a Plains untapped and passed the turn, this time representing the Aether Burst he also had in hand.

And then the beatdown began. "Time to serve", said Kai, and moved all his creatures into combat. Raphaël started thinking. He would be doing this a lot within the near future. Kai was holding five cards in his hand and had five lands untapped. Eventually, Raphaël decided that Pilgrim of Justice would block Longhorn Firebeast while the Mystic Familiar blocked the Lithatog. This meant Raphaël took eight, no creatures were harmed in combat except for the Lithatog, which was shot by the Gifted Pilgrim before Kai exited his combat phase(causing Kai to sacrifice a land).

Kai considered his options and then settled on playing Chainflinger. Some would consider this as one of the best cards versus blue-white. Some would probably also say that Italians can't draft, but that's another matter.

Things weren't looking good for Lévy, so he thought for quite some time. He checked: "Four cards in hand?" "Yeah," retorted Budde. Lévy then played Graceful Antelope and once again passed the turn keeping a Plains and an Island untapped.

At this point, Olivier Ruel turned around from his quarterfinal to see what was going on in Kai's game. Kai held up Longhorn Firebeast in silent reply. Olivier turned back to focus on his own game.

"The green mage, y'know... every turn... just have to swing," Kai was all smiles bringing his creatures into combat. Raphaël blocked and Kai cast Rites of Initiation and discarded four cards. Lévy started doing the math, but Kai just shook his head.
"No."
"No?"
"No."
And Raphaël scooped up his cards.

Olivier Ruel turned around to see what was going on. Budde showed him just that by holding up the Longhorn Firebeast

Budde tapped all his creatures. "The green mage, y'know.. every turn... just have to swing." Lévy thought about it for a while. Blocked and Kai cast Rites of Initiation and discarded his hand. Lévy fell back into thinking: Budde, "No," Lévy "No?" Budde "No." And after some short math scooped it up.

"Welcome to the Top 8, Longhorn Firebeast"

And then they were a-shufflin'

This time around, Lévy chose to draw.

"I don't think I have too much to fear from your... um.. beatdown.
"
At three lands, Budde played Cartographer, Lévy drew, smiled, asked how many cards were in Kai's hand and then thought some more. He explained his pensive mood: Kai was always lucky against him.

Raphaël eventually cast Coral Net on the Cartographer, hoping that Kai didn't have the Arrogant Wurm in his hand. Kai didn't though. And the Cartographer went to the graveyard. Kai did, however, have the infamous Longhorn Savage 3/2 Beatdown that made Raphaël pay five life.

With nothing on the board, Raphaël played Balshan Collaborator. Budde untapped, Flame Bursted the Collaborator and played Wild Mongrel. Lévy answered by playing Militant Monk. Kai untapped and swung for two and then played Lithatog. Raphaël untapped, cast Auramancer and got back the Coral Net. The net was then replayed on the Lithatog.

"Well, you've got some vicious combos in your deck too," said Kai before sacrificing his Lithatog.

After stabilizing the board with Hypochondria and Graceful Antelope, Lévy was only looking for a window to start locking Kai down with the Antelope, he got that soon after as Kai activated his Chainflinger first end of turn on the Militant Monk, and then again in his main phase. The Monk died and the Mongrel was Aether Bursted. And the Antelope swung and turned a mountain into a Plains. Now all he needed was 14 more turns.

Kai tried to replay the Wild Mongrel and Raphaël Syncopated. Kai played a Halberdier with his last Mountain. Then when Auramancer decided to attack Kai sacrificed his Druid Lyrist to destroy the Hypochondria. "Before blockers?" joked Raphaël, and Kai nodded. In response, Raphaël sacrificed it targeting his attacking Auramancer. "Still before blockers," said Kai, and played Muscle Burst. When Raphaël Aether Bursted the Halberdier and Kai only had one non-Plains land in play it was more than over. Kai preferred to concede.

Kai chose to play first, hoping for his combo. "Come on, Mongrel Wurm, time to go." 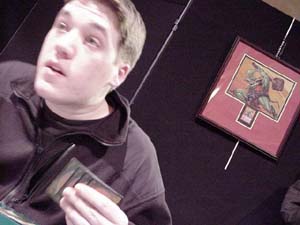 There was indeed a turn two Wild Mongrel, and everybody at the table - including the table judge - said "Of course." However, nothing happened turn three. Raphaël played a Reborn Hero and Kai Flamebursted it at end of turn. Then Kai played a Nantuko Disciple. Raphaël played an Aven Fisher and passed the turn. Kai sent in the Mongrel and pumped it up with the Disciple. Raphaël dropped to 12 and Kai played a Halberdier. Raphaël Psionic Gifted his Aven Fisher and killed the Halberdier. Then played a land and a Gray Ogre/Auramancer.

Once again the Mongrel came over and was pumped by the Disciple. Kai tapped four lands and played Chainflinger. Raphaël untapped. He finally attacked with the Auramancer. Kai shrugged and adjusted his life total to 18. Raphaël did nothing but pass the turn with four islands and a Plains untapped. It was no secret what was in his hand. And it was no secret that Kai Budde was the biggest miser ever when he drew Petravark from the top of his deck.

Time stopped. Budde commented, "How lucky." Noah Boeken yelled aloud that it was the luckiest thing ever. Tomi Walamies called my cellphone to tell me Kai is a miser and Raphaël's Plains was removed from the game.

Raphaël cursed, Kai smiled, Raphaël cursed some more and floated a white mana, and then cursed again. Kai reached for a mint from his pocket and started explaining in German to Christoph Lippert what just happened.

Raphaël prevented three to his Aven Fisher with the Hypochondria and Kai attacked with his Wild Mongrel and his Chainflinger. The Aven Fisher blocked the Chainflinger, which Kai pumped with his Nantuko Disciple to have it survive and Raphaël went to six.

Raphaël untapped and looked at the board. "Come on Plains," said Kai. Raphaël drew a plains, played it and passed the turn. He was caught in the Second Thoughts-lock, where he dies if he does anything and dies if he doesn't do anything.

Kai cast Nostalgic Dreams to get his Flame Burst back, then simply said "go". Raphaël untapped and Kai started mocking him for forgetting to shoot him with his Psionic Gifted creature.

The following turns, both players did nothing except take turns shooting each other for one. A very bad trade when one player is at 5 and the other at 17. And the player at 17 is holding a Flame Burst.

Then Kai broke the race by declaring a spell: "The almighty Longhorn Firebeast." Lévy put it in the graveyard and extended his hand. And Kai wins etc.