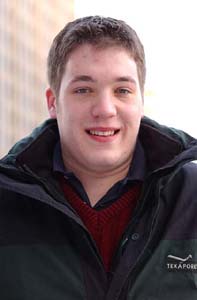 Kai Budde was wiped out of his last Top 8 in the first round, but is all but guaranteeing that it won't happen again. He wants to face Finkel in the Semis, and feels that dispatching of William Jensen to get there will be simply a formality.

He's probably right. Thanks to some indecision on the part of Bram Snepvangers, Kai ended up drafting both black and red, and his deck is chock full of removal. Jensen, on the other hand, drafted mostly red and then moved reluctantly into white; his deck lacks the depth of Kai's. Both players did a little "metagaming" against one another; Kai has two Misery Charms main against Jensen's Clerics, and Jensen has a Crown of Awe.

Budde kept an opening hand containing no red mana, but still managed to play creatures on turns two and three before drawing a Forgotten Cave and playing a Charging Slateback face-down on turn 4.

Huey used some removal spells to kill everything of Budde's except his Boneknitter, but Budde quickly reloaded by dropping a Thoughtbound Primoc and a Sparksmith. Huey answered with a Daunting Defender, keeping his Battlefield Medic safe from the pinging Goblin. On his next turn, Huey went for the throat by playing his main deck Crown of Awe on the 3/3, and made things worse by showing his morph to be a Daru Healer when Budde tried to kill it with Sparksmith.

Huey made two new morphs, and Budde was saddened to see that one of them was a Blistering Firecat on the next attack. Budde had a Sparksmith, a Shock, and a Misery Charm, but thanks to the Crown of Awe and the two healers, he had no way to remove the Firecat, which trampled over his Boneknitter for the game.

With another draw like that, Jensen has a real shot at the upset win.

Jensen had a fast start: Goblin Sledder, Disciple of Grace, and two morphs. Budde had a Severed Legion, a Nantuko Husk, and a Cabal Archon, but the Disciple was keeping him from winning the damage race.

Jensen killed the Legion with Erratic Explosion and then dropped out two more creatures, quickly emptying his hand. Budde could only shake his head.

Budde played out a face-down creature, but Jensen ripped a Shock off the top and killed it a turn later.

"You're the best," said Budde, dripping with sarcasm. He had enough land untapped to reveal his Fallen Cleric in response and sacrifice it to the Archon, bringing Huey to 10.

On Huey's next turn, he sent with the team. Kai blocked the biggest attacker with his Archon and took the rest, going to 4. The Archon drained Huey for two just as it died, and then Kai had to go for it.

With nothing left in play, Kai aimed a Shock at Huey's dome, taking him to six. Kai was holding Searing Flesh, and needed to draw land #7 to end the game. 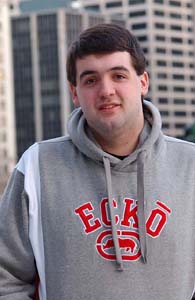 Jensen had his typical start of Sledder, morph, morph in the third game, but Budde had the ultimate Zombie draw, with Severed Legion, Festering Goblin, Boneknitter, and Shepherd of Rot in play by turn four.

Jensen dilivered a big blow to Budde when he Threatened the Festering Goblin, attacked with everything, then sacced the Goblin to his Sledder, killing Boneknitter. Budde came back strong with a Cabal Archon, which could turn his Shepherd and his Disciple of Malice into little Drain Lifes. Budde drew Dirge of Dread, Shock, and Misery Charm, and all put together, could deal way more damage to Jensen than necessary.

Budde drew one of his bombs in game 4, Rotlung Reanimator. He triggered it once by hitting Jensen's Battlefield Medic with a Misery Charm. The Reanimator looked to dominate with the number of Clerics between the two decks.

Jensen had a shot, however, as he had drawn Crown of Awe again, and used it to make an unstoppable Battering Craghorn. But the killing blow came when Jensen dropped his Daunting Defender.

You see, Kai had his second Misery Charm in hand. Down went the Defender, Kai got another Zombie token, Shepherd of Rot was activated for 5, and Budde's team entered the Red Zone.

Final Result: Match to Budde, who will face the winner of Finkel-Reinhardt in the semifinals.