Amateur Keith Thompson looked a little shell-shocked as he shuffled up for his match against Josh Wagener. He wasn't expecting to get this far, and now there's an awful lot on the line. He was comforted by the amateur money he was assured of receiving, and tried to put on his best game against The Champ. Wagener was quite the opposite, relaxed, even outwardly confident in his matchup: The red-green mirror. 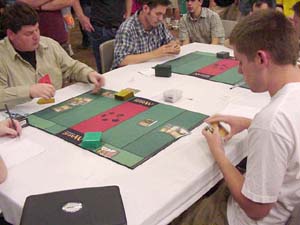 Thompson won the die roll and led off with a mountain and Grim Lavamancer. It got in on his second turn but he had nothing to follow it up with. Wagener was more fortunate, and had the Mongrel. On Thompson's third turn he could muster nothing better than a Volcanic Hammer to the face. Wagener beat in for two and passed it back.

Thompson pulled up a Call of the Herd and made a token. Wagener was ready at end of turn with a madnessed Violent Eruption, clearing his board. His turn brought out a Phantom Centaur, and things were looking dire. Thompson sent a Firebolt to the dome and played a second Call. Wagener dropped it with Volcanic Hammer and hit for seven. He played a Call of his own and seemed to be running away with things.

Thompson tried to stabilize with a Basking Rootwalla and a Call token, but Wagener swung in regardless. The token blocked the Mongrel, which Wagener saved by pitching City of Brass and Basking Rootwalla. Then he flashed back his Call. It was nothing short of a slaughter.

Thompson had to send back his first hand, and then his second. He kept his five cards with a shrug. Wagener's fans were already celebrating his supposed victory. 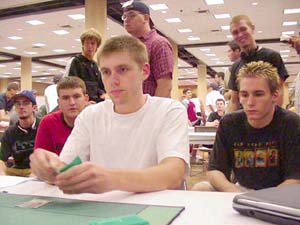 "Hey, I came back from a double mulligan just to BE here." – Josh Wagener

Thompson opened with Shivan Oasis, and then Firebolted Wagener's Grim Lavamancer. He replaced it with a Mongrel. Thompson stalled on two lands for a turn, allowing Wagener to bring an extra Mongrel to bear. Finally Thompson got on the board with a morph.

Wagener played the fast game, charging in for four and playing a Call of the Herd. This meant he couldn't foil Thompson's Elephant Guide with Violent Eruption, which turned the morph into a mighty blocker. Wagener was undeterred, though, and swung in. A Mongrel was blocked, but the other grew to 4/4 from a pitched Birds and City. Thompson fell to seven. Wagener flashed back his Call, meaning another attack would finish it.

Thompson bought a reprieve with Ensnaring Bridge, but the Eruption in Wagener's hand meant he didn't have much time. Shortly thereafter Wagener pulled up a Firebolt, and the match was his.