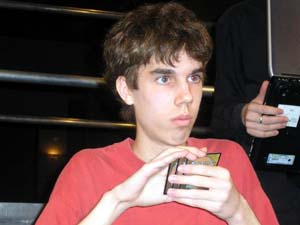 Rookie Ryan Cimera earned his invitation to this Pro Tour at Grand Prix-Seattle, scoring amateur money along with a chance to tackle the biggest game. He played white weenie this weekend, a deck most players dismissed as obvious and unable to contend with the major control decks. His presence here is a wake-up call for the upcoming PTQ season.

Facing him is Japan's Kenji Tsumura, one of Japan's brightest rising stars. He first came into the public eye as a member of the Japanese National Team. At Worlds, he made a series of critical errors against the Belgian and German teams, costing Japan a place in the finals. Rather than wallow in his mistakes, Tsumura rededicated himself to the game. His studies paid off, as he and his teammates from One Spin Top 4'd both Grand Prix-Osaka and Pro Tour-Atlanta. His deck this weekend is designed by Itaru Ishida, and Olivier Ruel calls him the best player in the Top 8. That's a lot to live up to.

Cimera started with quick beats thanks to a curve of Lantern Kami, Samurai of the Pale Curtain, and Tallowisp. Tsumura was beaten down to nine before firing off an end-of-turn Gifts Ungiven for Heartbeat of Spring, Sakura-Tribe Elder, Sensei's Divining Top and Kodama's Reach. He got the Reach and Elder, untapped and played both.

Cimera kept up the pressure with Umezawa's Jitte. Before things could get any crazier, Tsumura swept the board with Final Judgment. Cimera's hand was short on monsters. He played Samurai of the Pale Curtain and equipped it.

The momentary reprieve was all Tsumura needed. Soon he had a clear board and was powering Meloku, the Clouded Mirror with a Heartbeat of Spring. A swarm of spirits cut Cimera down from 20 to 0.

In the second game, it was Tsumura's turn to be on the wrong end of things. Cimera led off with Isamaru and Hokori, Dust Drinker. Tsumura thought he was safe behind Hideous Laughter, but Cimera had extra copies of both to lock him up again. Unable to get access to the mana he needed, Tsumura succumbed.

The pace of the third game seemed to favor Tsumura. Cimera's first threat was Eight-and-a-Half Tails, allowing Tsumura to Reach before he'd taken any damage. Cimera did have the Jitte to follow things up, sure to complicate things if it got online.

Tsumura played another land and gave the turn back. Cimera, as expected, equipped and swung, but when Tsumura tried to bust up the party with Hideous Laughter, Cimera was ready with Indomitable Will. Tsumura accepted the pain and dispatched the legend with Horobi's Whisper while Cimera was tapped out. 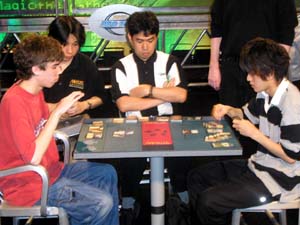 Cimera rebounded with Kami of Ancient Law and equipped it. Tsumura took his time, Reaching again and giving Cimera another attack. He dutifully hit for six, recharging his Jitte, but made no other play. Tsumura played an expected Gifts Ungiven. He gave Cimera his pick of Cranial Extraction, Wear Away, Hero's Demise, and Time Stop. Cimera let him have the latter.

Tsumura untapped and Reached yet again. Cimera tried adding Hokori to the mix but only got his board swept by Final Judgment. He had no other play, and things were firmly in Tsumura's hands. He got a Divining Top working, and a Sakura-Tribe Elder. Cimera found himself another Kami of Ancient Law, but Tsumura Time Stopped it away.

He untapped, drew, then swapped his Top for another card. He busted out Heartbeat of Spring, then Extracted Cimera's Hokoris, spicing on a Wear Away for the Jitte. In Cimera's hand were another Jitte, two Blessed Breaths, Shining Shoal and Indomitable Will. Cimera found himself an 8.5 Tails and Jitte'd it up, but it hardly mattered. Tsumura had yet another Final Judgment.

Meloku soon followed, and with him many, many fliers.

Cimera led with a saucy start of Isamaru and Umezawa's Jitte. He hit for two, and then four and added a Kami of Ancient Law. Meanwhile Tsumura was stuck on a board of two swamps, an island, and a Top that refused to serve up the goods.

He Topped again and put out a Plains, but still took 10 on the next swing in. At 2, he played Cranial Extraction just to get a peek at Cimera's deck before scooping it up. 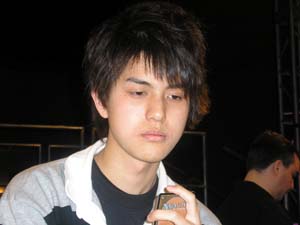 Kenji is becoming a Sunday staple.

Cimera's start in the final game was the dynamic duo of Isamaru and 8.5 Tails. Tsumura Reached and took his pain. Cimera hit for four and passed on three mana. Tsumura made no play and ate another four damage down to ten. When Cimera again sat on his three mana, Tsumura threw out an end-of-turn Gifts Ungiven.

He presented Cimera the choices of Cranial Extraction, Hideous Laughter, Kodama of the North Tree and Hero's Demise. Cimera let him have the two kill spells. He hit Cimera's team during upkeep, and had nothing to fear from Cimera's next play of Hokori, Dust Drinker. He played a Sakura-Tribe Elder and Demised the legend during upkeep.

Cimera tried to rebuild. He started with another Isamaru, then added Kami of Ancient Law and Empty-Shrine Kannushi. A second Hideous Laughter sent them all to the bin. Cimera tried again with another Kannushi and a Lantern Kami. After they hit for two, a second Gifts sent another Extraction and a Meloku to the bin, and gave Tsumura Hideous Laughter and Heartbeat of Spring.

Tsumura untapped and dropped the Mana Flare, and powered out the Myojin of Many Cards, leaving himself a lone forest untapped. The Lantern Kami came over for one, and then Cimera dropped a pair of elbows: Hokori, Dust Drinker and Kami of Ancient Law to dispatch the Heartbeat of Spring.

Tsumura wouldn't go lightly. He tapped for two green and showed Wear Away on his own Heartbeat, splicing on Horobi's Whisper for the Winter Orb. His joy at the coup was short-lived, however, when Cimera tapped another land for Blessed Breath. 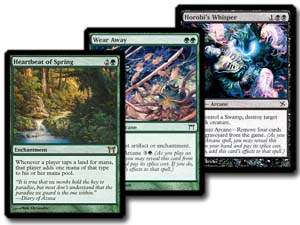 And here is where things went disastrous.

Olivier Ruel, excited moments ago that he could be playing against White Weenie in the semifinals, saw the play develop and turned away.

He did. However, the Wear Away that would kill his Hokori was very much a green spell. Victory had turned to defeat in a single syllable. Tsumura took the game handily from that point.

Kenji Tsumura defeats Ryan Cimera 3-2, pocketing $2,500 and a seat in the semifinals.

2 Cage of Hands 3 Indomitable Will