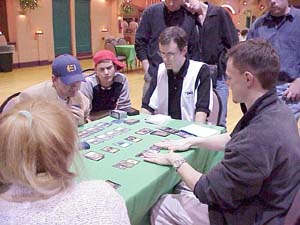 Adam Prokopin vs. Koby Kennison Welcome to the Top 8! We have an interesting match-up between 2 players who have similar magical backgrounds. Both have done well at a previous GP, Adam making top 8 at Detroit while Koby finished second at Indianapolis, the only other good finish belongs to Adam who made a Top 8 at a JSS world championships but Koby counters with the fact that he is the local favorite because well... he lives in Tampa. As far as how the draft went for these players Adam sported a U/W deck that contained Possessed Aven, Cephalid Looter, Compulsion and Hallowed Healer, while Koby stepped up to the plate with a G/B/U deck that had Cephalid Broker, Puppeteer and assorted green fat and black removal. With both players seated and ready to brawl, we move on to the action.

Adam wins the die roll and decides to play first and came out the gates blazing with Patrol Hound and Militant Monk. Koby was unfazed even though he had no early creatures as he went to Crippling Fatigue the Hound and then next turn made a Cephalid Broker. Adam tried to keep the beats strong as he played a 4th turn Treetop Sentinel and would have played a 5th turn Aven Flock but was not able to pluck the needed land off the top of his deck. The play began to get heated in the following turns as both players tried to achieve a certain game status, Adam trying to push on harder with his tempo and Koby trying to attain a stabilized board.

Koby began his plan by trying to Ghastly Demise the Treetop Sentinel but Adam would have none of that as he saved it with Shelter, but Koby was insisted that the flyer had to die so the following turn he cast a flashback Crippling Fatigue combined with an Afflict on the annoyance. Adam was much better at keeping his game plan in check though as the monsters kept coming off the top of his deck and then hitting play, one of which was a Possessed Aven. Koby had made a Grotesque Hybrid to buy him sometime but stood at a lowly 4 life because of the early beats he received and multiple flashed back Fatigues and eventually succumbed to the swarm of Adam's creatures. It was very interesting to see how fast Adam's deck had applied pressure with a color combination that is normally a much more slower and controllish, I wondered if he would be able to have a repeat performance in the next game... 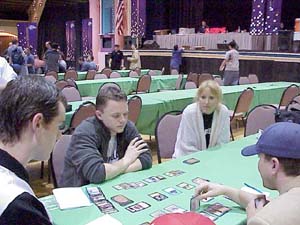 Koby Kennison Sideboarding was taken advantage by both players, with Koby taking out the subpar Whispering Shade and putting in a Screams of the Damned. Adam took out a Pilgrim of Virtue and put in a Cephalid Aristocrat. He made that change presumably to block Koby's fat creatures. This game started with Koby taking a mulligan. Adam's first play was Patchwork Gnomes on turn three. Koby Crippling Fatigued the Gnomes on his turn. Adam was then unable to draw a 4th land, but made a Hydromorph Guardian. Koby broke the game open next turn by playing a Cephalid Broker. Due to Adam's mana screw, Koby was able to take full advantage of the game with his Broker by digging for a Grotesque Hybrid, which he promptly played. Adam couldn't find a land to save his life, and even the Compulsion he played on his next turn was brought into play with disgust.

Koby swung with the Hybrid and then made a Puppeteer. Adam again failed to draw a land, but drew a Plains off his Compulsion (discarding a Patrol Hound), and promptly played a Mystic Visionary. As if the game didn't look bad enough for Adam at that point, Koby took out the Visionary with an Afflict, and flashed back the Fatigue to cripple the Guardian, which cleared the path for his Hybrid. Adam drew a fifth land, and as a last ditch effort played a Possessed Aven to try and staunch the flow of blood. Koby was not worried at hall, because he had a thresholded Patriarch's Desire in hand. He calmly swung with his team, and due to the massive card advantage gained by Koby this game, Adam conceded on his following turn. 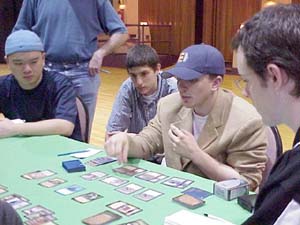 Adam ProkopinAdam chose to play first, seeking revenge for his mana screw. He came out pretty decently with a second turn Compulsion and a third turn Reborn Hero. But Koby did him better by playing a second turn Werebear, third turn Crippling Fatigue (killing the Hero) and fourth turn Soul Scourge (powered by the Bear). Adam, who was not pleased with Koby's fast start, tried to stabilize the board with Treetop Sentinel and Mystic Zealot on turns 4 and 5 respectively. He made a decision to try and regain momentum by swinging with the Sentinel, thinking the Zealot would lock the ground. Koby savaged Adam by swinging with the Scourge, and then dropping Puppeteer and Organ Grinder on his 5th turn, both of which a Blue/White player don't like to see on the opponent's side.

Things weren't looking great for Adam, and he was forced back onto full defense. Staring down the large toughness creatures, Koby could only play a Think Tank and pass the turn back to Adam. At the end of that turn, Adam activated Compulsion multiple times, digging deeper into his deck for answers to break the game open. Adam found an Aven Flock, which he promptly played, but Koby answered with a five casting cost creature of his own: the game-breaking Grotesque Hybrid. With Adam at 13 life and Koby at 18, it looked like Adam was in deep trouble. Koby tapped down the Sentinel and Flock with the Puppeteer, and swung with his five casting cost black creatures. Adam had a trick up his sleeve, using a Spirit Flare to allow his Zealot to kill the Scourge, negating the entire attack.

Adam then compulsioned into Threshold to give him Zealot +1/+1 and flying, and then debated for a long time whether to attack or not. He eventually decided to bring it for seven, sending in the Zealot, Flock and Sentinel, which brought Koby down to 11. With his 2 mana remaining after Compulsing into threshold, Koby summoned a Mystic Visionary. Usually this attack would seem overaggressive, but Adam needed to kill Koby quick, in order to race the Organ Grinder, which would eventually kill him should he hold back. To help this plan, Adam was holding an Embolden, as a surprise to swing the life totals in his favor the next turn. Adam's game plan was horribly short lived, as Koby cast a ton of spells and used a lot of effects, which included Ghastly Demising the Mystic Visionary, Casting Vivify on one of his own Islands, giving his Hybrid flying multiple times in order to give his Werebear threshold, and then swung for the game with the extra six damage provided by the surprise measures (3 from the Bear and 3 from the land). This gave him a total of 14 damage and the match. Adam could do nothing but extend his hand and congratulate his opponent in this semi-final match.