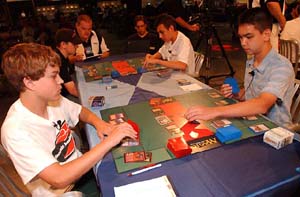 Josh is no stranger to the Feature Match tables, but neither player has seen Feature Match tables like this. There are lights and cameras everywhere, and both players comment on the theme music that played before the match. But if they're nervous, it sure isn't showing as the players shuffle their cards.

Kyle led with a Tranquil Thicket, and Josh went down to 19 from his Karplusan Forest for a first-turn Grim Lavamancer. Kyle's second land was a plains, and he allowed Josh to play a Wild Mongrel as well. He threw down an Astral Slide on his next turn and passes to Josh.

Josh attacked with the Mongrel and the Lavamancer, discarding a Basking Rootwalla and a Violent Eruption to deal 10 points of damage to Kyle almost immediately. Josh used the madness mechanic in an incredibly skillful manner – he's almost completely unfazed by the lights and the cameras.

Kyle's only play on his turn is a Nantuko Monastery. Josh left a green floating after tapping his Mossfire Valley to Firebolt Kyle, then attacked – but Kyle cycled away Renewed Faith to remove the attacking Basking Rootwalla from the game. Kyle played another Astral Slide on his turn.

Josh attacked again with the Rootwalla and the Wild Mongrel, but Kyle used the Astral Slide to remove both from the game. Josh said, "I'll Firebolt you," casually, bringing Kyle to 5, then used his Grim Lavamancer's ability to deal more damage to Kyle.

"After the end-of turn trigger goes on the stack, I'll cycle Slice and Dice," Kyle said, "and kill your Grim Lavamancer." Josh replied with a flashed-back Firebolt on his turn. When Josh attacked again, Kyle cycled a Secluded Steppe to remove the Mongrel from the game. During the rest of his turn, Josh played a Wild Mongrel and a Llanowar Elf. In response, Kyle cast a Renewed Faith. Josh just shrugged and played another Wild Mongrel, leaving one card in his hand.

Kyle played a face-down morph, which promptly was forced to block an attacking Wild Mongrel. Josh pumped the Mongrel with Call of the Herd, and Kyle cycled away a Forgotten Cave to remove Josh's Mongrel and his own morph, which turned out to be an Exalted Angel. Josh flashed back the Call of the Herd and passed the turn with one card left in his hand. 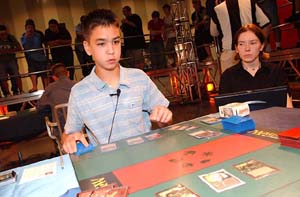 Kyle attacked with the Cartographer and the Angel, taking Josh to a perilous 8 life. Kyle then played a Teroh's Faithful to go back up to 15 life, and played and sacrificed a Wooded Foothills. With one more mountain on the table, he must have felt much more confident. He cycled away the Secluded Steppe again to remove his creatures, then returned Forgotten Cave to his hand at the end of the turn.

Josh drew his card, surveyed his options, and conceded as he realized that things looked pretty hopeless.

"How come we don't get a camera?" Kyle quipped as he and Josh shuffled for their second game. He was, no doubt, referring to the camera hanging over the other Feature Match area, where Sam Stein and Richard Oleksak were waiting to begin their second game as well.

Josh led this game with a Mountain and a Grim Lavamancer. He attacked on his second turn, but did not follow it up with a second-turn play (such as a Wild Mongrel). Kyle, meanwhile, was simply playing more lands – he ended his second turn with a plains, a mountain, and a Lightning Rift in play. 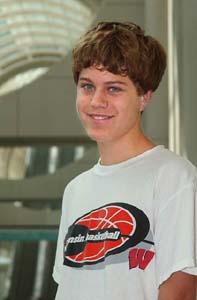 Josh attacked with the Lavamancer again and then cast a Volcanic Hammer at Kyle, who went down to 14. Kyle then cycled away a Slice and Dice to slay the Lavamancer. Josh kept the offense going, though, with a Violent Eruption at Kyle's head, taking him to 10 life.

"You don't have anything?" Kyle asked as he cycled away Krosan Tusker, dealt two points of damage, got a forest, and drew a card. Somehow, that felt like cheating, even though all plays were perfectly legal. Josh shook his head and kept throwing burn at Kyle's face, following up his previous Violent Eruption with another.

Kyle tossed off a second Lightning Rift and an Exalted Angel, but Josh's next play was a Static Orb. Kyle's Angel went on the offense, as Josh shook his head again as his poor luck. After playing a considerable amount of land, Kyle eventually cycled away a Forgotten Cave and a Secluded Steppe to deal just enough damage to finish Josh off.